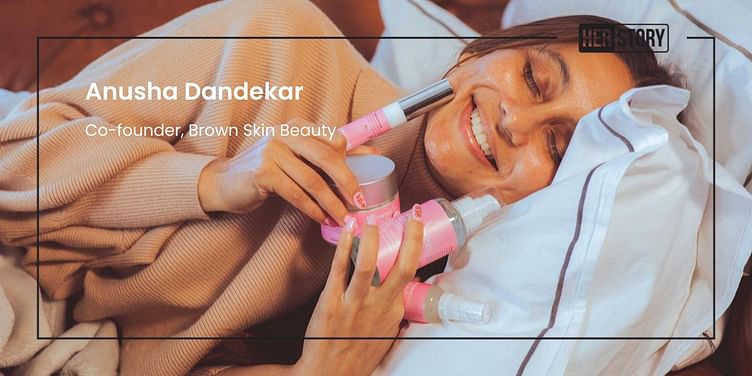 On Women Entrepreneurship Day, HerStory catches up with Anusha Dandekar, the co-founder and CEO of Brown Skin Beauty, to know more about her quest to break the stigma against brown skin. Anusha also talks about being an artist and an entrepreneur and the difference between the two.

Anusha Dandekar is known for being a VJ, actor, television host, and judge on India’s Next Top Model; however, her entrepreneurial side is often overlooked. While in the past, Anusha has partnered with lingerie brand PrettySecrets to come up with her own line, she recently co-founded ﻿Brown Skin Beauty﻿ skincare line amid the pandemic.

The beauty venture completed its first anniversary on November 14. This Women Entrepreneurship Day, Anusha speaks to HerStory about starting a skincare brand specifically made for women with brown skin.

Breaking the stigma around brown skin

Talking about Brown Skin Beauty, the co-founder and CEO says, “I have always resonated with fashion and beauty because that’s where I started from, doing shows like Style Check, India’s Next Top Model, Supermodel of the Year. While I’ve always been surrounded by it, I never actually thought of starting a skincare line.”

“People always expected me to start a clothing line. Skincare and beauty is already such a crowded market, it’s seasonal and I didn’t know if I wanted to focus so much on that. But as I went through my journey of growing up in Australia and being in India all this time, I realized that there is one dominant problem in the beauty industry which is that we only focus on light-skinned women who probably make up only 0.5% of the country,” she adds.

The turning point, according to Anusha, was when she saw an advertisement where a woman's photo was photoshopped to a point that she appeared white.

Growing up as a brown-skinned girl in Australia, Anusha shares how she loves getting a tan but when she came to India and got into showbiz, she realised how young women faced difficulty in embracing their skin colour because they are bullied about it.

“Over the years, it all just built up and I decided to do something about the stigma against brown-skinned women. So, when the pandemic hit and slowed everything down, it gave me time to focus on building this brand as I wasn’t shooting and traveling continuously,” she adds.

We started in June, I was in LA and my business partner Gaurav Kumar was in Mumbai and we decided to move with it. I knew right from the start that I wanted to call it Brown Skin Beauty, that’s what I want to tell brown girls in India and the rest of the world that ‘you are beautiful',” says Anusha adding that the brand’s tagline puts it aptly – “Whatever your brown, it’s beautiful” – busting the myth that all skin tones of brown and not just the deeper and darker tones are beautiful.

Starting a brand that focuses on brown-skinned people, in a world that obsesses with light skin colour, can be quite a challenge. Anusha shares that she was up against all odds.

“Is everybody ready to accept themselves just the way they are?'' was a big question for us. I specifically wanted to focus on brown-skin issues like hyper-pigmentation, melasma, dark-circles etc,” she adds.

Brown Skin Beauty offers a range of cruelty-free, parabens and SLS free skincare products. The line is made with a mix of natural and chemical ingredients. It comes in glass packaging and its products range between Rs 275 and Rs 899.

Anusha states that she was determined to keep her products affordable. “We are making sure that we use the best ingredients to make it effective but also affordable. I grew up in Australia watching pop culture. We watched our favourite people wear things that we wanted to get our hands-on, but we couldn’t afford because we were in school and college etc. So, we bought similar things at a better price. With BSB I wanted to make products that were effective and really affordable for everyone to try,” she shares.

She also talks about being environmentally conscious with the packaging and says, “All our products come in glass packaging which is so hard to source in our country,” she says.

Being a boss babe – the entrepreneurial journey

When you begin an entrepreneurial journey, you must go all in knowing that there will be trials and tribulations that you’ll have to fight all the time, says Anusha, adding that she barely slept as she was in LA and her partner was in India making the time difference affect her night’s sleep.

“It took me a while to get used to it as I would finish my work, but my phone would just keep buzzing. Secondly, as an artist we have a team of people who make a shot happen but as an entrepreneur, despite having a team, I find myself in so many different roles so I’m learning all the aspects of the business,” she tells HerStory.

Gender inequality is evident in all spheres of life, especially in the professional realm.

Anusha shares that she faced a gender pay gap as an artist. “Doing the same hours and the same job with a male co-host and getting paid half the amount he was getting, finding out and being shattered. It doesn’t even make sense. That was really shattering when I used to find out about the gender pay gap and I had to find my way to make sure that it doesn’t happen again,” she says.

According to Anusha, during her entrepreneurial journey, she realised that her male partner would be taken more seriously and that she had to assert herself to be seen.

After collaborating with Pretty Secrets when her lingerie line sold out, a lot of people met her with similar proposals. One time she met someone to pitch an idea and after the meeting, the man said, “Oh so you’re not just a pretty face?”

“I told him that I am going to take that as a compliment and left the meeting,” she says.