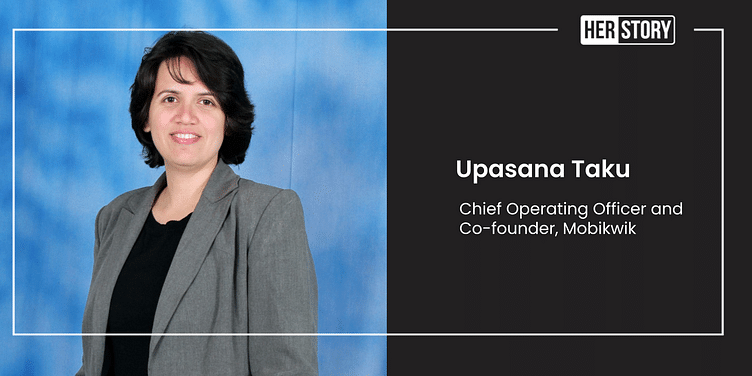 Fintech entrepreneur Upasana Taku talks about Mobikwik's journey so far, revenue as the company’s north star, and further opportunities in the market. On July 12 this year, the company filed its DRHP with SEBI to enter the public market.

The journeys of women entrepreneurs need to be talked about and amplified to inspire the younger generation of women in the country, says Upasana Taku, Chief Operating Officer and Co-founder of ﻿MobiKwik﻿ which entered the unicorn club last month.

As a high school student in Gujarat or even during her college days at National Institute of Technology in Jalandhar in the 1990s, Upasana had not read or heard much about entrepreneurship among women – although doyens like Kiran Mazumdar-Shaw had been building ﻿Biocon﻿since 1978.

Starting up was not on the cards for young Upasana who would have never taken the entrepreneurial plunge had she not pursued masters in management science and engineering at Stanford University in the US. Back then, entrepreneurship was not considered as glamorous as it is today, and especially so for Upasana who hails from a family of teachers and academics.

However, after scaling through the corporate ladder at HSBC and PayPal, she returned to India in 2009, hoping to spur convenient digital payments for Indians. She started Mobikwik in Gurugram along with her husband and co-founder Bipin Preet Singh, for whom starting up was an emotionally difficult decision because his first job at Intel helped the family overcome the financial stress caused by the 1984 anti-Sikh riots.

“He has worked at various companies designing chips, earning lakhs of rupees in salary, and there he goes to tell his parents about wanting to start up. His parents were against it and told him that business is risky and they could be back on the streets any day like they were 20 years ago,” she shares.

People from both their circles found it almost unruly for them to start up bootstrapped with their savings for four years till the first fresh funding of $5 million arrived in April 2014.

"And so, I need today's girls and young women to be able to read about these role models and their life stories so that they can get inspired and make it happen in their lives. Hearing their stories is going to encourage upcoming young women," she says, adding that the country’s GDP could benefit from women building companies in India, for India.

At the helm of Mobikwik’s growth

Upasana says the fintech startup has always been driven by tech and product innovation with as much simplicity and ease of use as possible – from launching the first mobile wallet platform in 2009 to the first Buy Now Pay Later offering three years ago.

The entrepreneur is clear about revenue being the startup’s key growth metric. In fact, its revenue grew by more than 100 percent for three years between FY17 and FY20.

Seeing today’s competitive fintech landscape in India, Upasana is clear that she built the company in the right way, and now, Mobikwik claims to be the most capital efficient internet company in India.

"We probably spend 100 million dollars and have 100 million users on our platform. I don't think many of our competitors can say the same, because they have used billions of dollars, but they don't have billions of users. We have been very focused on acquiring users in the right way from the daily life payment use cases,” she says.

Both Upasana and Bipin’s personal journey to starting up and knowing the risks involved has shaped the DNA of the company to be fierce and lean, and money is strictly spent for purposes like business expansion, growth, and hiring.

Most women in India looking ahead to gain skills to advance career: Survey

In India’s fintech market of $31 billion, Mobikwik shares the wallet payment market space with Paytm (also a unicorn) and claims to be a pioneer when it comes to BNPL.

"We are not concerned about the merchant apps, we are not concerned about the UPI-driven payment apps because the UPI ecosystem does not allow for credit to happen nor the distribution of financial products. We are therefore very focused on the wallet ecosystem where we acquire users and merchants and then enable them to do payments, be it pay now or pay later and in both cases, we make strong revenue,” she explains.

Upasana recalls a big fight with her parents just before she was leaving the US to start her business in India. She argued that while various services are existing in the US for payments, India lacked basic services at the time and that the market opportunity is huge.

She continues to believe in this vision and says, “The headroom for growth is extremely strong that I think I will be working as hard for the next 12 years as I have been for the past 12 years. And even then, it won't be enough to suffice the needs of the Indian market."

For entrepreneurs, she emphasises the need to build an ecosystem of advisors, supporters, or experts who one can tap into when one needs some honest advice.