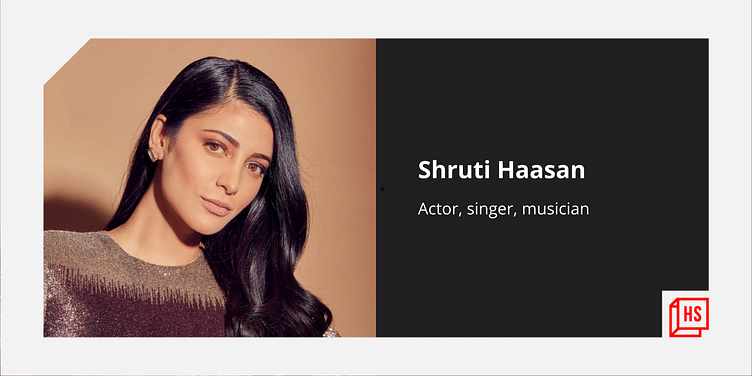 In a conversation with HerStory, Shruti Haasan talks about her journey through the worlds of music, acting, and self-discovery. She also tells us what led her to tie up with preloved apparel brand Dolce Vee.

Shruti Haasan is many things - actor, singer, musician, and the daughter of actors Kamal Haasan and Sarika.

Fame was always a constant for Shruti, but even as a young girl she often wondered about it.

“You don’t understand fame as a child. You just know that people think your parents are cool. But I would think, ‘why are people always asking and talking about my parents? What about me?’ It made me very determined to have my personality and narrative even as a child,” says Shruti Haasan in a conversation with HerStory.

It is this personality that Shruti wears with pride and panache.

Her voice can even be detected in her apparel, and she’s now chosen to make an impact by using her apparel.

Marking the Season of Giving, Shruti has tied up with the Dolce Vee, social enterprise SaltScout’s ‘pre-owned’ or ‘preloved’ fashion brand, to spread joy. She has picked out some of her favourite pieces from her wardrobe for an online charity sale, with proceeds supporting the Bal Asha Trust.

“Clothing is something personal, and an expression of who we are. And I wanted my clothing to have meaning,” she says.

“It's so important to keep finding new ways of giving that we can bring into our everyday lives. What I love about this initiative is that it has a huge positive environmental impact. When the pieces I've shared are bought preloved over newly manufactured, it would save over 7.8 lakh litres of water, and as much carbon as driving the average car for over 4,800 km! So, participating in circular fashion is a very real and accessible way in which each of us can give back,” she says.

Shruti feels that everything – fashion, acting, or music - has been an act of expressing what she feels and sees the world like.

She’s been seen in Hindi, Tamil, and Telugu movies like 7am Aarivu, Singham 3, and Welcome Back, but says her first love is music.

She was five when she had started singing for the likes of Illayaraja, and six when she performed live in Singapore in her father Kamal Haasan’s show.

“It made me dream big as a musician. I was on stage and there must’ve been like 80,000 people; it seemed unreal. I felt connected to all of them at the age of six and I felt a love that I still cannot articulate. I came off stage, and that started my musical journey.”

Trained in Hindustani classical music, Shruti also learnt music in the US. She teamed up with rock icon David Kushner, of renowned band Velvet Revolver, and was the first Indian musician who sang and wore lyrics alongside David.

“When I started out, it was singing playback; then I started getting into the rock and hard rock scene. Everyone was like: you have such a sweet voice, you are trained in Hindustani classical, and sing softly and sweetly.

“But I listen to Slipknot… the women singers I liked are Alanis Morissette and Tori Amos, and they had an awareness of their sense of difference and weirdness that was so impactful to me. As a child, it made me relate and think ‘that is how I can be, that is how I can sound’. I didn’t have to sound perfect like a movie song, I could be this other person. This didn't sit well with people in the beginning,” Shruti says.

After coming back to India, Shruti started a band, but acceptance of English music from an Indian singer didn't come easy.

“It is still a challenge with independent English music in India. The funny thing is: we are having this conversation in English, and we are happy to go and listen to Beyonce afterwards, but it seems hard to listen to Indians performing English music,” Shruti says.

The scene is changing now, but what kept Shruti going then was her love for music.

“I have always created music for myself first. The connection I have with my music is healing, spiritual, and feels a part of who I am. And then I need to share it. But I don't need to share my music as much as I need to make it…that is what kept me going,” Shruti says.

No longer the boss’ daughter

While music continues to be an integral part of Shruti’s life, she also liked acting. A movie set wasn’t new for her, but there was a difference this time - she wasn’t the boss’ daughter.

“When I went to my own movie sets, I had to do a good job and get along no matter what. I realised that this is really different. It took me a good five years to understand what  was going on. I was just hustling, figuring, and learning on the job. Only in the last four years have I enjoyed my own version of cinema and acting,” she says.

During the pandemic, Shruti worked in several short films and OTT series. She was seen in the short film Devi and Prime Video anthology Putham Pudhu Kaalai. She’ll soon be seen in Prime Video’s The Best Seller, in Salaar opposite Prabhas, and Netflix anthology Pitta Kathalu.

But she goes back to music, what it means to her, and how it differs from acting.

“Music gave me the courage to be different consistently and not worry about it. And, acting has taught me persistence of emotion, idea, and playing a character and staying true to it. In music, it isn't difficult to be persistently yourself, but an actor’s journey needs persistence. They are two different beasts,” she says.

“In music, being a misfit is a superpower; acting is about your expression and understanding of someone totally different. Music has given me the courage to stay weird and acting has given me the persistence to do it,” Shruti says.

Meet the millionaire CEO of Booking.com who bikes to work and is breaking the glass ceiling, one role at a time