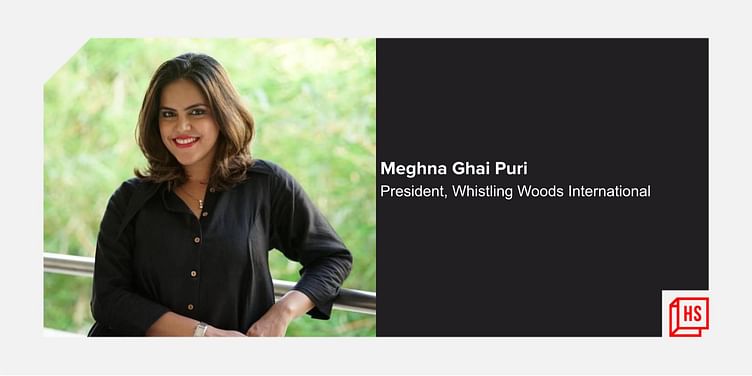 Under the leadership of Meghna Ghai Puri, Whistling Woods International has been ranked as one of the top film schools in the world. In this interview, she talks about how she made her father Subhash Ghai’s dream her own and worked to achieve it.

﻿Whistling Woods International﻿ may have been founded by acclaimed film director Subhash Ghai, but it was moulded into a world-class film school by his daughter, Meghna Ghai Puri.

“My father, a filmmaker but a teacher at heart, had always dreamt of building a world-class film school. It was a promise that he had made to himself when he started working in the industry. I was in the UK when my father asked me to come back and help him set up Whistling Woods International. It was in the ideation stage at that point in time.

“I returned to India to turn his dream into a reality because I knew how much this meant to him. And somewhere along the way, his dream became mine as well," Meghna says.

"Having experienced education systems in two different countries, I was able to take that knowledge to truly build an international Institute,” Meghna, who studied in India and the UK, tells HerStory.

Meghna started her career by working alongside her father at his production company, Mukta Arts, and then began working to set up Whistling Woods International. She started with a team of four, planning the institute’s infrastructure, curriculum design, and other departments.

“Over the course of five years, the board promoted me as the president of the institute. Though my father started this institute and has always mentored me, it was very important for me to find my own feet," she says.

Meghna has now led the institute for two decades, during which it has been ranked among the top 10 film schools in the world twice by Hollywood Reporter.

“I often call it my first baby. We laid the foundation stone for the campus in 2001 and it’s been a wonderful opportunity and experience ever since. There are unique challenges but we are determined to trailblaze our way to innovation,” says Meghna, adding that her priority has been to ensure that students are abreast with growing trends, including technological advancements.

“Yet another crucial initiative is to facilitate a balanced practical and theoretical knowledge, enabling our students to gain relevant expertise in the field they choose. Masterclasses and workshops are equally important, as we believe strongly that our students must learn from the leaders and game-changers of the industry. One of the cornerstones of the education at Whistling Woods International includes a high amount of student interactions with the industry.”

She has also worked out up to 100 percent scholarship of over $1 million to underprivileged students who have proven their mettle and deserve the education the film school imparts.

“We have vocational training courses to help and provide both, full-time career education and workshops for children from several NGOs. This initiative is equally essential for us as an institute and is very close to my heart,” Meghna shares.

Women in the spotlight

While the filmmaking process has been predominantly led by men, Meghna is of the view that over the years things have changed and gender lines are blurring in the entertainment industry. When the institution started its first batch in 2006, she says the number of female students was strikingly low.

“But, as the years went by, with constant awareness and industry evolution, we have witnessed a considerable increase in the number of female students enrolling for all our programmes, including the technical ones."

Meghna believes that there was a time when students used to shy away even at the mention of film and media education, but the present generation is focused and determined to follow their passion, irrespective of their gender.

“Some of our finest direction, cinematography, editing, and production students/alumni are women. And at the same time, I am happy to see some of our male students are creating a niche for themselves in the fashion and design industry, which was once predominantly a women-oriented industry,” Meghna signs off.

10 foods to help you tackle your period better