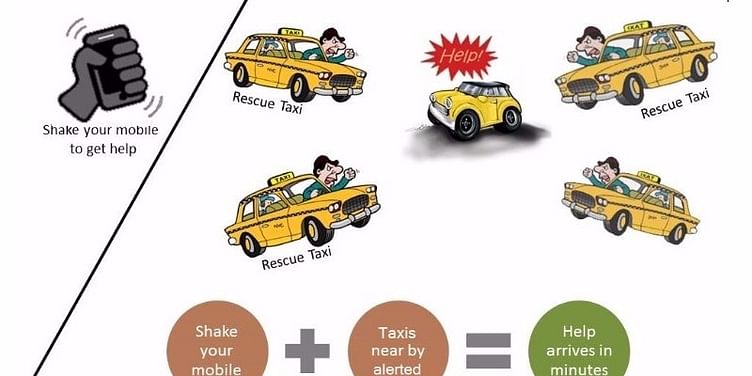 We often complain that if a pizza can arrive anyplace in 15 minutes & a taxi in minutes,why does help takes so long to arrive in an emergency?How mobile phones can cause disruptive effect in women security space,

We often complain that if a pizza can arrive anyplace in 15 minutes & a taxi in minutes,why does help takes so long to arrive in an emergency? 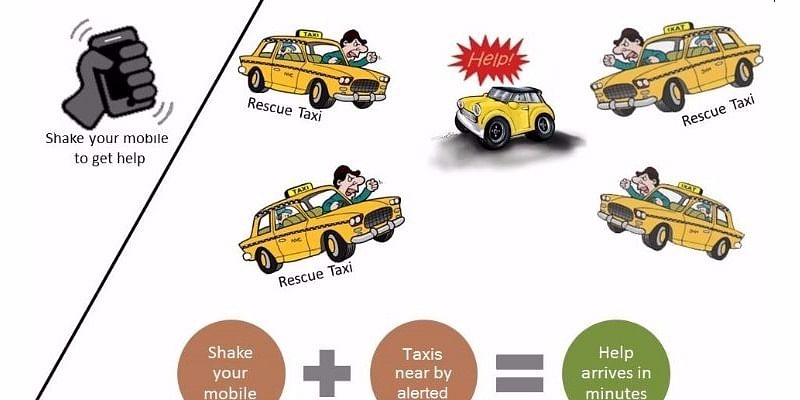 Shake your mobile to get help

Information – The taxi company knows when you are looking for a taxi –a critical piece of information to act on.

If these two points are handled for an emergency service, can help arrive in minutes?

Raise alarm: Let the emergency service know you need help and where – you might have 100 security personnel at your disposal, action cannot be taken without this critical information.

Delivery: Build a network, which can react to the alarm efficiently and effectively.

Think of a scenario where the entire police network, friends of police, ex-servicemen etc are all interconnected with mobile devices (similar to how 1000's of taxis are connected using an app) and this network gets used to prevent crimes rather than investigate them at a later stage.

Let’s take a look at women safety in app-based taxis to explain this point.

When app based taxi services came to Indian cities, their one big draw was the sense of safety a closed and online trackable taxi can provide to the commuter. While taxi services have become popular and women make a big chunk of their users in cities, there have been instances of drivers indulging in misbehaviour, forceful entry, wrong route taking and assault.

You will agree that a fast, foolproof and workable crime prevention solution would be great, a solution that stops the taxi driver from committing a crime out of the fear that:

An alarm will be raised .

Help for the victim will arrive in minutes and the aggressor will be caught and punished.

Way better idea, isn’t it? To be able to raise alarm in seconds and get help in minutes with a simple solution to implement.

Here is how this works:

1) A woman is commuting in a taxi that has been called using a taxi service app on her smartphone.

2) On facing unwanted behaviour from the taxi driver; she simply gives her phone a violent shake or drops it deliberately, or if the phone falls down during a scuffle, an alert is raised in the control room immediately. Point to be noted: Here there is no need to hunt for a panic button. In an emergency, how can one expect the person to unlock her phone, open the app and press the panic button!.

3) The control room receives distress notification along with phone location GPS. It immediately calls back the woman to verify the alarm cause.

4) As soon as the need for help is verified (no reply is also taken to be a distress situation), the control room instructs all nearby taxis to rush towards the woman’s last known location.

5) Help arrives in a matter of seconds and minutes and the woman commuter is rescued.

The rescuing driver reaching first on the spot gets a reward. 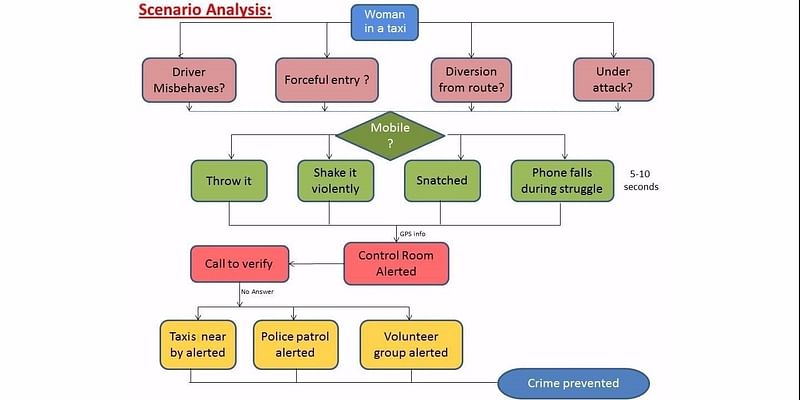 Thinking if the police patrol can be notified, why notify taxis as well? The answer is simple.

The number of police patrol cars on roads is limited. The number of app based taxis on roads is much larger. So while a patrol car may take 20 minutes to arrive (late enough for a crime to have taken place), nearby taxis will reach the crime site much faster and hopefully before any serious incident can take place.

For example, Delhi has an area of approximately 1500 sq km. The number of police patrol cars is around 500 which makes it just 1 patrol car per 3 sq km. On the other hand, Delhi has about 8 taxis per square km and the number is rising. Taxis are available 24hrs. Do the simple math and you will see that help will arrive much faster by getting fellow cabbies to arrive.

Once the attacker sees the rescue cabs, he is likely to leave the victim alone and try to make an escape. Just the arrival of rescue taxis should be enough to prevent a crime.

What if the rescuer taxi driver becomes an aggressor too?

Well, a crime usually happens when the assailant knows he can escape without getting caught. Here if rescue taxi drivers’ presence and location are known , the chances of them joining the crime are very low. Last but not the least; a hefty reward for the first rescuer is also a huge motivation to stay on the right side of the law.

What if a phone gets switched off on dropping, how would it send an alert?

Well, a phone can detect a fast movement and send a panic SMS in milliseconds before it reaches the floor.

What if someone drops a phone by mistake?

Well, a call back from the control room can verify the event and act as needed.

What if someone plays a prank?

Well, one way to handle is to levy a penalty for raising a false alarm.

Of course, organised crime with every step carefully thought through might be tougher to prevent but at least spur of the moment crime can be stopped.

The effectiveness of this solution is linked to how well it is brought in. Its scope can be widened by including ex-servicemen, friends of police and volunteer groups who can respond to the alarm call making response time even shorter. Going beyond safety in taxis, this solution can also be extended to other emergency situations.

This is a classic case of how mobile phones – instead of just being an access device to call a emergency helpline – can actually be used for crime prevention. Building an effective network of friends of police and ex-servicemen will put a watchman in every nook and corner of the country. Best of all, they will all be connected in real time.

Think differently, a system like this should be very effective in overall crime prevention.

What do you think? Tell us your thoughts and ideas.