Why we are far away from achieving gender equality 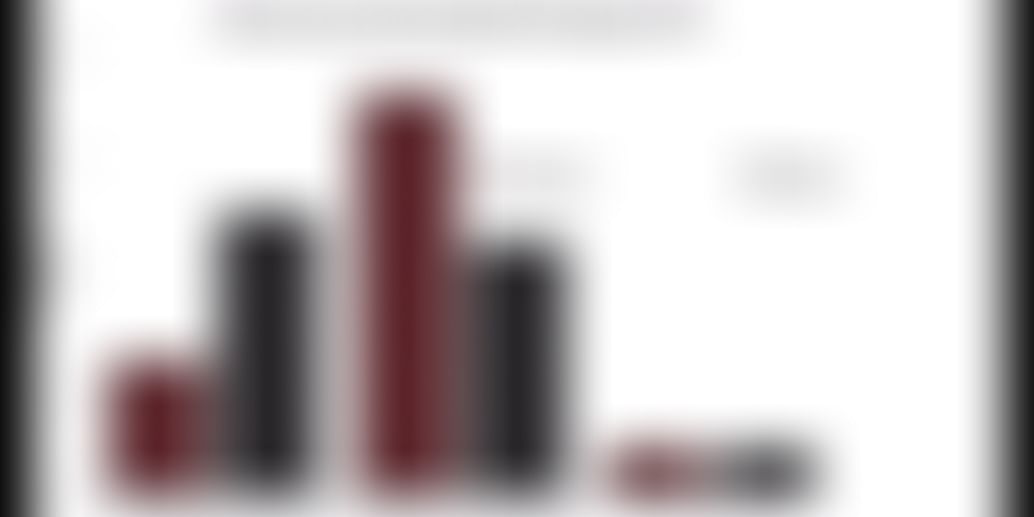 This article answers the question  "Why we are far away from achieving gender equality?" and shares the results from the research done on the difference in thinking between girls and boys when they were asked about work, leadership and parenting at a young age.

We all talk about gender equality, feminism, fighting for justice, freedom etc. and we all; both men and women, want a future without discrimination on the basis of gender. We all strive to live in a world where human rights are accepted by society and in which there is respect for both. Yet, we generally forget that our actions speak louder than words and to bring a change, we need to act in that certain way, instead of only speaking about it.

But more than that, what really matters is our attitude and thinking about equality. Perception shapes our reality and influences our behaviour and that is why we are far away from achieving gender equality, even though we have been aiming for equality for so long.

Inspired from the book “Lean In” by Sheryl Sandberg; COO of Facebook, where she talks about women, work and the will to lead, a research was conducted to find out the difference in thinking between girls and boys on the basis of work, leadership and parenting at a young age. The research was conducted on 156 Indian students (78 males and 78 females) from northern India of age 18-21 years. 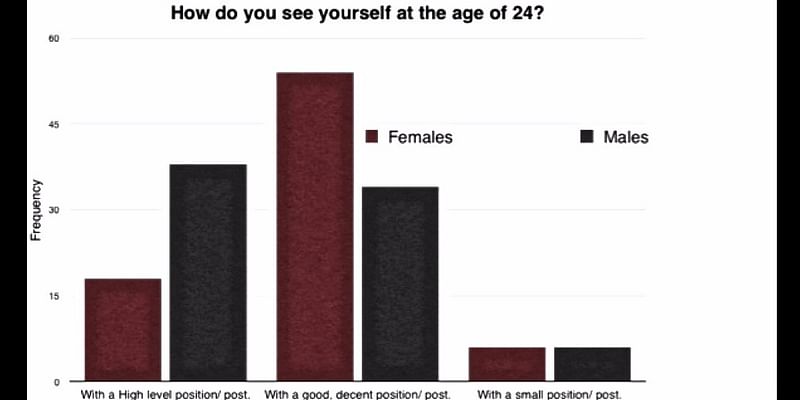 When asking about “How do you see yourself at the age of 24?”, more females chose “With a good, decent position/ post” than males, whereas more males chose “With a High-level position/ post” than females when it came to work. This result has also been found in various studies around the world and is also shared in the book “Lean in”; that men usually aimed to achieve a higher position, in comparison with women. Even if males weren’t capable of gaining a higher position, they still thought so. And even though females were capable of achieving a high position, they still did not believe in it.

Various studies have shown us that females have outperformed males in education, work and other aspects. Therefore, it is time that they need to believe in themselves and their capabilities. Both the “gender inequality” in top level management in companies and the problem of “why we have too few women leaders” can be improved when women start believing that they can achieve and win and teach their friends and daughters the same and help them towards a leading position. 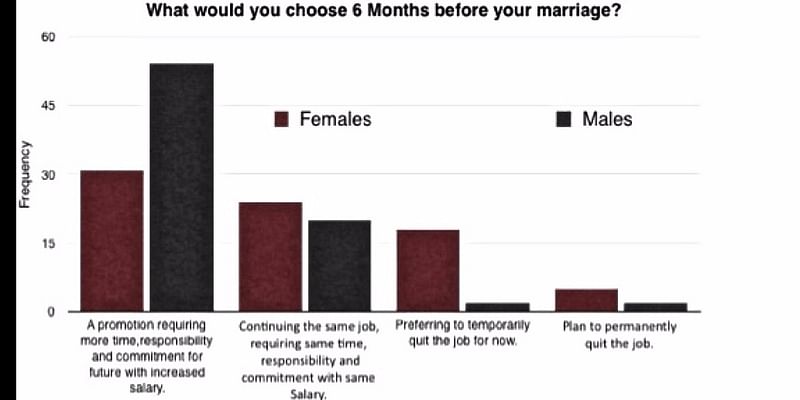 The next question was related to a situation in which they had to make a decision. 6 months before marriage and still the mindset and choices of both males and females differed even when they are just 18-21 years old and studying. The bar graph shows that again fewer females chose a promotion with high salary that required more time, responsibility and commitment for future than males when marriage was concerned. They even preferred to temporarily and permanently quit the job not considering the opportunity.

As Sandberg says, “Don’t leave before you leave” stating that most women start planning for future, family and marriage too early during their careers and that they start sacrificing the current opportunities i.e. They leave before they actually leave and this ultimately leads to the fact that males stay dominant in the workforce. This is one of the reasons why the companies prefer them for top positions, which leads to gender inequality in the workforce and the problem of why we have too few leading women. 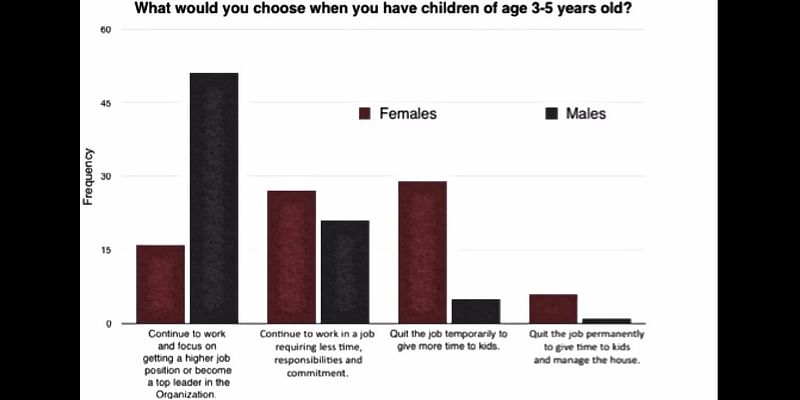 A lot of things change when we have children and by looking at the chart above, it clearly shows that more males continue to work and focus on getting a higher job position or become a top leader in order to support the family financially. Many ladies either choose work that requires fewer hours and responsibilities or quit the job temporarily or even permanently to spend more time with the kids; focusing on their learning and development. People say that women can manage and take care of the house better. This believe is shared by a great percentage of the population, but is it true?

Studies have shown that females who work really hard help the family support financially. This becomes even stronger when both the parents work hard. Just like men, ladies should follow their dreams and work hard to achieve their goals. And just like the ladies, men should also stay home some part of the week, to take care of the children and contribute to the housework, because when we talk about equality, all the work should be done 50/50 right?

Studies show that in the families where the father contributes at home, it gives a positive impact on the child’s life and learning development. What really makes a child successful in life, are both of its parents contributing to its learning, education and development, which also leads to a happy married life. Again, when we talk about equality then even males should be given a fair chance to take care of the child i.e., even if they don’t know how to change a diaper, they should not be interrupted or made fun by their better halves, but encouraged to try again.

Sheryl shared stories and experiences like ‘the need for a mutual understanding between the partners’ in her book. So next time, you might want to consider dating or marrying a man/woman who is a feminist. Because this has not only an impact on your professional career but also on the way your children will develop and experience their lives. 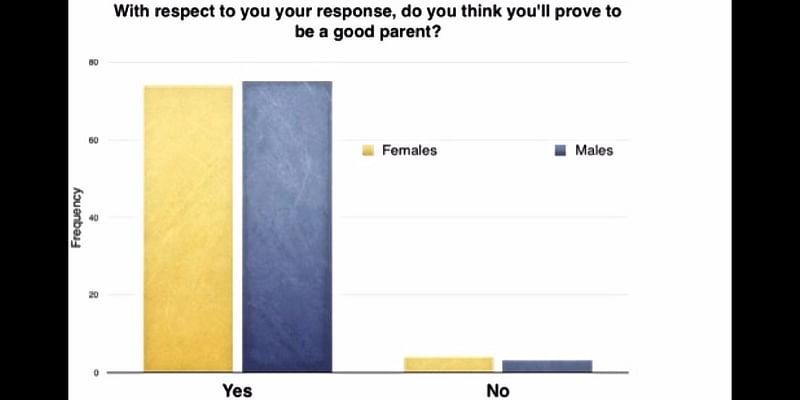 In the last question, the young students answer the question of whether they’ll prove to be a good parent according to their response above, interestingly, both of them have a similar response i.e. “Yes, they’ll prove to be a good parent”. In fact more males think that they will do a good job of parenting, compared to the females. Is that fair, looking at how much time each gender spends with their offspring?

As mentioned in the beginning; our perception shapes our reality that influences our behaviour, it is important for the young generation of the age of 18-21 to understand and change their thinking and attitude right from this age, right now.

Our thinking and attitude will shape our behaviour towards work, leadership and how we behave with the person of opposite sex. Our thinking has influenced our beliefs that ‘men are performing better professionally’ and ‘women are better at running the household’, which has become our reality.

Therefore, gender equality is impossible to achieve and that is what we will pass on to our future generation.

Until We Change Our Thinking, Right Now.

To achieve gender equality, we need to force ourselves to think what is right and change our mindset about what men and women are better at. Both males and females are great professionally, as well as running the household. They might just need a little development in order to become a master in leading or managing the household, but their better halves should be there to support them.

(Sheryl Sandberg, COO of Facebook, who is truly an inspiration not only to women, but also men, is working hard to spread the word about gender equality and has created the ideas, concepts and suggestions. “Gender Equality can be achieved only when we have equal female leaders at the top” - Sheryl Sandberg)

"Change the perception and we will achieve gender equality"