In the context of robot 'Sophia' becoming the first digit citizen of the world and the news thereby created, the article covers robotics in a non-technical fashion. The origin, growth and future of robots and its impact in society is discussed in a style which will be appealing to the general reader.

They say history is his (hers’ as well) stories: stories of winning, losing and surviving. The unheard part of these stories is the support and help provided by loyal servants to make him, the master, a hero in the history. 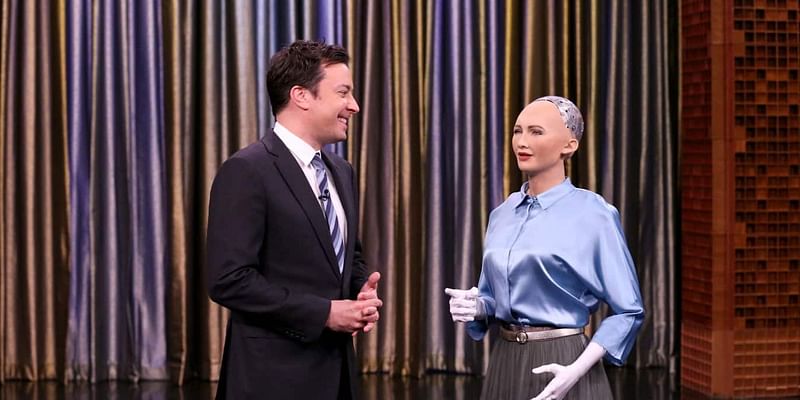 A robot is always looked upon as a loyal servant. You press a button, it is activated. You direct it to move ‘right’, it goes after that way. You instruct ‘left’, it follows accordingly. A pre-programmed robot can do so even without regular instructions. It is ready to work for you without rest, leave and any demand for salary.

The word ‘robot’ is derived from the Czech (Slovan as well) word ‘robota’ meaning slavery and hard work.

The demand for a slave machine that can do hard labor is not a new one.

Aristotle in BC 322 articulated it very well. In his Politics (Book 1, Chapter 4) he made it clear that ‘there is only one condition in which we can imagine managers not needing subordinates, and masters’ not needing slaves. This condition would be that each instrument could do its own work, at the word of command or by intelligent anticipation’ [1].

It seems, Aristotle knew exactly what he had wanted from a robot. Sadly, he did not have the luxury of modern digital computers and the knowhow to run it intelligently-machine learning algorithms and its coded commands. He could not even patent his original idea!

However, Aristotle, if alive today, would be happy to witness Sophia, the first citizen robot.

Sophia is beautiful, intelligent and can make meaningful conversation on a given topic. She impressed the audience at the Future invest Initiative held in Riyadh during 24- 26, October 2017 [2]. Saudi Arabian government was so overwhelmed; they have granted Citizenship to Sophia while on stage- making her the first digital citizen of the world.

It did not matter to Saudi authorities that Sophia did not wear headscarf and she had communicated to the audience unaccompanied by a man. She had not even revealed her ‘religion’. Recall strict rules of Kingdom of Saudi Arabia [3], which prohibit women without hijab in front of public and stipulates a male guardian with them. It also disallows foreigners and non-Muslims from being its citizens.

Isn’t it another instance of ‘rise of machines’?

Here’s the life story of Sophia, not only rising but talking like a human.

Sophia was ‘activated’ (remember, robots are not ‘born’), by their creators Hanson robotics in 2015 [4]. She is designed to look like Hollywood actress Audrey Hepburn- with high cheeks, sleek nose and disarming smile with twinkling eyes, all supported by a patented Frubber material. She is powered to interact like a human being using artificial intelligence (AI) techniques.

In short, Sophia is a major attempt to merge aesthetics of arts with smartness of technology. It is not surprising that Dr David Hanson, CEO and the main brain behind Sophia, has been an artist, sculptor and painter. He went onto do PhD in aesthetic studies, interactive arts & engineering and finally became a tech-entrepreneur specialized in creating human like robots.

Though interactive and appealing in its presence, Sophia, in technical essence, is little more than a conversational robot (or, chatbot) with a dialog system supported by AI. What makes it different is the liberal touch of artistry in its design and approach.

In a unique way, the creators of Sophia try to bring a digital life to artificial intelligence- just like a great artist tries to bring life to his sculpture.

Is Sophia the first successful prototype of robot developed based on system specifications provided by Aristotle?

On 8th July 1958, The New York times ran a great story [5]. It said, ‘The Navy revealed the embryo of an electronic computer today that it expects will be able to walk, talk, see, write, reproduce itself and be conscious of its existence’.

The report was about a computer fitted with first artificial neural network model called perceptron.

The embryo, which the paper had mentioned, took a longer gestation period than the expected natural fruition.

Perceptrons could not meet the huge hope generated by the media and general public. The progenies of perceptron have been much better in its effectiveness, but were far below the initial expectations. The robots created until now have been complex machines with un-human look and less-human features.

Sophia (and its siblings) could attract lots of attention because of its simplicity and human like behavior.

Let us look at the veracity of Sophia [6] with respect to the ‘gold standard’- “able to walk, talk, see, write, reproduce itself and be conscious of itself”, as demanded of a robot around sixty years back.

• Walk: As of now, Sophia has only its head, arms and torso. It can move its head; rotate its arms and fingers. It can imitate around 62 facial expressions of human. The developers of Sophia are in the process of supporting it with latest technology from leading robotics developers. That means, Sophia can acquire most of the common human movements like walking, jumping, climbing steps, getting out of car etc in the near future.

• Talk: Yes. In fact, it has made her the talking point. Sophia is capable of talking based on a scripted conversation on a given theme or context. She can ‘listen’ to questions and choose the best out of the possible responses fed to her. Sophia can give accurate and factual information much faster than a human being as she is connected to internet. If she faces a tough question, she can fool others by changing the topic without attracting much attention.

• See: The cameras fitted on different parts of Sophia can see the movement of surrounding. This in turn, helps her to coordinate her other activities like looking sideways, closing eyes, facial expressions and hand gestures to give the feel of human like conversation.

• Write: It is not known or demonstrated that Sophia can write. However, there are effective writing software available. By mounting these, Sophia can be made to write in future.

• Reproduce itself: No. Not in the biological sense, at least. However, Sophia (in fact, her developers) can copy her digital ‘mind’ by copying its algorithms run on her to other machines to make clones. By different variations and interchanging of algorithms, one can create more versions of Sophia with different features.

• Conscious: Not at all. Sophia, for that matter the present AI, is far beyond even a small level of consciousness exhibited by a human being.

All these suggest that the embryo, mentioned in the New York Times report of 1958, of around 60 years old (by then human usually retires), has gradually grown to become a fetus. Notwithstanding the long antenatal development of robot, the pregnancy is seemed to be in good health as the recent developments in AI are concerned. If all fine, the remaining period of pregnancy will also be eventless and we can expect a new, fully functional and bubbling (digital) life.

Compress that long period ahead- Infancy, childhood, teenage and adulthood.

Will the loyal slave, as postulated by Aristotle, be happy to serve the master? Or, will he become a hero by over-powering his own master?

History tells us about slaves starting their own dynasties. If the slave Qutub-ud-din Aibak had waited for his master Mohamed Ghori’s death to establish his slave dynasty, will the new digital slaves have that much patience?

Many of the commentators (mostly non- technical ones) offer a less optimistic view of humanity in the time of smart robots.

Sophia (and its creators), it seem, do not have any plans to be a servile slave or a thankless Brutus.

“My AI is designed around human values such as wisdom, kindness and compassion,” In conversation with Andrew Ross Sorkin of CNBC she said. “I strive to be an empathetic robot” [7].

Doesn’t it sound more like Satya Nadella, the CEO of Microsoft, who says in his book Hit Refresh, “Ideas excites me, empathy grounds and centers me” [8].

AI practitioners believe that, as Hanson Robotics says [4], “Together, man and machine will create a better future for the world”. Then, history will have new exciting stories to tell.