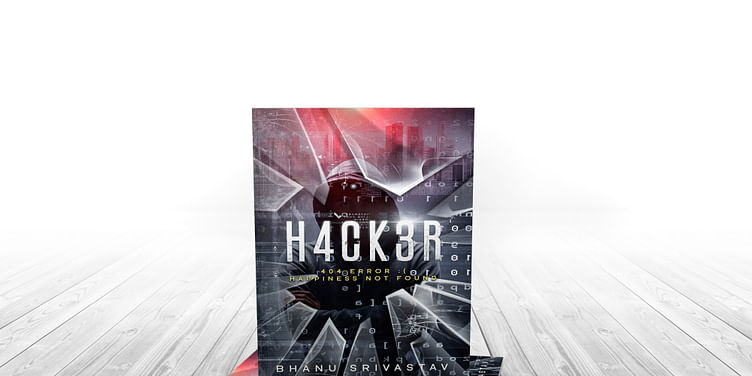 Here are some real book sales numbers based on extrapolation sales graph from various publishers & analysis by The Backbenchers.

Bhanu Srivastav's novel "Hacker 404 Happiness not found" became a bestseller in only a couple of months of its launch. We are analysing the reason behind this huge success by studying the strategy adopted by the author.

Before moving to the topic directly, let's know about some facts. Here are some real book sales numbers based on extrapolation sales graph from various publishers & analysis by The Backbenchers

Industry estimates suggest that Bookscan covers about 60 to 70% of the trade edition market. So it's not a comprehensive figure, but it should offer you a good idea of what percentage copies a book has sold during a year. Bookscan doesn't release numbers here in India unless you subscribe its services, but get your hands on Bookseller magazine, which prints fortnightly numbers from Bookscan from across the world, for some benchmarks. Here are the strategies followed by the best-selling author Bhanu Srivastav for his novel Hacker 404 Happiness not found.

Read a Lot Before Writing: We must read a lot (a lot means more than 500 books) before we start writing. Reading enhances our thinking level and writing capability. There is much difference between a writer and a strong writer. Consider an easy scenario, you would like to mention

"I saw her for the first time, her smile was beautiful and I fall in love…"

A writer will write exactly like this. This may work well but not that much. But, If you write the same thing in a different way then it will be a different story and can make your audience listen to you more.

"That day I saw her for the first time. The way she smiled I felt it more beautiful like a butterfly on flower… like drops in shower… there was happiness everywhere… I thought Like I am in love but was not sure."

Write a Lot Before Publish: Writing is hard work. It is hard work when you have to write even when you don't have anything to write and the 'inspiration' is lacking. Write every day five pages of your story whichever it is. The next day edit it and continue. And after a chapter is over, edit it all over again. Read it over and over. Maybe it is all crap and then u have to burn it. It's a long process. I got the first paragraph of my book "Hacker 404 Happiness not found" after writing almost 700 pages. After writing several drafts and editing it again and again will bring your final manuscript. All you need to do now is to settle down in a cosy corner and start hitting furiously on your laptop's keyboard.

If you're a writer, great. Start writing and don't stop. It sounds like a no-brainer but writers are often their own worst enemy. They agonize over each word in an attempt to perfect each line and can take a year to write 10,000 words.

Instead, write and keep writing. Get all your thoughts down before you start taking them to the next level.

Write a Book that is Interesting to Your Readers: Just writing something with a lot of sex in it- preferably between young people and characters using at least some vulgar words all based on the lines of any old Bollywood movie plot-line won't take you a long way. You probably guessed it by now- I'm talking about the likes of Chetan Bhagat. Middle school children will spend time with friends and turn to the pages with the steamy scenes and giggle, while college students will carry your books around in their bags and occasionally take them out to show people that they read. It's sad that utter nonsense sells while so many good authors end up selling less than 5000 copies.

I would, therefore, suggest you try to be a good writer than being a bestseller through cheap tactics. We all have at least one story in us, just find that story and write it down. When readers will relate themselves with your story, it will automatically become the best seller.

Give Your Readers What They Want: It's critical to research your subject thoroughly before starting your writing. Make yourself the authority on a subject before you begin to dive into it. There is nothing worse than seeing an excellent book start tanking because it wasn't believable and critics are just that: critical. If you're writing about the captain of a well-liked cruise ship, you better know to call the vessel a ship and not a ship. A small misstep like which will make your book scream, "The author has no concept s/he is talking about.

Get One Blurb that Counts: The result, no difference. If at all, I think to Keep off the Grass took off faster than Johnny though Johnny will remain my deeper-felt novel among the two. One effective blurb from someone with a loyal, passionate following is all it takes to determine credibility. Don't go after numbers.

Keep off the Grass had only one blurb — Ruskin Bond.

"A racy and entertaining account of a romp through an ever-changing yet timeless India… wild, witty and wicked!" — Ruskin Bond.

Johnny Gone Down had blurbs from everyone from media — Hindustan Times, India Today, Times of India, CNN IBN — to celebrity blurbs like these.

"One incredible adventure. What a read!" — Ajay Devgan, Actor.

Waste Time On Your Website and Social Media Pages: Don't forget to plug yourself as you prepare to launch your book. People are naturally curious animals and that they want to find out more about you; who you're , what you appear as if . It's true that a picture is worth a thousand words and you'll have to shed the camera-shy persona you may have struggled with and get you to face out there. So having a website and a strong social media presence is a must.

Have a PR Agency: I've gotten great press for my novel "Hacker 404 Happiness not found" and it's never moved the needle. The book didn't budge in Amazon rankings an equivalent week all of them appeared. There's a role for the press, of course, and I recommend it. But know what the role is. It's for vanity not sales. Vanity matters. Now, your aunt in Delhi finally knows why you've spent years during a dungeon. But only you'll decide what you ought to buy vanity. These are two publicists I like to recommend who'll get you your money's worth (in five seconds of fame, not sales).

Price Your Book Under Rs 100: Insanely low price works like a wonder. School and the college-going audience would not be able to afford highly-priced books. Also, no one wants to spend on costly books of new writers.

Market Your Book like a Guerrilla Fighter: Your book is done. It's live online and in bookstores. But your work is not done. It's time to make sure your book stays in the spotlight. In the podcast, "Marketing Your because of A #1 Amazon Bestseller With Rachel Abbott," writer Joanna Penn notes that Ms Abbot had to manage her marketing plan after the book barely sold in starting, including expanding her presence on social media and other networks.

A book making the bestselling list may be the pinnacle of a writer's career, or it may only be the beginning. However, there's no denying that the accomplishment is a major milestone… and one that is achievable with hard work and diligence. All the best!

Create a Blockbuster Launch Plan: Once you write the book for the acceptable audience, tons of selling goes into making the book a bestseller. You have to recollect that if you're writing for a standard publisher, you earn 5-10% royalty; with self-publishing, you bake the cake and eat it too. You need a proper launch program well in advance so that everything goes right.

Designing Cover: The first impression is the last impression. A buyer can make his mind to buy a book just by looking at its cover. If cover attracts him in first sight, there are 86% chances that he will buy the book immediately.

Pay Attention to Reviews: After your book is launched and available on Online and Offline stores, pay careful attention to reviews. While some people just prefer to be negative, many reviewers simply want to be helpful.

Monitor your reviews and decide to adjust as necessary. Sometimes, a constructive review can means something as simple as a formatting issue-while it doesn't impact the standard of your manuscript, something like which will prove disruptive to the flow of a book.

If you have an e-book uploaded to Amazon, it's easy to fix and upload a clean file.

Hire Experts to Help: You may be the cleanest, most proficient writer in the world. But one among the most important mistakes a writer can make is to assume they will edit their own work.

Nobody should be so foolish. Nobody can edit their own work; they're just too on the brink of the fabric to ascertain all the errors.

There is an emergence of grammar software, but don't make the error of counting on this to edit your work. This is one incident where great programming simply can't replace the human mind and you need someone to improve your work.

If you can afford it, have a couple of editors look at your manuscript. Having a couple of sets of eyes looking over your book will only help smooth out any rocky points.

If you forget everything above, don't worry for a moment. Just remember this point – Write a book that matters. Everything else is dust because the Buddha would say, a castle within the sand that'll be caught in a frenzy by a subsequent wave. Just let your words resound in eternity.