The Rise of India as a Digital Superpower

India’s growth as an economic superpower and the fastest growing economy in the world is not speculation anymore. This boom has been driven in major part thanks to the rise of internet and digital technology in India’s hitherto ignored Tier II and III cities.

According to the IBEF Report, India is the biggest e-commerce player in the world. The market shows no sign of saturation in the coming few years. Talk to anyone from Myntra to Make My Trip, from Ola to Swiggy, everyone is betting big on India’s Tier II and III Cities.

Cisco’s 13th Annual VNI (Visual Networking Index) Report states that the number of smartphone users in India will rise to 830 million by 2022. This is over 60% of the population. In addition to smartphones, the internet revolution is sweeping through India’s hinterlands.

The competitive price wars between major telecom providers like Reliance Jio, Airtel and Voadafone have witnessed an unprecedented drop in telecom and data charges across the country. This increase in accessibility aided by rising incomes and ‘glocal’ aspirations have transformed India.

The penetration of social media, especially Facebook has made the previously closed Indian consumer open up to global tastes and aspirations. They want to shop the latest trends, eat the choicest food, ride comfortably in cab hailing services, and travel to exotic destinations for holidays.

What you can expect of a consumer in Bangalore and Mumbai is similar to someone residing in Bhubaneswar or Surat. This has opened up avenues for local digital targeting of consumers. Subsequently, we see the rise of digital marketing companies in India’s Tier II and III cities.

What Services do Digital Marketing Companies Offer in Tier II and III Cities?

With the growth in the number of digital consumers in Tier II and III cities, digital marketing companies have also mushroomed. If you look at cities like Gurgaon, Mumbai, Bangalore, Noida, Hyderabad, the market for digital companies has saturated.

From Google AdWords Campaign to Facebook Advertising, from website development to content marketing, digital companies are offering the entire repertoire of digital services to consumers and brands in these cities.

The growth in social media penetration means that brands in Tier II and III cities are actively looking for social media marketing. From creating posts on Facebook and Instagram, to helping brands set up their e-commerce store, digital companies are generating great revenues.

One of the biggest services that digital companies are providing in the smaller cities is helping small manufacturers set up their brand page and store on Amazon and Flipkart. Yes, there are other e-commerce players in the market. However, these two are the biggest ones.

The digital information technology revolution means that high-speed internet is present in Tier II and III cities. The presence of skilled employees is also there. In Tier I cities the cost of living is incredibly high, so salaries are also quite high.

In Tier II and III cities, the cost of living is low, hence salary wise it makes much more sense to set up a skilled team at an affordable cost.

The increasing market and the inability of the big agencies to migrate to smaller towns and cities have opened up a host of opportunities. Given the demand for digital marketing companies in these cities, opening up a digital company has been the preferred option for many entrepreneurs.

When you look at the levels of competition amongst brands and digital agencies in Tier I cities and compare the same to Tier II and III cities, there is a sea of difference. However, this also means that the first mover’s advantage is crucial. Brands who have been able to take advantage of this have been reaping the rewards handsomely.

The Challenges of Digital in Tier II and III Cities

The biggest challenge of spreading digital as a service in such cities is convincing brands. As the impact has just been felt, brands are sceptical of approaching the digital landscape. For digital companies, the challenge is educating smaller brands and introducing them to the benefits of digital marketing.

The ‘money challenge’ is also there. A standard creative agency in Gurgaon might charge an upwards of INR 75000 for just social media postings on three platforms. This rate drops to lesser than 1/3rd when it comes to Tier II or III cities,

For digital marketing companies to be successful they need to deal in volumes. This is something that traditionally the creative/digital business was not set up to do. However, in India, the entrepreneurial and enterprising nature of individuals ensures that some middle ground can be found.

According to experts and analysts, the digital landscape in India will increase in the next couple of years. This not only presents a host of opportunities, but also a fair share of challenges. For digital marketing companies, the next step is to create and invest in product innovations, tools and automation.

Saas (Software As A Service) is being increasingly popular in Tier I cities, with many digital entrepreneurs setting up their own SaaS companies. The same needs to be carried forward to Tier II and III cities.

Entrepreneurs need to be aware of the fact that the digital is a highly dynamic and evolving field. What is relevant today is obsolete tomorrow. The need of the hour is to keep improving and innovating. If brands in Tier I cities have started looking at SaaS platforms, we can expect the same to happen in Tier II and III cities in the next couple of years. (It might even be happening as we speak).

India is no longer defined by its Top 8 cities. There is a world beyond the Metros, and digital companies and brands are actively exploring it. 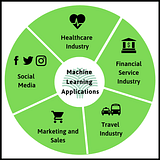 8 Industries Making the Most of Machine Learning Applications

3 tried and tested steps to become a successful Blogger