Top Things to Do in Diverse India 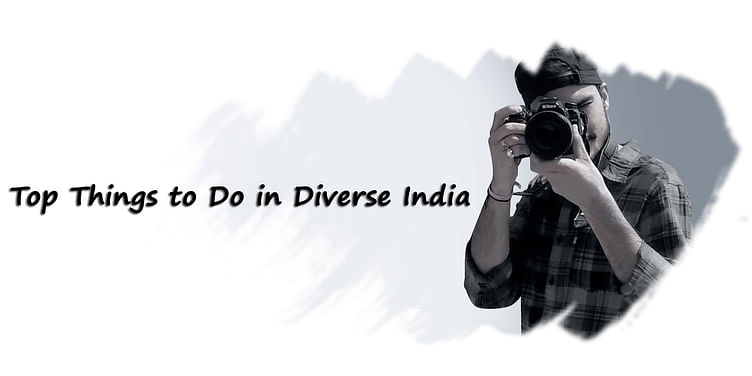 Some of the most popular adventure travel destinations in India include northeast India for tribes to visit, wildlife to spot, peaks to climb, caving, trekking, and jungle.

India is a land of diverse landscape, culture, language and food. The country is full of amazing places such as beaches, mountains, deserts, palaces, forests, temples and forts.

A visit to India will open a whole new world in front of you, as this land is the most ancient civilisation in the world.

The wildlife of India is also extremely diverse and the wildlife sanctuaries and national parks are home to thousands of animal species, including the most endangered species like the Royal Bengal Tiger and One-horned Rhinoceros.

The Indian festivals are the best way to understand the diversity of Indian culture as people from all walks of life come together to celebrate them.

The most famous festivals of India are Diwali, Holi, Durga Puja, Ganesh Chaturthi, Chhath, Rath Yatra, Onam and Pongal. If you are coming to India, then you must take part in these festivals to witness the colourful and amazing culture of this country.

Most of the tourists who visit India, limit their trips only to the major cities while to capture the real India, you have to visit the villages of India as the soul of this great country lies in its villages.

The best way to explore the countryside and meet new people during your trip is to do your journey in India by road. There are many car rental companies and taxi services that provide car renting services at a cheap price.

Try to be adventurous –

India has a diverse landscape which includes mountains, deserts, forests and beaches, which makes adventure travel a popular option for the tourists.

If you are visiting the Himalayan region, then you can opt for paragliding, heli-skiing, trekking, hot air ballooning and rafting, while you can go for hiking in the state of Uttarakhand, one of the most scenic places in India.

Travel in a houseboat –

The southern state of Kerala is one of the most beautiful places on this planet and offers excellent houseboat trips, during which you will experience the lush green forests, wild animals, birds and villages that are present along the backwaters.

Kashmir is known as ‘heaven on earth’ and a trip on the boats in the Dal Lake will let you witness the heaven from your own eyes.

Visit the historical monuments of India –

India’s cultural diversity is best reflected in its historical monuments. Your visit to India will remain incomplete without a visit to these monuments which portray the rich cultural heritage of this country.

Enjoy at an Amusement Park –

India has numerous amusement and theme parks, the most famous of them being Wonderla Bangalore, Nicco Park Kolkata and Ramoji Film City in Hyderabad.

Indian civilisation is the oldest in the world and its temples are the reflection of the thousands of years old culture which is still living and flourishing.

Take a trip to Rajasthan to witness the grand palaces –

Rajasthan is home to numerous palaces and forts, whose architectural beauty amazes everyone and narrate the glorious past of the country.

These palaces were built by the Rajput kings who used to rule over those parts of India hundreds of years ago.

Indian beaches have been a major tourist destination for people coming from all over the planet. Some of the beaches remain a bit crowded and are a perfect destination for parties, like Goa but there are beaches in other parts of the country which are serene and are the best place to relax.

Visit the temple town of Varanasi –

Varanasi remains one of the major religious and spiritual places associated with the Indian culture.

You should try to spend some time at the Ganga ghat in the morning during sunrise and in the evening during aarti to witness the spirituality of India.

You must bring an extra bag with you when you plan to come to India, as it is impossible for anyone to leave India without buying anything from the Indian bazaars. Indian bazaars are full of beautiful handicraft items, ranging from jewellery to textiles and it will be impossible for you to resist yourself from buying those.

Indians are very friendly and open-minded people, so try to engage in conversations with them as Indians love to interact with everyone and they can usually speak on any given topic for hours. Having an interaction with the locals will make you feel like a part of this country which is home to an ancient culture and rich heritage.