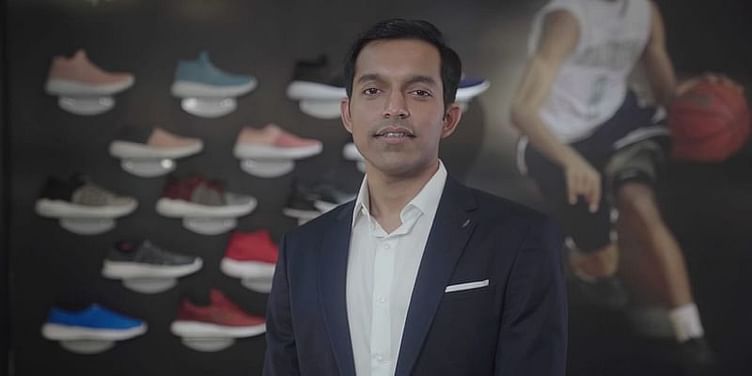 After his online pharmacy startup failed to make a mark, Aayush Jindal joined his family’s shoe-manufacturing company Asian Footwear in 2017. He tells SMBStory why the journey has been a rewarding one.

India is love-struck by the startup ecosystem. While it is true that the Indian startup movement has brought a new wave of a technological revolution in the country, traditional businesses, especially MSMEs, are equally paramount to the success of the Indian business ecosystem.

Aayush Jindal — a young entrepreneur — feels that traditional, family businesses have a lot of scope. However, the sector sometimes gets neglected, which he explains through his own story.

Aayush, after completing his graduation from IIT Delhi, briefly worked with management consulting firm Bain & Company. However, after working with the company for two years, he was bitten by the startup bug and launched an online pharmacy startup Aermed.

“The years starting from 2012-2013 were all about people launching startups. This was also a time when ﻿Flipkart﻿, ﻿Zomato﻿, ﻿Ola﻿, and ﻿Uber﻿ were emerging in the Indian market. I also wanted to do something of my own,” he tells SMBStory.

He says that his parents were supportive, and therefore, he decided to take the plunge. He ran the startup for a few years and even raised angel funding. However, with markets getting dominated by the likes of ﻿Pharmeasy﻿, Netmeds and 1mg, his business tanked.

Fortunately, Aayush had a backup plan — his family’s shoe-manufacturing business. He says, “If you see entrepreneurs, they start with nothing, and some of them don't even have something to fall back on like I did.”

The year 2017 was a turning point for Aayush, when he joined New Delhi-based shoe-manufacturing company ﻿Asian Footwear﻿, founded by his father in 1994.

History of the company

Aayush’s father Rajinder Jindal saw a gap in the shoe market, which was craving for good quality products, Aayush says. This got Rajinder thinking and spurred him into action. He says, “Those days were difficult. It was not like you could go out, raise funding, and grow business.”

Over the years, he has heard several stories about the hardships his father had to face in the initial years of setting up the business. Aayush adds that his father used to take samples to the distributors who would often turn him away.

Rajinder, however, did not get demotivated by these negative forces and persevered. Moreover, he highlights the role of his mother — Kiran Jindal — who played a big part in supporting his father in the business. “My mother was also actively involved in the business. Both of them used to work together as a team,” he adds.

Soon after, the efforts of the family started paying off. Asian Footwear, today, has a network of over 250 distributors across the country. It sells across 25,000 multi-brand outlets (MBOs) and also through ecommerce platforms such as Amazon and Flipkart.

The shoe manufacturing company clocked a turnover of Rs 200 crore in FY20. It has nine manufacturing units located across Delhi-NCR. In fact, the company has onboarded former cricketer Virender Sehwag as the face of the brand.

Painting on a blank canvas

Aayush says that till about school, he did not have much idea about what he wanted to do in his life. In Class 11th, he was introduced to the JEE Mains exam, which he cracked and got into IIT Delhi. He was always, directly or indirectly, involved in the family business.

In the months leading up to him joining the college, Aayush helped his mother list the platform on ecommerce sites such as ﻿Snapdeal﻿, Flipkart, and ﻿eBay﻿.

Finally, when Aayush decided to join the family business, he had the strength of his previous startup experience. In his first few days in the company, he took the time to understand the changes needed to flourish the business further.

He says, “For the first 15-20 days, I sat down with every person in the company to understand what needs to be done. I would conduct these interviews and ask a common question, ‘What are the five things you would like to change in this company?’”

After conducting some 70-odd interviews, things became crystal clear to Aayush. He also appreciates the fact that his father gave him enough space and an empty canvas to paint his dreams. “My father told me that he would stand by my decisions no matter what,” he claims.

This gave Aayush the much-needed confidence to introduce some key changes, including introducing ERP systems, streamlining operations, reducing the turnaround time for the products to reach the market, etc.

At present, he is handling the majority of the business. However, his parents are still involved, wherein his mother looks after the ecommerce section, and his father takes care of the finance department.

The 1991 economic reforms gave way to foreign players to come to India, which helped the Indian footwear industry to evolve over the years. This industry is pegged to reach $1,818 million by 2024, according to Statista.

At present, India has a healthy mix of foreign, as well as homegrown brands, including Bata, Liberty, Woodland, Converse, Puma, Nika, Adidas, etc.

Asian Footwear offers shoes in seven categories, including sports shoes, casual shoes, slippers, school shoes, and formal wear, among others which are priced between Rs 500 to Rs 1,200.

Throwing light on the Indian footwear market, Aayush says, the demand for shoes in India is seasonal. For example, sports shoes get sold more in winters. Open shoes are sold more in the summers. And, April and May see a higher demand for school shoes.

While the industry has experienced significant growth and progress over the years, it is still saddled with several challenges. Aayush compartmentalises these challenges into three main categories.

The first is the lack of technology. Second, skill development among the labour force, since the footwear industry is extremely labour intensive. And the third and final category is the ease of doing business, especially when it comes to matters such as compliance, GST, labour laws, etc.

This homegrown shoe brand is competing with Woodland, Clarks, Cole Haan in the premium men’s segment

The COVID-19 pandemic — which brought the entire world to a standstill — disrupted Asian Footwear’s business as well. Aayush says, at present, the demand is low as people are only spending if they feel there is a need for the same.

Aayush says the company relied on innovation to weather the crisis. It introduced a new category of shoes called Riders 01 in September this year.

Moving forward, he says the company is focussed on bringing out new categories and technologies into the shoe manufacturing business.