This techie made her hometown poster-free, plans to lead cleanliness drives across Andhra Pradesh

An IT professional during the weekdays and a social activist on weekends, Tejaswi Podapati’s organisation has completed over 80 projects of cleanliness in her hometown Ongole, 300 km from Hyderabad.

Hygiene, cleanliness, and sanitation are top areas of concern for all Indian cities. While governments and civic bodies figure out ways to ensure cities are kept clean, many conscientious citizens are doing their bit too, across cities, towns, and villages alike.

Take, for instance, 23-year-old Tejaswi Podapati, a software engineer who spends 70 percent of her income on cleanliness drives. Apart from her day job, the 24-year-old social activist is also the Founder of Bhoomi Foundation, an NGO working towards cleaning and beautifying the cities of Ongole and Hyderabad.

These college students are providing clean drinking water, and empowering villagers through liv...

With a team of 700 volunteers, including IT employees, college and school students, and middle-aged people, Tejaswi has completed more than 80 projects. These projects include cleaning of schools, parks, and hospitals.

Moreover, she has also fixed over 700 black spots which are covered with illegal dumping of garbage and unsegregated wastes, in Ongole, and 70 in Hyderabad.

However, it wasn’t an easy start for Tejaswi, who initiated a solo cleaning drive four years ago.

Speaking to The New Indian Express, she said,

“I hail from Ongole, which had very low hygiene and sanitation levels. But, in 2015, when the Swachh Bharat Abhiyan began, I decided to wield the broom and started my organisation with just 10 volunteers.”

With time, her movement gained momentum and soon people started to support her drive. Tejaswi’s passion did not go down even when she got a job in Hyderabad.

Working in the state capital, a good 300 km away from Ongole, Tejaswi used to travel to her hometown every weekend and continue the cleanliness drive.

Speaking to Deccan Chronicle about the support, Tejaswi said,

“We don’t get any funds. My father usually bears most of the funds. However, a local businessman helped us with Rs 1 lakh, and we spent them on flower pots to decorate the main road. On New Year’s Eve, someone destroyed them. We took it to the authorities but there has been no response.”

Despite several naysayers, Tejaswi went on with her cleanliness drive unperturbed and cleaned the problem areas until people stopped littering.

Soon, things started falling in line for the IT professional. Witnessing her efforts in making her city clean, municipality bodies of nearby towns invited Bhoomi Foundation to carry out similar drives in their cities. Further, the organisation is now also educating children on the importance of cleanliness.

“The MLA too had come to join us. We didn’t ask for any funds and we were doing it all by ourselves. We just needed the authorities to cooperate. We got great help in that regard. What more could we ask for.”

That’s not all; even the government has come forward and appreciated Tejaswi’s efforts. For instance, former Chief Minister Chandrababu Naidu awarded Swachha Andhra award to Tejaswi, and Ongole was announced as a ‘poster-free city’ by the Government of Andhra Pradesh in 2017.

“If you want to see a change in your country, first you have to change yourself, your city next, then your State and this will, in turn, bring change throughout the country,” she told The Logical Indian. 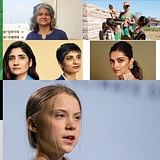 [Year in Review] From Greta Thunberg to Deepika Padukone, here are the top 10 newsmakers of 2019 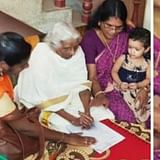 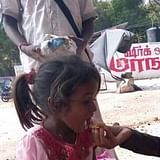