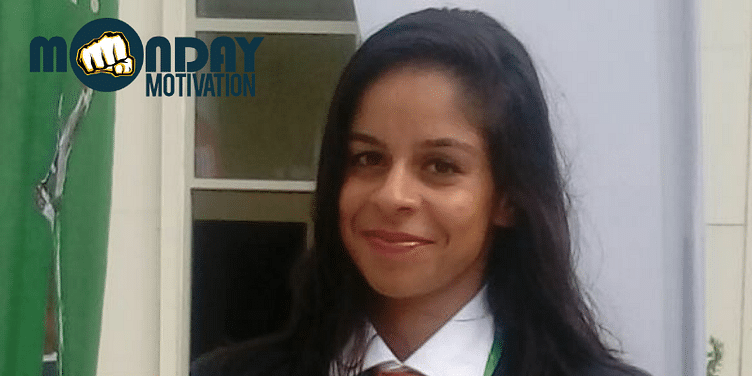 Diagnosed with partial hearing impairment at birth, Vidisha Baliyan had to deal with bullying at school as a child. But she soldiered on to achieve her dreams in sports and modelling. In this week’s Monday Motivation, we feature India’s first Miss Deaf World.

It is said that strength does not come from physical capacity but from indomitable will. This cannot be truer than in Vidisha Baliyan’s case. The 21-year-old from the city of Muzaffarnagar, Uttar Pradesh, is not only a talented international-level tennis player, but also the epitome of confidence and charisma.

Vidisha’s love for sports drove her to bag two silver medals at the national games and even secure the fifth position at the Deaflympics in Turkey in 2017. A few years later, in a quest to try something different, she took to modelling. She surpassed all odds to become the first Indian to be crowned the Miss Deaf World this year in South Africa.

From being diagnosed with partial hearing impairment at birth to being bullied at school as a child and finally achieving a feat in the field of sports and modelling, Vidisha’s journey has been long and trying, but full of hope and courage.

Speaking to SocialStory, she says:

“My journey has not been easy. My 100 percent hearing impairment in one ear and 90 percent in the other meant a lot of people would not even come forward to have conversations with me. They would only try to mock me and strong-arm me. I managed to get through school and college by lipreading whatever my teachers said in class.”

Vidisha’s sheer grit and perseverance enabled her to transform her disability into an ability. And, today, she stands tall as a role model to thousands of differently abled people across India.

Finding herself on the field

When Vidisha was five years old, her parents found out that she was partially deaf and had a speech disorder. When the doctor suggested she be sent to a special school, her mother, Dr Deekshika Kumar, and father, Vipin Kumar, refused.

They wanted their daughter to grow up in an environment that was free from stigma. When Vidisha joined MN Public School in Muzaffarnagar, she had no choice but to match the learning pace of others.

“I used to take a long time to grasp and understand all the lessons. I began attending tuitions after school. My parents also spent a lot of time with me, reading aloud all the chapters from my textbooks. Speech therapy sessions were also a part of my schedule. Despite all these efforts, academics remained rocket science to me. That was when I decided to try out a few sports,” Vidisha says.

Vidisha was 12 when she threw herself into volleyball, tennis, and basketball. However, she developed a liking towards tennis since it did not involve much of a team effort. From then on, there was no stopping her.

She practised for about two hours every day, and dedicated a lot of efforts to improve stamina, motor skills, and hand-eye co-ordination. Vidisha participated in the State-level tournament held by the Uttar Pradesh Tennis Association, and went on to finish as the runner-up. She also went on to win two silver medals at the national games in 2016.

Of lows, and finding herself again

When the 21-year-old got selected for the Summer Deaflympics, her joy knew no bounds. However, very soon, Vidisha’s world came crashing down.

“I injured my lower back while I was preparing for the gala event. Despite that, I continued my training – right from practicing shots and backhand techniques to rallying faster on the tennis court. It was a tough time for me, but I did not want to give up,” Vidisha recalls.

The multi-sport event that was held in Samsun, Turkey, in July 2017, saw the participation of 72 tennis players from different countries. Vidisha not only aced the game but stood fifth in the tournament. Right after, Vidisha’s doctor advised her to take a break from sports, for at least a year.

It was during her resting phase that Vidisha came across The Miss Deaf India pageant in the newspaper and decided to go for it.

“Since childhood, I had an inclination towards modelling. I used to imitate Bollywood heroines and do a couple of dance moves. So, I thought I’d give this a try. Since I had an athletic physique, I trained my body and mind for a beauty contest. The shift from sports shoes to heels was difficult and exciting at the same time,” Vidisha recollects.

During this time, Vidisha also took the help of Wheeling Happiness, a foundation that helps the differently abled through its outreach and advocacy programmes. The organisation supported Vidisha with all the financial cost involved in make-up, grooming, travel, and filming.

Her hard work paid off when she won the title of Miss Deaf India in February 2019 in Assam, Guwahati. She also created history by becoming the first Indian to bag the Miss Deaf World in July in Mbombela, South Africa. “I cannot describe what it felt like. I was on top of the world,” Vidisha says.

On the right track: how this organisation built India's first inclusive railway station for the...

What it takes to be a (role) model

Today, Vidisha Baliyan’s passion and dedication is serving as an inspiration for not just differently abled people, but everyone. She credits her never-say-die attitude to being able to achieve all her dreams.

“My secret to winning battles is inner strength. I believe that most hurdles can be overcome by tuning one’s mind. My immediate goal is to support people like me and channel opportunities for them by establishing a foundation of my own. I know how it feels to be differently abled in a society that is judgmental. It takes both courage and hard work to be able to make a mark,” Vidisha says.