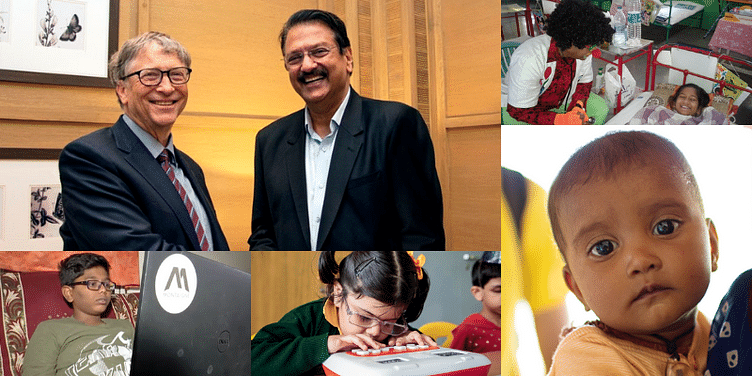 While Pravin Tulpule quit his job as a naval officer and has been delivering smiles to children suffering from cancer for the past 17 years, 12-year-old Siddharth Srivastav Pillai is making news as the child prodigy hired as a data scientist by a multinational company.

The world is filled with a number of people who are doing their part silently for society and often go unnoticed. These unsung heroes are taking these paths-less-trodden simply because they want to lend a helping hand to those who need it the most.

Pravin Tulpule, for instance, quit his job as a naval officer and has been a fulltime clown for the past 17 years, bringing smiles to children suffering from cancer. He goes to hospital wards, bringing with him a bag full of magic tricks and a voice filled with laughter.  Praveen’s life-transforming journey started when he met a little boy whose dying wish was to see a clown. Since that day, Pravin says, he has made sure no child is left without a smile.

Then, there is Ruchit Nagar, who started his NGO ‘Khushi Baby’, inspired by a Yale classroom project and wanting to bridge the immunisation gap in India. Today, he provides a digital solution that saves the lives of thousands of newborns in his home state of Rajasthan.

Let’s take a look at the top Social Stories from this week of individuals who are doing their bit to bring about a change and inspiring others along the way.

Meet this 12-year-old from Hyderabad, hired as a data scientist by a multinational company

Twelve-year-old Siddharth Srivastav Pillai is an avid gamer, who, drawing inspiration from his father, has learnt computing and artificial intelligence.

But, Siddharth is not the first young person in recent times to receive the opportunity to work with a giant corporate. Fifteen-year-old Abhik Saha has built a complete search engine from scratch. Like Siddharth, Abhik became interested in computer programming at the young age of 11 and pursued the subject with passion. By the age of 13, he began running Arnabhik Corp, a website-design company with an international clientele.

According to young Siddharth, his father helped him understand and got him interested in coding.

“The person who helped me a lot to get a job at a young age is my dad, who used to show me different biographies and teach me coding. Everything I am today is because of him,” Business Today quotes him.

In other news, the Piramal Foundation has set up a Tribal Health Collaborative to tackle health issues in the tribal region of India. The Bill & Melinda Gates Foundation will be one of Piramal’s first partners in this collaboration, which will focus on improving health and nutrition outcomes in high-burden and tribal districts, including aspirational districts.

The collaborative, which is slated to be launched in early 2020, will help support the Government of India as it works towards achieving Sustainable Development Goal (SDG) 3 by 2030.

It will work closely with the government by supplementing and complementing its efforts towards achieving Universal Health Coverage.

It aims to build a high-performing, sustainable health ecosystem to address the needs of the marginalised sections of the society, particularly tribal communities, covering a population of more than 150 million across several districts, including aspirational districts in Central, East, and Northeast India.

“India’s focus on health and nutrition, particularly for its most vulnerable, is critical to the country and the world’s efforts to meet SDG3. We look forward to continuing our partnership with the government in its work to improve the health and wellbeing of the world’s poorest.”

Every year, around 50,000 children (in the 0-19 age group) in India are diagnosed with cancer, according to the Indian Cancer Society. These children need utmost care and support. Even a small amount of positive energy can make a difference to their lives and those of their family and caregivers.

Pravin Tulpule was keen on doing just that. He has put on entertaining shows for some of the most vulnerable children at orphanages, slums, shelter homes, and hospitals across India.

Armed with colorful clothes, exaggerated footwear, and a red nose, 58-year-old Pravin has been delighting children suffering from cancer for the last 17 years. With a string of jokes and magic tricks, he keeps his audience engaged for as long as 60 minutes.

“People who spend time in these places must be going through very painful experiences. If I am able to make them forget their pain even for a few minutes, I consider myself successful. The amount of satisfaction I derive is inexplicable,” he says.

Pravin, a President’s Gold Medalist, served in the Indian Navy as a Lieutenant Commander (Communications Specialist) for years, and handled various challenging appointments, ranging from an instructor at the Naval Academy to the Electronic Warfare Officer onboard INS Viraat. He stepped down from his position with the sole intention of making people happy.

“When I resigned from my job in the Naval Service, I was ridiculed. A lot of people did not support my decision. But I knew that my life had other objectives. I wanted to follow my instinct. Had, I stuck around as Commander for three more years, I would have been eligible to receive pension. But, at that point in time, nothing mattered more to me than bringing smiles to people’s faces.”

How Annie, a Braille device developed by Anand Mahindra-backed Thinkerbell Labs, is helping the blind learn

The Bengaluru-based startup makes Braille literacy devices for the visually impaired to help them learn the language on their own.

Its flagship product Annie helps in the early schooling of visually impaired students with its gamified audio lessons imparted over a Braille-based hardware. It is a device specifically designed to solve the pain point of low Braille literacy rate among the visually impaired. It helps the community to learn how to read, write, and type in Braille. The typing follows a universal design based on the standard Braille script.

The output is then digitised, making the feedback loops quicker and evaluation easier. The content for learning is curated to make it suitable for all age-groups, and the medium of instruction is not limited to any language. It also extends to cover accents like UK English and US English.

Jeevika, a Braille learner at Bengaluru’s Jyoti Seva Home for the blind, says,

“It is very interesting to play and to learn reading, writing, and typing on Annie. It helps me to know more about Braille, and I love the commands. It encourages me a lot.”

Infant mortality remains a socio-medical issue of major concern in India. According to media reports, 802,000 infants died in 2017 alone. The states of Uttar Pradesh, Madhya Pradesh, Rajasthan, and Bihar see more than half of the total newborn and under-five deaths in the country.

NGO Khushi Baby was started in 2014 in Udaipur, Rajasthan, by Ruchit Nagar and Shahnawaz to mitigate infant mortality through improved monitoring of antenatal and neonatal healthcare.

“Khushi Baby was born out of a classroom project in Yale back in 2014. The study’s aim was to develop solutions to address the immunisation gap globally and come up with technology to bridge this and help people in the most remote villages,” recalls Ruchit.

Noticing that the women of the region customarily wore ornaments, they decided to embed NFC technology in everyday wearables, provided free of cost. The Khushi Baby team has designed small, durable, and waterproof pendants, taweez, and other wearables, and also developed a mobile app.

The technology enables healthcare professionals to easily access a baby’s medical records and track the due dates for vaccinations by scanning the pendant with the app. Doctors and nurses can thus view the status and accordingly treat the child. The app also allows the professional to update the health status. If the baby is unable to get a vaccine because of sickness or due to limited stock, these details too can be saved on the app. This feature enables follow-ups by nurses.

To date, Khushi Baby has managed to reach 40,000 mothers and infants. According to a study conducted by the NGO, it has also improved immunisation rates by 12 percent and decreased infant malnutrition rates by four percent.

10 bio-entrepreneurs win prizes worth Rs 2.25 Cr from C-CAMP and BIRAC