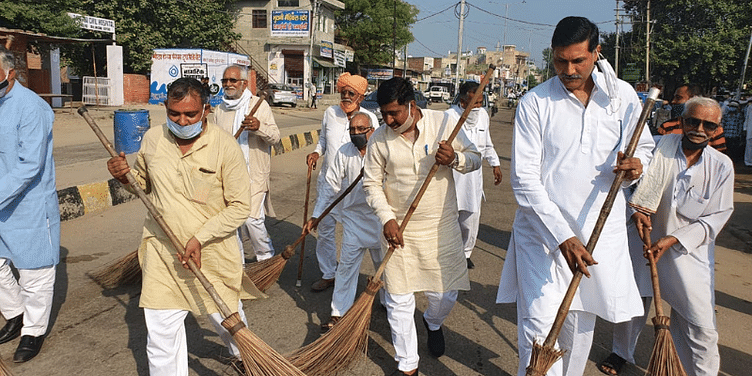 From door-to-door awareness campaigns to deployment of GPS-enabled auto tippers for waste collection, the Municipal Council and the residents of Charkhi Dadri in Haryana left no stone unturned to keep their city clean.

Charkhi Dadri, located in southern Haryana, 110 kilometers from New Delhi, was ranked 11th in the Swachh Survekshan cleanliness survey this year. This was a huge jump compared to its position in 2019, which was 850.

The city, which was once characterised by piles of garbage around every street corner and landfills overflowing with toxic garbage, is now setting high standards for hygiene and tidiness.

The municipal authority of Charkhi Dadri along with fellows from Ashoka University, implemented several measures to make public places spick and span in the city. From door-to-door awareness campaigns and deployment of GPS-enabled auto tippers for waste collection to administration of training sessions and social security for sanitation workers, they left no stone unturned.

“We are living in a time when the significance of a clean environment as well as an efficient waste disposal system cannot be emphasised enough. The ongoing COVID-19 pandemic has not only laid out the prominence of personal hygiene among citizens, but also of upkeep with regard to their surroundings. This pushed us to work even harder,” says Sanjay Chhapria, Municipal Chairman, Charkhi Dadri.

Mahatma Gandhi himself had said, “Sanitation is more important than independence”. In line with just this, on the 150th birthday of Gandhiji in 2014, the Modi government launched the ‘Swachh Bharat Abhiyan’, a nationwide campaign to eliminate open defecation and improve solid waste management.

The Swachh Survekshan survey was floated two years later to monitor the performance of the mission. Commissioned by the Ministry of Urban Development and carried out annually by Quality Council of India, Charkhi Dadri was ranked 11 among 4,242 cities in India.

When the Municipal Council of Charkhi Dadri witnessed the deleterious effects of poor sanitation and unscientific waste management in the city, it decided to set foot forward and work towards reforming the scenario.

The members of the council reached out to students who were part of the Chief Minister’s Good Governance Associates Programme (CMGGAP) to conduct the initial research and charting out an action plan to promote cleanliness in the city.

The CMGGAP, which was founded in 2016 by the Government of Haryana and Ashoka University, has been running successfully with young minds closely engaged with various district administrations in the state to boost governance and public service.

When Akshay Joshi, who presently works as a consultant with the Directorate of Urban Local Bodies, Haryana, was called to work with the municipal body at Charkhi Dadri in 2019, his excitement knew no bounds.

“Myself and a few other student volunteers started off by estimating the funding and resource requirement needed to make people aware of the importance of segregating waste and also keeping public places tidy. We followed this up with outlining the necessary capabilities needed for waste collection and disposal in the area,” says Akshay.

The fundamental structure of the plan was centred around three components – awareness, prompt waste collection and disposal, and empowerment of sanitation workers. As soon as the proposal was finalised, Sanjay and his team at the municipal council were quick to act. They obtained adequate capital from Chief Minister Manohar Lal Khattar during his Jan Ashirwad Yatra in September last year.

Sensitising residents about the best waste management practices is always imperative in order to create mass impact. Hence, the council kicked off a door-to door campaign to spread awareness and encourage them to not litter and dump segregated waste only at the designated points.

“We received a lot of support from the CM’s office to run the campaigns. The residents also cooperated with us and lent their ears. The outpour of positive responses pushed us to stay the course,” adds Sanjay.

When it came to implement systematic means to collect solid waste, the council focussed on setting up dustbins around every other street corner. This in turn averted the instances of individuals throwing garbage on the roads or pavements. In a span of around eight months, they successfully managed to install more than 5,000 bins across the city.

Besides this, the council purchased 20 e-rickshaws and used the already existing 24 auto tippers to collect waste from households and commercial establishments regularly.

“What really worked was the installation of GPS in all garbage transportation vehicles. Not only did this help in terms of mapping the route, but also in monitoring the efficiency of waste collection. Each of the tippers had two in-built compartments – one for dry waste and the other for wet waste. Within a few months, the door-to-door collection in the city jumped from 60 percent to 100 percent,” explains Akshay.

During the course of implementing the initiatives, one major hurdle that the municipal council faced was with regard to disposing the waste properly. This was due to the lack of recycling units and resource recovery facilities in the locality.

Empowering the lives of sanitation workers

According to the Intercontinental Journal of Human Resources Research Review, 2014, there are approximately 1.2 million sanitation workers in India. And most of them are from economically poor backgrounds where even basic amenities like healthcare are not accessible.

However, Charkhi Dadri did not overlook the quality of life of its sanitation workers or safai karamcharis.

“We undertook a slew of efforts to ensure the comfort of our safai karamcharis. They were trained to use protective equipment and collect as well as handle waste. Additional care was taken to deposit their salaries on time and also get them covered under the Pradhan Mantri Jeevan Jyothi Yojana,” notes Sanjay.

Arun Kumar, a safai karamchari who has been working with the municipality of the city, reiterates,

“We generally work for eight hours in a day and our salaries are being credited on time as opposed to a few years back. The council has also started distributing masks, gloves, soaps and protective uniforms frequently. I am personally very happy about these initiatives,” he says.

Today, Charkhi Dadri has become a role model for many other cities in India. It has shown that orderly planning and execution can go a long way in maintaining good hygiene and sanitation. While the city is gearing up to bag the first spot in the Swachh Survekshan survey next year, it is also aiming to overcome its challenges concerning garbage clearance by establishing more waste processing and Materials Recovery Facilities (MRF).