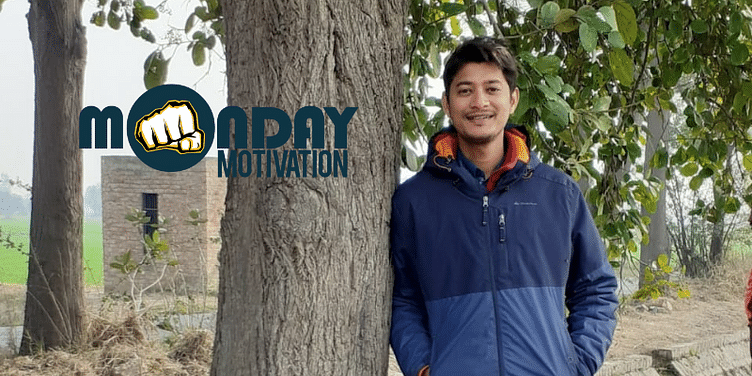 Vipesh Garg, a Horticulture Development Officer in Punjab’s Mansa district, has his own 100 sq m fully sustainable farm. He is also helping other farmers with unique techniques and also encouraging children to maintain their own gardens.

Vipesh Garg, a horticulture development officer in Mansa, Punjab, grew up watching his mother’s love for plants. No doubt she had a green thumb, but she also put in lot of hard work turning the front yard of his house into a vibrant patch of green. Though a teacher by profession, she lived like an farmer, growing a number of vegetables including tomato, onion, okra, bottle guard, peas, garlic and even herbal plants like aloe vera.

Inspired by his mother, Vipesh became inclined towards farming. He even recollects stealing plants from a doctor’s garden in his hometown in Ratia, Fatehabad. However, the doctor complained to the police. Though he did not repeat the feat, his interest in gardening never waned.

Not surprisingly, Vipesh went on to pursue a bachelor’s in Agriculture Science and a master’s in Vegetable Science and chose a career path in the horticultural sector.

Since 2019, he has been building his own mini farm in his hometown, where he grows a wide variety of organic produce on a 100 square metre plot of land. These include over 100 types organically-grown flowers, fruits, vegetables and medicinal herbs and plants. What is interesting is that he practises various sustainable methods that include mulching, organic in-situ composting, seed saving, soil regeneration, bio-enzyme preparation, and others.

“My primary aim is to practise ‘Biomimicry’, to imitate the natural flow of an uninterrupted forest. The forest is able to naturally maintain an ecosystem in that mini biosphere with its produce clean air, store water and decompose, while yielding a healthy produce,” Vipesh tells SocialStory in a conversation about his efforts in promoting sustainable farming.

Vipesh is also on a mission to actively help other farmers make their own bioenzymes and products to create their own sustainable farms. He also organises workshops for those interested in organic farming, one of which was even attended by the doctor who had complained to the cops 13 years ago!

In addition, he also takes classes for students in Mansa as a part of his job as a Horticulture Development Officer.

Farming in his genes

Vipesh was inspired by his mother who believed “we must make the food we eat”, and this sustainable lifestyle made him take a bigger step by helping others follow the same path.

“My mother, being a self-sustaining gardener inspired me to develop this as a hobby, but I didn’t realise it would be such an integral part of my life,” he says.

After completing his master’s degree, Vipesh took up a job as a Horticulture Development Officer (HDO), and has worked in more than 87 villages across India as part of various projects, and is currently posted in Punjab’s Mansa district for the last two years.

Talking about his farm or mini-forest, Vipesh says, “The farm is like a laboratory for me; this is where I experiment on different combinations to learn what processes and products work best for which crop,” he says.

He also practises Miyawaki gardening, a technique introduced by Japanese botanist Akira Miyawaki that helps build dense native forests by building dozens of the same species together, and making them maintenance-free after three years.

“We are also partnering with the government and the Senior Superintendent of Police under the MGNREGA scheme, to create one Miyawaki forest in every police station in Punjab,” says Vipesh.

Under the state government’s ‘Tandrust Punjab Mission’, as the nodal officer for school gardening, Vipesh introduced a programme called ‘School Edible Gardens’ as a part of the syllabus. The initiative not only raises awareness about the ill effects of pesticides but also provides sustainable solutions for home-based farming.

“We visited schools, took hands-on classes in our own gardens which were like open learning centres. We also gifted them seeds and asked them to grow their own gardens at home and share the pictures with us,” shares Vipesh.

In 2019, they trained about 500 students to grow their own oyster mushrooms and hope to target at least 1,000 students this year. The mushrooms are prepared on very easily available substrates like wheat and paddy straw.

Kinnow or Mandarin orange is one of Punjab’s most abundant fruits, a hybrid of two citrus cultivars – Citrus nobilis and Citrus deliciosa (though it looks similar to a regular orange, it is different in taste). In fact, about a quarter of India’s Kinnow produce is sourced from the state.

However, a lot of farmers lose a high percentage of the overall yield due to premature falling that happens before the harvesting period. So, Vipesh suggested an idea to curb this massive wastage of the fruit by making bioenzymes, which are natural fertilisers and an efficient pest repellent.

“Our farmers turned the Kinnow wastes into citrus bioenzymes. Right now, we are even asking them to produce these bioenzymes in bulk, while also looking for a market for these products. This not only brings in additional income but also cuts down the cost of cultivation and increases sustainability,” explains Vipesh.

So far, he has helped over 25 farmers become sustainable in their gardening efforts and many more are currently being trained.

Vipesh is also trying to extend the concept to school gardens where the kitchen wastes can be used bioenzymes to make bodywash, cleaners, shampoos, etc. “We are trying to integrate our projects and work with different stakeholders of the community,” he adds.

Vipesh says the bioenzyme project has received a lot of recognition during the pandemic.

“We want to make the school project a more integral part of the curriculum,” says Vipesh as he plans for the future.

When it comes to the bioenzymes, he wants to ensure that more awareness on it is raised among farmers, so that he can create sustainability not only with farming, but also by creating organic bath products with the bioenzymes.

“Punjab enjoys huge popularity in the citrus fruit sector, and there is a growing demand for the citrus bioenzymes in metropolitan cities like Bengaluru. This can really aid the farming crisis that we are seeing in the state,” he says. “We also wanted to revive the Kambucha drink in Punjab in the coming months, and make it available to a larger market awaiting the product.”

Also, with a large number of people in urban areas aspiring to have their own gardens, Vipesh wants to extend these gardening schemes to these sectors so that they have a wider reach.

10 important incidents and debates that shaped India in 2017