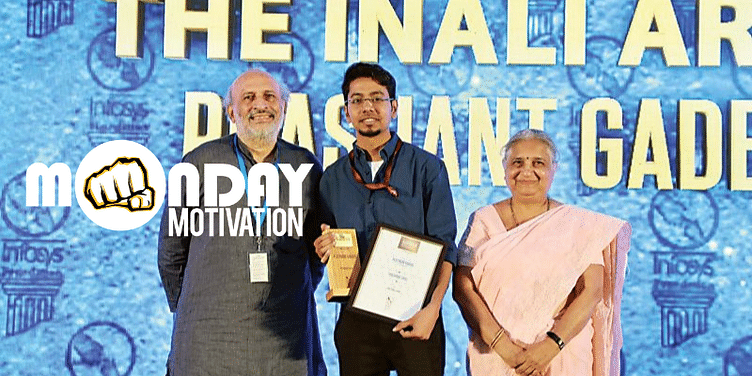 Prashant Gade founded the Inali Foundation through which he provides free prosthetic arms with advanced sensory technology to the poor.

If somebody had told Prashant Gade in 2014 that he was going to impact thousands of lives, he would’ve probably laughed it off. As the founder of ﻿Inali Foundation﻿, Gade has helped more than 3,500 people with prosthetic arms.

Gade’s father wanted to ensure that his son got the best education to progress in life. Thanks to the advice of his late grandfather, he managed to join an engineering college in Maharashtra but was soon disappointed.

“Things were not what I expected, because rather than learning something innovative, I realised that it was all about the grades, and getting a job. I wanted to do more with my life and find my purpose,” Gade tells SocialStory.

Unhappy, Gade dropped out in his third year. He then moved to Pune in search of a job and was successful when he found one in Fab Labs, that was looking for someone with a basic background in robotics.

“Even though my pay was only about Rs 5000 a month, my love for working in labs and creating things helped me push through it,” he says. “While working here, I started on a distance learning six-month course called ‘Fab Academy’, by the Center for Bits and Atoms of the ﻿Massachusetts Institute of Technology - MIT﻿.”

In order to complete the course, Gade also needed to complete a project. He read about Nicolas Huchet, a person who lost his right arm and built his own bionic arm. Huchet became an inspiration for Gade’s project.

Working day-and-night on the project, Gade was completely absorbed in it until he met a seven-year-old girl in Pune who was born without arms.

“In our country, it is sad how people label a physically disabled girl - that she is not eligible for marriage. I did not want this girl to be in that position. So, I decided to help her out with prosthetic arms. When I approached some of the hospitals, I was shocked to learn about the whopping costs,” Gade exclaims, adding that it cost about Rs 12 lakhs for one hand.

With her hand size-changing every year, Gade didn’t think this was feasible for her struggling parents. Baffled by the figures involved, Gade decided to do a little more research and found out that more than 500,000 people lost their limbs every year across the world.

Nearly 40,000 in India alone, and 85 percent of these individuals were living without any solution, simply because of cost factors.

Realising that he had found his purpose, Gade dropped out of his course for the second time in life, much to the disapproval of his father. They enrolled him in another course that would aid him in getting a few job offers.

“I cried to them, telling them that this kind of education was not for me, but in vain.”

With about 250 people in one class, Gade felt that the absence of one guy wouldn’t make a difference. So, he spent the class hours in a hostel room, and with funds from a crowdfunding campaign, started working on the arms.

One day, Gade got a call from an NGO in Jaipur, which wanted to assist his efforts. After showing them the designs, they asked him to show them a few prototypes. He even got paid a sum to build the prototypes.

He then sent a picture of this cheque to his father, who wasn’t too happy to learn that his son had yet quit another educational course, but finally said that he had decided to let Gade fend for himself.

He set off for Jaipur, and found a small, affordable room for rent on the outskirts of the city. With only a little money in his hand, Gade walked 10 kilometres to the NGO every day, and built multiple prototypes ranging from Rs 20,000 to Rs 1 lakh, only to hear that these were unaffordable for the NGO considering the budget was only around $100 (Rs 7000) per arm.

“By then, I didn’t have much money left. In fact, if I paid my room’s rent, I wouldn’t be able to afford two meals a day,” he says.

Gade started thinking out of the box, and decided to look for everyday items around him to make the prosthetic prototype– silicon grip fingertips from a hot water bag, a JCB toy lever to mimic the finger’s movement and a badminton racket’s threads to work like muscles, on being connected to a motor that allowed this movement. The costs involved? About $75.

The NGO’s director was impressed by the prototype, however, it wasn’t easy to make more of these as money was still a crunch.

So, he uploaded the videos on YouTube which impressed a professor based in the US, who then invited him to present it at a biomedical conference. He then travelled to the US for the same.

“After my presentation, a lot of attendees and professionals reached out to help, and even though I didn’t want monetary help, I did share the problems that we were facing, along with the number of people who needed the prosthetics.”

The very next day, the attendees offered to help him with 10 machines, which was an emotionally overwhelming situation for Gade.

He then came back to India with these machines and started the Inali Foundation in 2015, registered in 2018.

Skilling for employability: how Sarthak Educational Trust is empowering PwDs find jobs during the pandemic

Gade has come a long way from his $75 prototype, and has built many designs at Inali with the help of his versatile team. The first version uses a single button to open and close the palm, aiding in basic functions like drinking water, and even writing.

The second type is a little more advanced. It uses sensors that are placed on the hand which detects signals from the brain and directs the motors inside the arm to move accordingly.

“Each of these prosthetics has a warranty of about 2.5 years. And in case of any functional defect, we help them fix it. We also tell them how they can maintain the arm,” says Gade.

It’s simple everyday joys that one takes for granted that really makes the difference. When a woman approached the foundation looking for a prosthetic arm, and once the team had helped her with it, tears rolled down her cheeks. She said she was just so happy that she could finally comb her daughter’s hair.

Inali is able to provide free prosthetics thanks to the support of the ﻿Infosys Foundation﻿. “We registered for Aarohan Social Innovation Award 2018, where we bagged the first place."

“What really touched me was when Sudha ma’am (Sudha Murthy) said that whether we win or not, the foundation would always back our efforts,” he said.

In fact, Gade says that they call the veteran philanthropist the mother of Inali Foundation.

Apart from Infosys, Inali is also backed by other organisations like the SRF Foundation, ﻿NASSCOM﻿.

Many corporates, like ﻿Xiaomi﻿India and Gilette, are also going to lend support through their CSR initiatives.

On January 1, 2021, Gade’s efforts were recognised on Kaun Banega Crorepati’s Mission Karmvir episode, where he participated along with actor and humanitarian, Sonu Sood. Ever since, they have been helping each other, with Sood connecting them to those in need of prosthetic arms.

While a lot of new innovations are on the way, that’s not what defines Inali’s future.

“In the next 10 years, Inali should be an organisation that can bring independence in the life of People with Disabilities, and make them feel no different from any other,” says Gade.

“If you make one person’s life better, you never know how many lives you can save. I hope that with such advancements in technology, no person is left disabled,” he signs off.