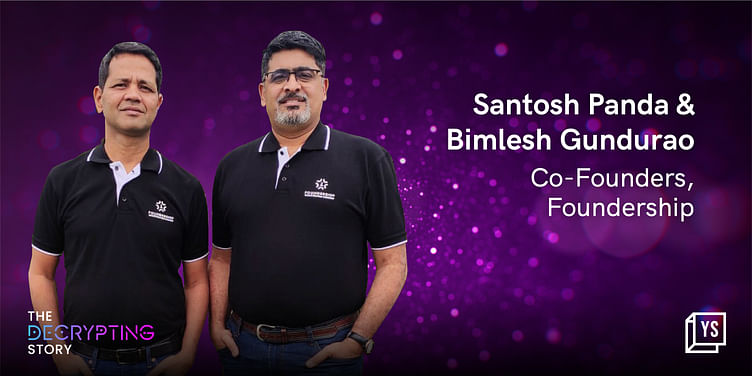 It's no exaggeration to say that recent events have made the Web3 terrain difficult: founders are thinking of shutting shop, investors have been singed by big bets that have gone wrong, and several early-stage Web3 startups are staring at a funding drought.

All this has increased the clamour for Indian Web3 accelerators and startup incubator programmes that help founders understand the patterns and challenges in the sector.

﻿Foundership﻿ is one among them. It helps early-stage Indian Web3 startups find mentorship and get discovered by marquee venture capitalists and angel investors like Hashed, Blume Ventures, Gemba Capital, Paradigm Shift Capital, and Nischal Shetty (Founder of ﻿WazirX﻿ and ﻿Shardeum﻿), among others.

The idea to set up Foundership came to industry veterans Santosh Panda and Bimlesh Gundurao in January, after they began offering probono services to startups with the intent to promote Web3 entrepreneurship in Tier II and III cities. But it was in May that Foundership kicked off its six-month LaunchCamp programme.

“It is extremely challenging to build a Web3 startup at a million-dollar valuation as a solo founder or even with two co-founders if they do not have the necessary ecosystem to back them,” says Santosh in a conversation with The Decrypting Story.

Foundership offers a three-week incubation programme called 0xCamp, where startups can pick from several networking opportunities like masterclasses and guided sessions with coaches.

From this cohort, Foundership picks a handful of startups for the intensive six-month LaunchCamp, after which it will pick up a 1.5% equity stake in a company. “When we announced our programmes, we expected 50-60 applications, but we received 250 applications from early-stage entrepreneurs," says Santosh.

How does the accelerator unfold?

Foundership makes it easy for any startup to join 0xCamp. Any Web3 company with a minimum viable product (MVP) and early traction can apply. Once in, the startups are mentored by Indian and global industry experts. These include those from Coach DAO (Decentralised Autonomous Organisation) which has big names like David Atkinson (Commercial Director of Holochain), Simon Emanuel Schmid (Solutions Engineer at The Graph), Ramani Ramachandran (CEO of Router Protocol), Greg DSouza (Co-founder, bl0xchain), and Subhendu Panigrahi (Co-founder and CEO of Skillenza), among others.

For a founder like Aju G Nair who set up LinkDot—a Web3 credential platform—having a systematic process to shape their product at an MVP stage was crucial. “As an early-stage startup, we lacked mentors with substantial expertise and operational abilities to advise us,” he says, adding that this was part of the reason he joined 0xCamp.

At the end of the programme, about seven startups are selected to be part of LaunchCamp where dedicated coaches mentor them to convert their ideas into workable business models. According to Raushan Sharma, Co-Founder of Web3 native blogging platform Trikl, engaging with the coaches at LaunchCamp helped the startup to pivot its business model entirely. His company is one of three from the programme that is in the process of raising capital from LaunchCamp.

“We assess the entrepreneurs who have the potential to broaden their horizons by their ability to accept feedback, challenge their own theories, and then come back and present it to the coaches,” says Subhendu Panigrahi, who is currently mentoring Web3 startups LinkDot and Recorem.

Coaches involved with Foundership are encouraged to have a skin-in-the game approach. To this end, they track the progress of these startups actively. “We conduct one-on-one weekly calls with them and my job is to make these startups market ready, fundable and to open the doors of venture capitalists in six months,” says Subhendu.

Of course, it doesn't all just boil down to raising capital. To Bimlesh it is also important to get the right guidance at a critical time. “At the end of the day, if you don't have someone to bounce off your ideas as a founder, then capital is worthless,” he says.