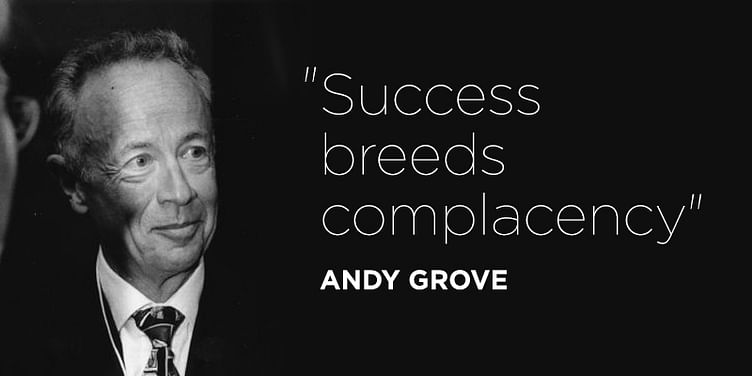 Intel’s legendary co-founder and former CEO Andy Grove passed away on Monday, March 21, 2016. He was born as András Gróf in Budapest in 1936. His life is the stuff of legend – a poor immigrant from Hungary who fled war-torn Europe after World War II and Soviet rule, graduated from University of California at Berkeley, and established a career in the semi-conductor industry.

Intel would go on to be a major shaper of the PC industry, and Grove became renowned as a thought leader, industry visionary and business strategist. In 2000, he was diagnosed with Parkinson's disease, and contributed to a number of foundations that sponsor research towards a cure.

One of his most cited quotes on unrelenting innovation is: “Only the paranoid survive,” which is also the title of his second book, a classic on how companies must guard against corporate complacency (his other book is ‘High-Output Management’). But that is only the tip of the proverbial iceberg: here are over 50 quotes from this technology and business visionary, sampled from his books and from numerous media interviews. These gems will stand the test of time and continue to inspire us all in our own entrepreneurial journeys.

A fundamental rule in technology says that whatever can be done will be done.

A strategic inflection point is a time in the life of business when its fundamentals are about to change.

Accept that no matter where you go to work, you are not an employee you are a business with one employee, you. Nobody owes you a career. You own it, as a sole proprietor.

Admitting that you need to learn something new is always difficult. It is even harder if you are a senior manager.

Altogether too often, people substitute opinions for facts and emotions for analysis.

By the late '90s, those who were paying attention perceived the Internet as a 20-foot tidal wave coming, and we are all in kayaks.

Figuring out what to do is important. But doing it and doing it well is equally important.

Give me a turbulent world as opposed to a quiet world and I'll take the turbulent one.

I believe in the value of paranoia. Business success contains the seeds of its own destruction. The more successful you are, the more people want a chunk of your business and then another chunk and then another until there is nothing left.

I have been quoted saying that, in the future, all companies will be Internet companies. I still believe that. More than ever, really.

I really don't have much respect for the people who live their lives motivated by an exit strategy.

I tend to believe Mark Twain hit it on the head when he said, “Put all of your eggs in one basket and WATCH THAT BASKET.”

I was running an assembly line designed to build memory chips. I saw the microprocessor as a bloody nuisance.

If the world operates as one big market, every employee will compete with every person anywhere in the world who is capable of doing the same job. There are lots of them and many of them are hungry.

If you are a founder of a business, you understand the business implicitly. You understand it through your skin.

Leaders have to act more quickly today. The pressure comes much faster.

Not all problems have a technological answer, but when they do, that is the more lasting solution.

Nothing operates with the factors of 10 as profoundly as the Internet.

People in the trenches are usually in touch with impending changes early.

Privacy is one of the biggest problems in this new electronic age.

Risk is the cost of aggressive objectives.

Status is a very dangerous thing.

Strategic changes doesn't just start at the top. It starts with your calendar.

Stressing output is the key to improving productivity, while looking to increase activity can result in just the opposite.

Take a bit of the future and make it your present.

Technology happens, it's not good, it's not bad. Is steel good or bad?

Technology is both an end in itself and a means to other ends.

The ability to recognise that the winds have shifted and to take appropriate action before you wreck your boat in crucial to the future of an enterprise.

The greatest danger is in standing still.

The Internet is redefining software.

The lesson is, we all need to expose ourselves to the winds of change.

The most powerful tool of all is the word ‘no.’

The new environment dictates two rules: first, everything happens faster; second, anything that can be done will be done, if not by you, then by someone else, somewhere.

The person who is the star of previous era is often the last one to adapt to change, the last one to yield to logic of a strategic inflection point and tends to fall harder than most.

The strategic inflection point is the time to wake up and listen.

There are so many people working so hard and achieving so little.

There is at least one point in the history of any company when you have to change dramatically to rise to the next level of performance. Miss that moment - and you start to decline.

Values and behavioral norms are simply not transmitted easily by talk or memo, but are conveyed very effective by doing and doing visibly.

We managers get a little more obsolete every day.

We're in the early stages of recasting our commercial lives, our professional lives, our health practices, everything.

Whatever success we have had in maintaining our culture has been instrumental in Intel's success in surviving strategic inflection points.

You can be the subject of a strategic inflection point but you can also be the cause of one.

You have no choice but to operate in a world shaped by globalization and the information revolution. There are two options: adapt or die.

You must understand your mistakes. Study the hell out of them.

You need to plan the way a fire department plans: it cannot anticipate where the next fire will be, so it has to shape an energetic and efficient team that is capable of responding to the unanticipated as well as to any ordinary event.

Your career is your business, and you are its CEO.