Deepa Kiran, infusing life into stories, through the art of storytelling 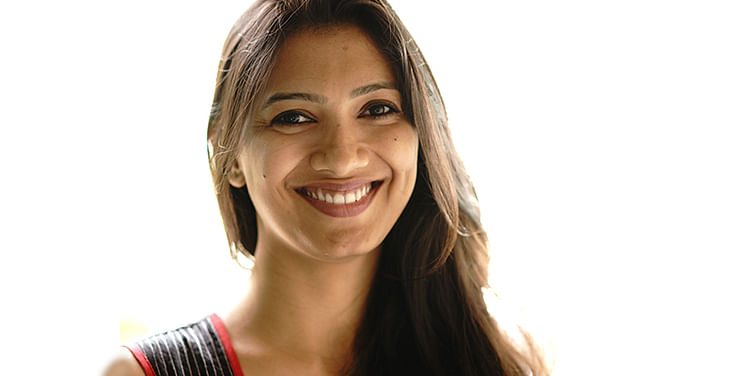 In the movie Tamasha, Ranbir Kapoor’s character Ved is a lover of stories from his childhood days. In fact, the storyteller who he listened to as a child turns out to be the biggest influence in his life, and Ved finally leaves his corporate job to be a storyteller.

As a child, Deepa Kiran too loved the stories that her father told her. She grew up with books around her, watching world cinema, and writing for pleasure. At the age of 13, Deepa wrote in her diary that she wanted to become a storyteller one day. She herself forgot about it, but time brought life to that dream. Today, at 39, Deepa is among the most renowned storytellers in the subcontinent, and the first Indian to have been invited to Iran’s prestigious Kanoon Storytelling Festival. The Hyderabad-based mother of two boys is multilingual too – she speaks her native tongue Tamil, as well as Hindi, Telugu, English, Malayalam, Bengali, Marathi, Punjabi, and Kannada.

Maya Angelou once said: “You can’t use up creativity. The more you use, the more you have.”

Deepa is the best example – her creativity gave her varied tastes throughout her life. As a teenager she wanted to be a nutritionist, and did BSc in Nutrition from Hyderabad Osmania University. At college, she was active in NCC and wanted to join Air Force, but later dropped that idea.

Finally, for the love of the language, Deepa went on to do Masters in English literature at University of Hyderabad in 2000, simultaneously doing part-time jobs at All India Radio and teaching spoken English. On and off, for years, she would teach Class XI and XII students at Kendriya Vidyalayas across States in fill-in roles.

Narrating syllabus through stories made her realise how effective the tool of storytelling is. In 2005, Deepa joined English and Foreign Languages University (EFLU) for PGCTE. Realising that she wanted to teach English through stories, she started her MPhil on ‘storytelling in language classroom’ in 2007. However, she had to discontinue due to health issues. But storytelling could not wait any more.

Tale of the storyteller

It was at a summer camp for children in Nashik in 2008 that Deepa first performed. A trained classical dancer who also plays violin, she realised that performing arts had nurtured her sensibilities. “I was at ease using my body to tell a story with stage comfort,” she says. She brought music with her jingles, shankh, ektara, duff etc. and a little bit of dance to her stories. Very soon, she became an ‘official’ storyteller.

Deepa says that as a storyteller you have to perform and be a person addressing the audience directly. “Storytelling helps in teaching; the student does not even have to know it. I implemented it in school, and got amazing results in 15 days.” Deepa now conducts teacher training workshops too.

Deepa is often part of heritage walks in Hyderabad. She tells stories of monuments with characters like Thenalirama. One of her favourite memories is a storytelling show at ‘Society to Save Rocks.’ “It was the story of Rama Setu, on the importance of rocks. Next day, a mother called me to say that her four-year-old son, who was present at the show, ran to the rocks at his school and started telling everyone about how rocks are our friends,” Deepa smiles.

For a storyteller, the place is as importance as her story and audience. “You need an undisrupted place, not with windows open and a loudspeaker next door. Although I have had 200 people in my audience, about 40 are ideal. I go in advance to the location, arrange the place and decide where the audience should be,” says Deepa. Her audience often participate in the stories.

In 2013, Deepa published her story, an audio-and-print book The Royal Mistake, in which the entire story is narrated in rhyme, with background score. An ardent lover of folk tales, Deepa has done productions on Indian mythology, one of them being a show on bhakti poets of India. She believes that every audience connect to it despite age and background. “They are specific and universal at the same time, and you can bring in music,” she says.

Besides India, Deepa has also performed in Vietnam and Iran. The latter has a rich storytelling tradition. The government has actually employed storytellers. “India needs to emulate it, storytellers here are written off all the time; nobody finds it as a profession. Iran celebrates it, and have fund to spend for it,” Deepa says. She founded Story Arts India Hyderabad to promote the art, a few years ago.

Deepa has done hundreds of performances in eight years, charging up to Rs 20,000 for corporates, and much cheaper for schools and NGOs. He favourite storytellers include Jeeva Raghunath, Richard Martin from Germany, and Kiran Shah from Australia. Deepa says that thanks to social media, people are getting more familiar with the concept of storytelling. “Earlier, when I tell someone that I am a storyteller, the normal response is ‘But what do you really do? Are you a writer?’ Things are changing though,” says Deepa.

Imagine a world where we have more storytellers, and get to listen to more beautiful stories. If you are as lucky as Ved, you might just find yourself in one of those stories.