From a tiny garage to India’s largest online poker site: Meet the kingpin of Indian poker 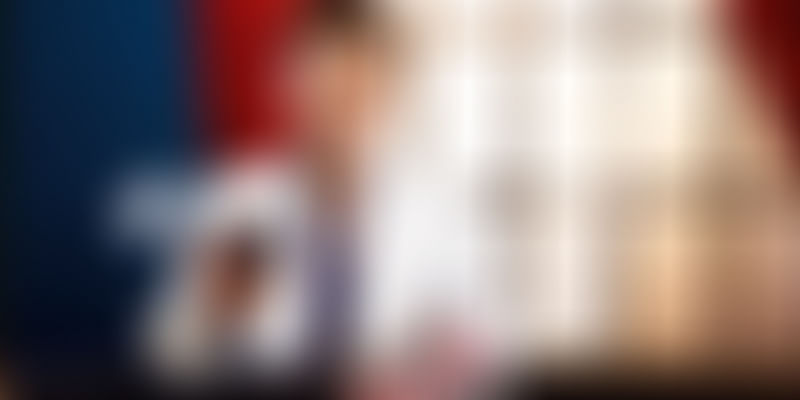 His education may not have gotten him the career he desired, but Amin Rozani holds all the aces now. Here is how the 35-year-old upscaled the poker business he set up in his garage into a full house on India’s top online poker gaming website.

As the philomath and I cross paths for the very first time at his Bandra office, something tells me that the man synonymous with online poker in India is aware of his roots at all times.

Maybe it has something to do with how a photograph of the Indian Poker Championship in all its glory - a sea of elegant blue roundtables embellished by the who's who of Indian Poker and celebrities alike- sits next to a picture of the dingy garage in Bandra that Amin Rozani started out from.

Or the fact that well into his success story, he paid a tribute to his childhood marketing hero with the most indigenous campaign, and with flair, at that.

Or perhaps it is his eyes, that well up with as much pride when he speaks of his cold selling days, as they do when he recounts how many fortunes have changed on Spartan Poker.

This is what makes the story of Amin Rozani even more heartening.

When Amin says he is a Bandra Boy, he isn’t just referring to the quintessential schooling at St. Andrew’s or gallivanting at National College. He has spent time in the bylanes of Mount Mary, scuttling from one phone booth to another as a phone operator when he was 14 years old. His father owned a small iron and steel business while his mother worked as a beautician.

Amin, who claims he’s always had a head for numbers, studied computer engineering. His career failed to take off when the economic slowdown in the country made qualified engineers jobless.

In October 2002, Amin, just like most professionals, did the BPO crawl. He started his career at Birla Transworks at a salary of Rs 9,000 a month. He switched to Wipro and WNS Global, where he moved up the rungs into training and leadership roles. He joined Standard Chartered Bank and in an inspired moment procured a Six-Sigma Black Belt. But then the banking sector crashed and he lost his job. He would have to start all over again.

Amin started consulting with Tata, Jaguar and Land Rover, where no two days were similar. With the unpredictability of the situation gnawing away at him, his mind found refuge in online poker, through Zynga. The year was 2009.

The itch and the switch

Raking in his winnings in fake chips by the truckload, his mathematical mindset, newfound passion for the game and love for hustle led him to think of a way to turn those chips into a dream, and grow that dream into a business.

“I realised how intelligent the game was, and that it’s a whole industry out there,” he recalls.

The more he played, the hotter the trail got. Heart in hand, he, along with a friend, made an impromptu plan to go to Goa to spend a night at the casinos. That night turned in some serious riches, in currency as well as knowledge.

“I started fixating on that; it really resonated with me as a potential business. I decided to study this further and went to Macau with a friend. We played there, saw how their rates vary, and how they have adapted the game to their audiences,” Amin recalls.

Understanding that the game was not only wildly popular but also rather formalised worldwide, he carried the euphoria back to India and set up a small poker game in a friend’s garage in Bandra.

“We started off with five players in a small garage painted by me and my partner, a rental air conditioner and a buy-in of Rs 100. We had the vision to scale up, but it seemed like a dream,” he recalls.

With two tables in the garage and a head in the clouds, Amin’s endgame was getting clearer to him every passing day.

Serendipitously, companies like Royal Turf, BluffDaddy, and 888Pokerz contacted him and asked if he would like to become an affiliate.

Keeping his then day job at Essar, he worked the graveyard shift for years to feed the poker revolution. He started building a database as this group grew, frequenting Goa to map out opportunities. At the same time, he expanded their poker room model to more and more locations in Mumbai.

Once word got out that Mumbai’s poker kingpin was looking to expand his network, many strategic alliances were proposed to him. Amin connected with Sameer Rattonsey and Rajeev Kanjani, both popular poker players from Mumbai, and together, the trio changed the way poker is played in India.

In November 2014, they were offered the charge of the Deltin Royale Poker Room in Goa, one of the most popular casinos in the sunshine state. He relocated to Goa, sensing that the powerhouse of Indian poker resided there. Eventually, he joined hands with the India Poker Championship and started it up in a poker room in Deltin Royale.

“Our biggest challenge was infrastructure. In Goa, casinos are not allowed on land. Hence, a poker room could only be afforded by bigger casinos that could open on the sea,” he says.

By now, Amin had created a name for himself in Mumbai and people knew he was no rookie. As a result, he met well-wishers as well as trouble makers.

“The competition would offer half price to my customers, give crazy deals. It was guerilla warfare and I could never have been able to afford all this. I only had my savings. Eventually, the competition realised that we were all part of the Great War – to get poker to the mainstream. So, eventually, we joined forces for many things,” he recounts.

The tournament started scaling on auto-pilot but Amin still felt he had some unfinished business when it came to the poker industry. As the word digital graced more conversations and the idea was embraced by more business models, Amin had his eureka moment – and it manifested as a “Spartan” invasion of the space.

“We had a market benchmark - Adda 52- so the same team at IPC formed Spartan to leverage both brands through an online platform,” he says.

Spartan started tying up with various youth-centric events such as Umang, one of Mumbai’s largest college festivals.

“The aim was to position poker as a sport, and it helped massively with traction,” he says.

TV host and anchor Rannvijay was also roped in as a brand ambassador, as his name is synonymous with sports.

During that period, an unrelated campaign in Mumbai had led to the word “poker” being splashed on many walls in the city. After taking the initiative to cover up the graffiti, to capitalise on the buzz generated, Amin’s ad agencies suggested they employ the most rustic route. Amin, recalling the Mouthshut campaign done in colours and styles he still vividly remembered, decided to go with the rickshaw branding technique for Spartan.

When they started, three active tables meant a great day but it wasn’t long before that number rose to six, eight, 12, and, at peak hours, 15 tables after they associated with IPC.

Today, they have 60-70 active tables and at least 800 people on the site at any given point.

To further boost growth, the company started their own monthly online tournament, Millionaire. It’s now edging towards its eleventh edition and the number of active tables on Millionaire day nearly doubles. One can register with Rs 5,500; almost a 100 people get prizes while the winner bags Rs 20 lakh.

Spartan’s main competition is Adda52, and the two share a Batman-Jokerish rivalry.

“They’re also fantastic with their marketing and I love competing with them,” he says. “But to stay in the race, we’ve employed various tactics like ensuring that our cashouts are the fastest in the industry. Our average turnaround time is two-four hours whereas the next one in line takes two days. We pay TDS for the players. Our customer service is top of the line as we know how much trust goes into a relationship when money is involved,” he says.

The first states to make poker legal were Karnataka and West Bengal. Nagaland is issuing licenses to operate poker chains all over the country. There’s already a case to legalise poker in Gujarat while Spartan has filed a writ petition in Maharashtra.

“The lack of awareness is the biggest hurdle in legalising poker. Rummy is legal but because poker is relatively unpopular, it is judged from a moral standpoint. We have the will to go to the Supreme Court and battle it out to the finish,” Amin says, putting his cards on the table.