Once a helpless mum who missed her son’s school admission dates, she now ensures 70k mums don’t miss theirs 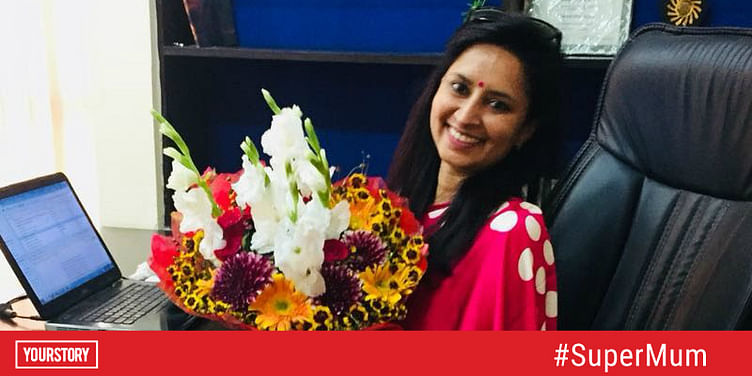 Like many women, Anjali Srivastava packed up her life in India – which included a coveted job as a college lecturer – in order to live with her husband in the US.

And then, life happened.

The mother in her took precedence over her techie side, as she assumed the mantle of being a stay-at-home mom when her son came along. The family then moved back to India. But the joys of being a full-time parent come to a staggering halt quite early in Delhi NCR, when it’s time to initiate your child into the real world. A Wall Street Journal article dubbed the Delhi nursery school admission process “tougher to crack than Harvard” – because it is laden with opportunistic vendettas, ridiculous wait-lists, underground corridors, and schools competing with one another and opening applications at different times in order to pressurise parents into securing seats. Thus, when it was time for Anjali’s son to get enrolled, she not only missed the minuscule window the school had kept for applications, she also found herself overwhelmed, running pillar to post amassing information for all the alternatives in the city.

So life came full circle when the maternal and techie sides joined forces, for she had resolved that no other mother will face this ordeal of missed admission dates again. What’s more – Anjali did it, and continues to do it as a service to parents everywhere free of cost.

Born to a rather formidable woman who was a school teacher herself back in the day, Anjali was raised to value ethics, integrity and honesty – and she, in turn, applied these learnings to train in softball, and eventually led the Punjab team to win three National Championships. She holds a Master’s degree in Computer Sciences and Application (MCA).

Anjali started her career as a Computer Science college lecturer in Jalandhar and, in 2003, upon getting married, she quit that job in order to move to the US with her husband. They returned to India, right around the time Anjali’s son was born, and therefore, she made a conscious decision to be a full-time parent. In 2008, when her son was two-and-a-half and enrolled into playschool, the family took a short vacation for 15 days – but when they returned, to Anjali’s utter horror, the application windows of almost all the good schools had been closed, and there was no medium that disseminated this update. “I was freaking out and I recall wondering how there was no quick and easy way to find out about admissions,” she says.

A little probing told her that one had to check all the leading newspapers regularly, besides checking the individual websites of schools, or simply call the schools to stay in the loop. So, one fine day, when Anjali was waiting in queue to collect an admission form from a school, she started doing some digging. Interacting with some of the other parents queued up with her, she learned that everyone had been frustrated with the gap that she had previously felt personally victimised by – and resolved on the spot that she would solve this problem.

How she’d do it, however, was yet to be solved. “Coming from a technical background, my husband and I knew we needed to use technology to solve this and that's when SchoolAdmissionIndia.com was born. I could feel the same passion towards this project as I once felt for softball,” she recounts.

They quickly put together a website with minimal investment, and collectively put in efforts to gather and post rudimentary but vital information about different schools in one place; be it fees, application due dates, documents required etc., after verifying the information with the respective schools, so that parents and guardians do not miss admission windows due to a lack of information.

This thought was pure – and it was heartfelt endeavours just like this that catapulted them into virality. The defining moment was when they decided to go one step further in 2008, and up the ante on their good samaritanism, by actually going from school to school in Noida, clicking pictures of lists put up on the notice boards, and subsequently posting them all on their site. Word about this got around like wildfire. “After we did it a couple times, parents started calling us to ask when we would post the results of schools next. We used to a get huge amount of traffic on result days and used to get really excited in early days,” Anjali says.

SchoolAdmissionIndia.com amassed goodwill through aggressive selfless service, and came to be one of NCR’s most searched admission information portals. What’s more impressive is that it has reached the top spot without compromising on the objectivity of information, and by staying staunchly opposed to advertisements – knowing fully well that the advertisers’ vested interests would dilute the essence of what it is trying to build. “Others who are in this field are running ads from schools and sharing parents’ information with the schools as leads. But all that would be against our ethics and defy the sole motive of providing unbiased information. And this model itself has become our differentiator,” Anjali explains, adding that they even keep upgrading their technology to provide information in the best possible manner.

“Maintaining the site was a big challenge at first. I used to check with schools for accurate information, update the site and send newsletters out with the latest admission dates. I then thought of involving parents and the community by creating a WhatsApp and Telegram group and then created a mobile app for the same,” she says.

In the first year, they amassed about 500 registered users, which multiplied six-fold in the year after that. In the same year, Anjali, along with husband Pranjal, started CodeFire technologies – a software services startup where she now heads the HR function – which is not only how SchoolAdmissionIndia is currently funded, but also how it got its first couple of dedicated full-time developers. “That’s when the site started evolving from being a blog to more of a social network,” recounts Anjali.

Towards the end of 2012, SchoolAdmissionIndia had about 15,000 registered users, and became self-sufficient, as users collaborated and shared information more and more. Today, this figure stands at 70,000, still without any paid advertisements or marketing.

As far as Codefire is concerned – it boasts of a 45-strong team, and delivers cutting-edge technologies – right from web and mobile applications to AI and blockchain. Under Anjali’s leadership, CodeFire was rated as one of the top 50 places to work by Silicon India in 2014.

Lately, since they have been getting requests from parents all across India to list schools in other cities as well, they are actively moving forward in that direction. “With this vision, we are now letting schools self-register themselves and provide important information to parents. A hundred schools have already signed up in the past five to six months,” she says.