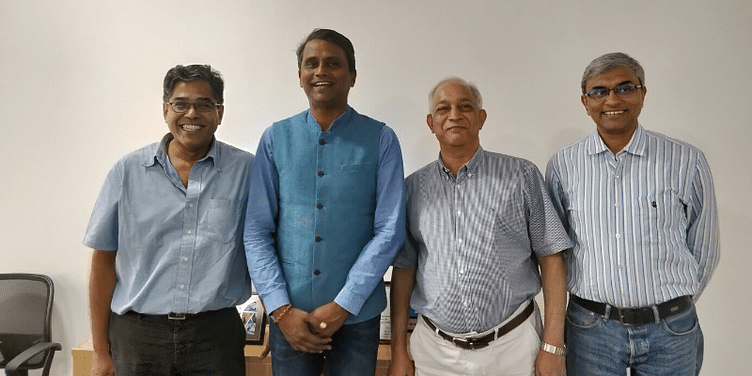 We live in an age when cyber threats are becoming more of a norm than the exception for business houses. While there are several security solutions to protect data and information in the market, they remain susceptible to breaches. With the continuous and tremendous advances in computing power, the standards of encryption always remain a step behind.

QNu Labs, a Bengaluru-based startup, is attempting to address this concern by applying quantum technology. Their products do not use classical methods of encrypting keys, but instead provide a new paradigm in encrypting keys using quantum physics principles. The startup’s offerings are primarily focused on security for the cloud and internet space.

“Since many of the Optical Fibre Cables (OFCs) that are used today are quite easy to tap and only as safe as the security of their keys, there is always a possibility for information to be leaked. However, at QNu Labs we use something called quantum cryptography, which employs photons (light particles) to provide random keys, such that attackers will not be able to access or clone them,” says Sunil, Founder and CEO, QNu Labs.

This means all of QNu Lab’s products use a dedicated channel to transmit a secure private key that is used to decrypt data. The data is shared over a traditional network, whereas the secure keys are provided over a channel powered by quantum physics.

QNu Labs was incubated in 2016 at IIT-Madras. The four founders, all connected through a set of common friends, are scientists and technocrats, each with more than three decades of corporate experience.

The startup was born with the intention of protecting national secrets, but the larger inspiration was for an Indian company to build a global product. The team of four set out to usher in a new paradigm in data security using photon light particles.  What followed was an intensive two years to build the technology.

“All of us are from different backgrounds. Before joining QNu Labs, I was the COO at Paladian Networks, a cyber security firm, as well as at EdgeVerve, a subsidiary of Infosys,” says Sunil.

Srinivasa Rao was the MD at Morgan Stanley, while Dr Anil was a professor at IIT-Madras and Mark the CTO at Enventure Technology Services. “Today, we have around 20 people working with us – from physicists to business developers and techies,” adds Sunil.

Secure data all the way

All the products of the startup are geared to make encryption hack-proof using quantum cryptography. A Stanford project defines quantum cryptography as ‘the cutting edge discovery which seems to guarantee privacy even when assuming eavesdroppers with unlimited computing power.’

Tropos, the random number generator, adopts the principles of quantum mechanics to generate truly random numbers. These numbers are needed for various applications like lotteries, one-time-pads, and key generation in cryptography. Most conventional computers cannot generate true random numbers as they are either subject to bias or can be predicted easily.

Armos, the 19-inch hardware box quantum key-distribution product, provides protection to data while it is at its most vulnerable: in transit. It works by encoding single photons of light sent through a dedicated fibre optic channel.

The Heisenberg Uncertainty principle ensures that any attempt at meddling with these keys causes a detectable disruption. An alert and a report on the location of the intrusion are generated. Since the hardware destroys any keys that are compromised and spawns new ones, the attacks are deterred even before they happen. Prithvi Kini, Head of Operations at QNu Labs, explains,

"Armos is very user-friendly and the deployment does not disrupt existing crypto infrastructure. It seamlessly interfaces with the existing encryption network to create quantum-safe security.” She adds that a lot of effort went into the making of this product, with references drawn from digital electronics, optical technology, mathematics, and quantum physics.

The company’s third offering, Hodos, is a quantum secure platform that integrates the existing infrastructure for the users to plug and play.

All the above products are assembled either in the company’s in-house optics lab or with the help of manufacturing partners. The startup, however, has to import a number of the components. The team has filed a total of three patents so far and is planning to file eight more in the near future. They have also graduated from the Cisco Launchpad accelerator and the Netapp Excellerator programmes, recently.

The startup’s main revenue streams are direct product sales, channel partners, custom turnkey project implementations, and consultancy through academic institutions. It has bagged seed funding through HNIs thus far and is now scouting for more funds from VCs to invest in go-to-market strategies and to accelerate on its roadmap.

QNu Labs is set to extend its global footprint with the launch of an entity in the US by the end of the month. Sunil says,

“Everybody is dependent on data in today’s world. Hence, the need to have a fool-proof security system is more than imperative. China is already on its way in building quantum fibres and networks. This means the need to use quantum cryptography is even more if people want to truly protect their data. By introducing the QKD-based Armos, we are accelerating the world’s transition towards future-proof security,” quips Sunil.