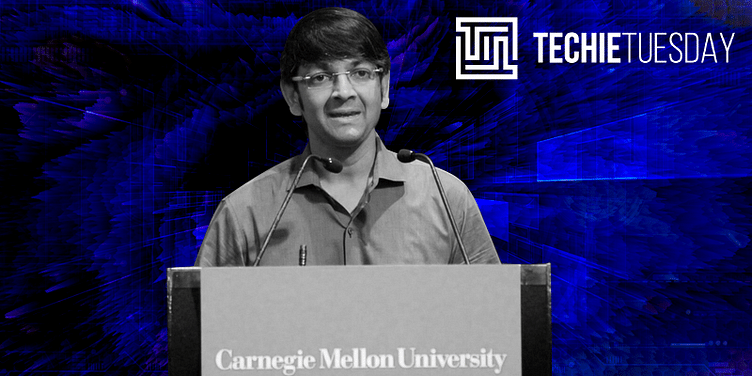 In this week’s Techie Tuesday, we feature Lalitesh Katragadda, the man who built Google Map Maker and Google Maps for India. Currently, as the founder of Indihood, the serial entrepreneur is building tech to create impact at scale.

Lalitesh Katragadda, the man who built Google Maps for India, believes he is a ‘one hit wonder’.

In his 12-year-long journey with Google, Lalitesh was part of the core team that built Google India and was instrumental in building Google Maps India and later, the Google Map Maker -- the map editing service that sought to improve the Google Map experience.

"Map Maker is the only product I’ve built for scale," says Lalitesh, who is a firm believer that technology should always be built from scratch and create impact at scale.

Still, Lalitesh is anything but a ‘one hit wonder’. While Google Map Maker may have earned him much-deserved recognition as a notable techie, Lalitesh has a slew of other achievements to his name. They range from building space robots to tech that can empower communities to solve for India’s next billion. To be sure, the one constant in each of his tech innovations has been this: creating for impact.

“You can only experience the beauty of technology and knowledge when you use it and build something from scratch. If you are using a lot of existing systems and building on top of what others have built, you won’t experience that power and beauty. You can create impact by taking your perspective, and creating a real thing,” he says.

After working with Google co-founders Larry Page and Sergey Brin, and CEO Eric Schmidt to build Google India, his last project at Google was with Sundar Pichai on Android KitKat, one of the first operating systems that would work on low-cost phones in India. He also worked with Infosys co-founder Nandan Nilekani to build India Stack and Avanti Finance.

Presently, as the co-founder of Indihood, Lalitesh and his team are building tech to help people compile information to build something greater and bigger. He is focussed on building collaborative maps, and says his larger vision is to build a world where the average Indian can use the internet and find a solution to their most basic problems.

YourStory charts the journey of a small-town boy who made it big in the world of technology, and is now building technology to solve for India’s next billion.

Born to a middle-class Telugu family in Tanuku, Andhra Pradesh, Lalitesh's early days as an 'average student' offered little hint of the tech whizz he would later become. But he was drawn to science and technology even as an eight-year-old, making frequent visits to the iconic Strand bookstore in Mumbai, then Bombay, with his father to read books on the topic.

"Since childhood, I wouldn’t do something that didn’t make sense or exciting. So, the mode of learning was different from what I wasn’t aligned to, and because of that I would do poorly in school," Lalitesh recalls.

But neither that, nor his dislike for mathematics at the time would deter the techie from later using a lot of math to build the Google Map Maker and Google Maps for India. Admittedly, the techie, who pursued his engineering from IIT Bombay, attributes much of his will to overcome his fears to life lessons learnt when on a trek to the Himalayas during his summer vacation at IIT.

“Some of the walks were on the sides of steep mountain cliffs... One slip and you’re done, so you had no choice but to be physically and mentally present. Being present helped me overcome my fears and my passion for science and technology took over,” says Lalitesh.

Learning from the best

After his return, he made full use of the computer lab at the aerospace department and thus began his coding journey. “I had the good fortune of being taught an introductory to computer science course by VD Phatak. He would invent a new language and ask us to write a program in that language. I was blown away with what can be done with machines,” says Lalitesh.

During his fourth year of engineering, a new field emerged - robotics. Carnegie Mellon was the only university offering the course, but Lalitesh’s grades did not make him eligible for the paid scholarship for an MS degree; instead, he went on to pursue MS in Aerospace from Iowa State University.

Later, in 1991, he studied MS Design at Stanford University, nurturing his dream to 'design entire systems and not parts,' and then to Carnegie Mellon to pursue his PhD in Robotics.

At Carnegie Mellon, Lalitesh learnt from great faculty like Raj Reddy, whose PhD thesis was on speech recognition, and Pradeep Khosla, who worked on autonomous systems, which is responsible for a lot of modern electrical vehicles and high-speed robots. He also worked with William Whittaker, who built the first robot to go into the nuclear disaster area in the 1970s.

“I learnt to turn ideas into research and turn research into implementation,” says Lalitesh, who, with Whittaker, built the Lunar Rover in 1997.

The need to start up

While working on robotics at Carnegie Mellon, Lalitesh decided to start up.  While Lalitesh had always wanted to pursue a career in research and academics, he was also a passionate about building something that solved problems. Being a faculty wouldn’t allow him to do that and so he decided to take the entrepreneurial route and start up.

After graduating in 1997, Lalitesh started Sphereo, a space robotics startup, in San Francisco in 1998 along with his classmate John Murray. “I had no idea of the difference between a technology and a product, and we were building a technology and not a product. We built a platform called Active Track and E3,” says Lalitesh.

But Sphereo soon hit a rough phase when contracts began to dry up during the dot-com crash.  Lalitesh says, there were no finances in the company, and employees had to go without salaries for months. He was less worried for himself and his family, but was more worried that he had not paid salaries to his co-workers for nine months.

“Building a startup tests you on many levels - it tests your mettle and your character. It is when your true self emerges,” he says.

Fortunately, the team knew Wayne Rosen, the VP of Engineering at Google, and through him, the Sphereo team met with Larry and Sergey for a likely exit. With each team member having accrued up debts of close to $30,000, the wait for a call back from the Google team was an agonising one.

He says, “Fortunes turned when my daughter was born. Our house was mortgaged and we were out of options. But within a week, I got an email from Google that they were interested in purchasing, and everything changed,” says Lalitesh.

Google acquired the startup in 2002 in a fire sale.

During his time at Google, Lalitesh had the opportunity to fuel his passion to build tech from scratch and for the masses, and create impact at scale. It was around 2003 when the company set out on a mission to organise all the world’s information and make it universally accessible and useful.

“Larry and Sergey knew it couldn’t be done sitting in California. If you want to solve problems for the users, you need to be where they are, and a chunk of that innovation had to happen in an emerging market,” says Lalitesh. It was then that Lalitesh along with the core team started writing the blueprint for Google India.

“Now, if you give engineers a job of setting up an office, they will do a Matrix, and we did that. We were doing underground meetings because we wanted to go with a strong proposal to Larry. But Wayne came to one of these meetings and said the project was approved,” recollects Lalitesh.

The team moved to India in 2003, and Google India began operations in April 2004. While the consumer operations were set up in Hyderabad, an engineering unit was started in Bengaluru.  The team also started building Google India Maps in 2005 and later, the Map Maker project.

Lalitesh says, the charter of Google India was to create products that were made in India but useful for the world. “The coding began in 2005, and in 2006, we had the first version working. The team would work on Adwords in the day and in the night they helped map the first 30 cities of India,” says Lalitesh.

Speaking about challenges while building a product, Lalitesh says, when he first came to India, he had no idea about the neighbourhoods and routes, and he drove a GPS truck to map the roads, which cost nearly $10-$15 per kilometre.

“India had three million kilometres and $45 million wasn't a possibility. Even if we approached tech giants like Yahoo, there wasn't any substantial return on investment for this idea. Since the roads keep changing every five years, spending $45 million every five years isn't something India could afford,” says Lalitesh.

Lalitesh built computational geometric tools to make sketches of routes and maps and developed Google Map Maker. After two years of working on the prototype with his friend Sanjay Jain, he tested it at the Hyderabad office.

Still, many were skeptical about the ability of engineers in Bengaluru to successfully execute a project of this scale. As such, the project was moved to California. Even then, the India team refused to give up and continued to build.

Lalitesh’s last project at Google was with Sundar Pichai on Android KitKat. After working for 12 years with the search engine giant, he quit Google in 2014 and went on to start up again in 2015.

To be sure, all those years at Google had done nothing to dim Lalitesh’s entrepreneurial spirit. Nor had it lowered his passion to create impact at scale through tech.

Which explains what he's building with his latest venture, Indihood -- a hyperlocal, crowdsourcing tech platform that empowers communities to solve socio-economic challenges at scale.

Indihood may still be in its early days, Lalitesh says, but it seeks to empower communities to solve livelihood problems -- allowing him to realise, once again, his dream of building tech for impact at scale.