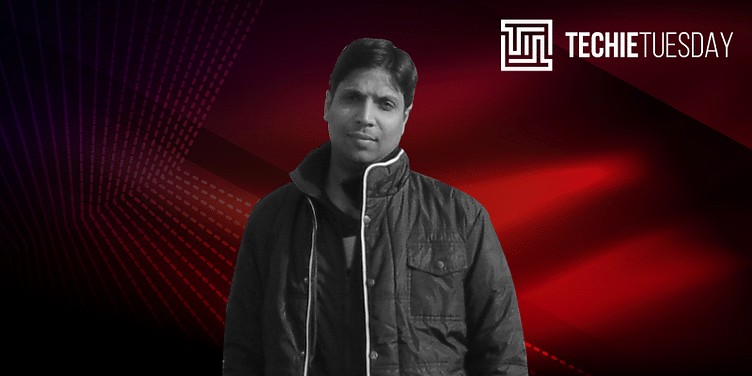 The jingle “Paytm karo” may have spread like wildfire during the 2016 demonetisation, but Paytm’s wallet business started way back in 2014.

A small part of Paytm’s parent company, One97 Communications, the wallet business was built by a small internal support team headed by Hitesh Gupta.

The team went on to bag Uber as a client in 2014, followed by BookMyShow, and there was no looking back.

Hitesh, who led the Paytm team, didn’t follow the cookie-cutter model to success. He didn’t go to IIT or a pedigree university. Born in Jaipur, he completed his schooling and engineering in the Pink City. Even his first job was in Jaipur.

For this son of a government chief account officer and a homemaker, engineering was the de facto choice as he was good at mathematics and science.

One of three siblings, he recalls they always had healthy competition on who would score the highest marks in math.

Hitesh’s first stint with a computer was when he was in Class 3. It was the late 80s and early 90s, and the entire class would get a basic idea of programming as they huddled around one machine. His first hands-on experience came in Class 7 with the programming language, Basic. And he was hooked.

It meant Hitesh spent a lot more time in the computer lab than necessary, and scored well in math and physics. He joined Maheshwari Public School for Class 11 and 12, and even appeared for the IIT entrance exam.

It was the year 2000, when IT was first being introduced, and many of his batch mates hadn’t even seen a computer. However, Hitesh’s work from Class 7 in those computer labs helped. He revealed an aptitude for programming, and ended up teaching his batch mates – he even took tuitions in his second year.

“Data structures was a tough subject, but I was a topper. This gave me confidence that I could do something in computer sciences,” Hitesh recalls.

During his third year of engineering, the internship year, instead of joining a corporate, Hitesh and a few of his friends decided to build a product that would automate attendance systems in college. It would give teachers handy, easy-to-read reports.

“It was developed in Visual Basic and MS Access, and I even got Rs 1,500 from my college as a token of appreciation,” Hitesh says.

A year later, in 2004, Hitesh got placed in Data Infosys, a US-based software company with operations in Jaipur. He joined, but soon realised that he had to move as he was keen to build and “Jaipur wasn’t a techie city”.

Working for a corporate for the first and last time

"Cintel was recruiting in Mumbai. I didn’t tell anyone; I went in a general train to Mumbai, and came back and told everyone. And I joined a corporate with 20,000 employees,” Hitesh says.

He soon worked on a project for American Express. He started as a Java Developer, and built the back-end credit card platform known as advanced payment processing.

“I started liking the payments business; the power of using computation with high numbers fascinated me. But I hated a few things. I didn’t know what was finally happening with the code. And I realised that corporate wasn’t my cup of tea. In 2006, I quit,” Hitesh recalls.

After that, he didn’t work in a corporate again. He chose to work with small teams, where he knew the problem he was solving and the impact it would have.

The beginning of the payment journey

Hitesh's journey took him to Indus Logic, Noida, in 2006. He worked on a product, Mantas, which tracked “fishy” transactions and raised alerts. “I was able to see the problem I was solving, get data from banks, run algorithms, and run alerts to banks. I would get feedback and work on it immediately,” Hitesh says.

That project scaled and was acquired by Oracle; it soon became Oracle Mantas. It was during this time that Hitesh wanted to go to the US. However, it was 2008, a time of recession.

“I am big risk-taker. If you calculate the risk, and if it is in your favour go for it,” Hitesh says.

The year turned out to be pivotal for Hitesh. But his love for home and hearth had him return to India after a short six-month stint in the US, where he worked for IDB Bank, for the implementation of Mantas.

In India, he decided to join One97 Communications. At that point, the company was working in the emerging telco domains, where Hitesh headed the division for two years.  The team provided telcos with fixed bid servers, and would charge per server. The telcos would ask the One97 Communication team to build as many as they could.

“We were a B2B business where we couldn’t directly reach users of telcos. Also, there were TRAI regulations that cut value-added services, and there wasn’t much business growth,” Hitesh says.

Why not Paytm it?

It was then that the company decided to get into the payments business. And in 2012, Paytm was built.

The team had thought of building a payment gateway over the IVR that they provided telcos. The users’ airtime on IVR was chargeable, and the team had to build the users through the payments they got through credit and debit card. This is what led to the payments vertical.

Paytm was a simple acronym for ‘Pay Through Mobile’, and worked as a recharge system. But the problem was simple: whenever there were failures, it would take seven to 10 days for the money to reach a consumer’s bank account. That brought the wallet into existence.

The wallet would ensure that the money would immediately reach the consumer’s wallet. In January 2014, the businesses of payments and the wallet went commercial after getting the RBI licence.

However, it still remained a small part of the overall business. “We weren’t the first in the market, but our payment instruments were ahead of the time. The wallet could be seamlessly used. And we got our first breakthrough when Uber came,” Hitesh says.

The RBI guideline said no company could use an international payment gateway, as they didn’t have OTPs. But Uber wanted a seamless experience where users didn’t need to put OTPs and wait.

“We sold the wallet as a use case, where they would use it in a seamless way. We showed RBI the way our compliance and security worked when they had doubts, and got the green signal,” Hitesh says.

When the team made the proposal, the idea was only on paper; there wasn’t a single line of code to back it up. It took 15 days and an equivalent number of all-nighters to build the product. Uber was then used by executives, and Paytm soon got the needed recognition. This was soon followed by the BookMyShow integration.

From a support team to a focal point

In December 2014, the team went to China to raise funds from Jack Ma, the Founder of Alibaba.

“There were 16 people who went to China. At that time, the marketplace was still the key focus so 13 people were from the marketplace and three were from payments. But on the very first day, we realised that the funding discussion was around the payments business not the marketplace. We raised $500 million in February,” Hitesh says.

By March 2015, Paytm became No. 1 in payments and had over one lakh new wallet subscriptions. “We got 1.7 million subscriptions in a day. We had a target of 100 million by December 2017 but we hit that in June 2015 itself,” Hitesh recalls.

The team hit the first roadblock soon. When Paytm integrated with Uber, it hadn’t anticipated that kind of scale or transactions, being one of the many payments companies in the market.

“We were the only payment option for Uber. And it was stalled; we weren’t able to fetch wallet balances and rides couldn’t be booked. We went back to the drawing board and rewrote the entire systems. We got in tech that was new or nobody had used, and built something with the capacity to take 50x the load. We built our own data centres to support our transactions,” he says.

“In the seven-year journey, we hit 20 million transactions per day and saw many rounds of funding and growth.”

In early 2016, before demonetisation, Hitesh decided to see the other side of the payments world. He helped Oxygen as group CTO for few months. There was a big difference: Paytm was B2C while Oxygen catered to the B2B market.

He reworked on building the platform and focused on what more could be done in rural areas and Tier III and IV cities. Here, banking was still done in the traditional way, and people were looking for solutions for panchayat and village areas.

Soon, Hitesh got an opportunity from Sequoia Capital to work for an Indonesian payment company, Midrans. It is now the payment system for Gojek, and Hitesh was part of the migration journey.

“India is ahead in tech and usage of payment systems, thanks to RBI. In Indonesia, legacy systems still dominate. I worked to scale the systems from zero to 70 million transactions, and wanted to do something of my own,” he says.

In 2018, Hitesh founded PayMonk, with a focus on rural banking. He explains that a lot of people in rural India weren’t aware of digital payments. PayMonk would use agents from kiranas to help people with digital services.

A world away from payments

“I was a hard-core techie and product guy. Negotiating with banks and sales were new things, but I learnt. In 1.5 years, we got a Rs 200 crore GMV. It was then that reconnected with Amit (Lakhotia),” Hitesh says.

Amit and Hitesh had worked together in their Paytm journey. Hitesh was keen to explore something other than payments, and parking seemed to be an immediate need, one that was “similar to Paytm”.

“Automation is done. In 2020, tech will be more of reacting on prediction, doing without being asked. I took on the challenge. People have done ecommerce, food, advertising, fintech; this was new,” Hitesh says.

He says with the parking solution solved for, they are now focusing on providing an experience. This includes booking a parking slot on the go, and other value-added services such as getting a car cleaned, valet, on-demand driver, and much more.

“It is unchartered territory, and I want to build something that lasts,” Hitesh says.

He feels that a lot of techies now build things that are similar to what is out there and use easily available tools, but this won’t scale.

“Real engineering is understanding the problem, deep diving into the core. The main core of engineering is to build for scale; if you can’t do that, don’t build,” Hitesh says.

“Any solution that can’t be scaled should be killed because anyway it will be killed. The only reason Paytm scaled was because the tech was ahead of the business. It should aid the scale of the business.”