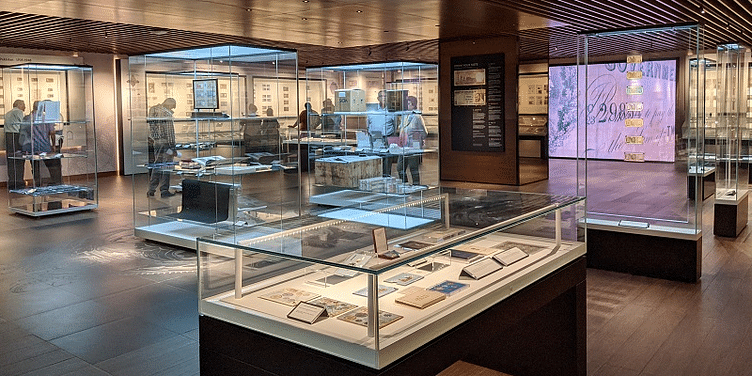 In this two-part photo essay, we showcase the currency collection of this unique new cultural attraction, along with founder insights.

Many people collect stamps and coins as a hobby, but Rezwan Razack loved collecting Indian paper money. His collection over five decades now has a permanent home in Bengaluru, with the launch of the Museum of Indian Paper Money.

Rezwan Razack is Co-Founder and Joint MD of the Prestige Group, and the museum is housed in Prestige Falcon Towers on Brunton Road. The terrace of the building offers stunning views of Bengaluru, but the real cultural treasure is on the third floor where the museum is located.

Members of the media recently attended the launch of South India’s first currency museum. It seems set to become a popular cultural, tourist and educational destination over the years.

A tour of the museum is like a tour through India’s colonial and post-independence history, with a collection of impressive depth and diversity. Some of the banknotes date back to the early 1800s; some notes are even uniface or one-sided.

(Note: The photographs in this pictorial essay were taken before the national lockdown due to the coronavirus. The visit to the museum was not in violation of any public safety guidelines.)

The collection has notes representing British India, French India, Portuguese India, the Princely States of Hyderabad, Jammu and Kashmir, and Saurashtra. There are even Prisoners of War Coupons to Indian notes issued in the 19th century, as well as particularly rare notes that were printed in India but also used in Burma and Pakistan during the early turbulent years of independence.

The inauguration featured a panel discussion by Rezwan Razack and Dr C. Rangarajan, former Governor, Reserve Bank of India (RBI). Rezwan is also co-author of The Revised Standard Reference Guide to Indian Paper Money, released in 2012. His second book is titled One Rupee - One Hundred Years (1917-2017). It marked the 100th anniversary of the issue of the one-rupee note in India.

“The story of money is woven into our very being, uniting us, dividing us, giving us a sense of identity and indeed mapping people or the nation’s powers, progress, crises and triumphs,” Rezwan said, at the museum’s inauguration.

He explained that the museum is an attempt to leave behind a legacy that showcases the rich history of India’s journey via currency. “I consider it a comprehensive restoration and preservation of an important national heritage,” he added.

While the museum focuses largely on paper notes, there are no plans at the moment to add a broad collection of coins, Rezwan said, in response to a question from YourStory. “My aim is to educate, inform and entertain visitors with this unusual medium,” he said.

The collection begins with displays of barter systems and a few coins, followed by the history of paper currency. Other highlights are cheques, stamp papers relating to Indian paper money, and booklets.

Once the museum is opened again after the coronavirus lockdown and with public safety measures in place, it will be sure to attract audiences of all ages and professions. Those eager to glimpse our history through something as powerful and insightful as the currency note will surely be rewarded with this visual and panoramic treat.

Now, what have you done today to pause in your busy schedule and find new ways of harnessing your creative pursuits?