45 artists, 90 artworks – how the ‘Kala for Vidya’ exhibition celebrates creativity and raises funds for education 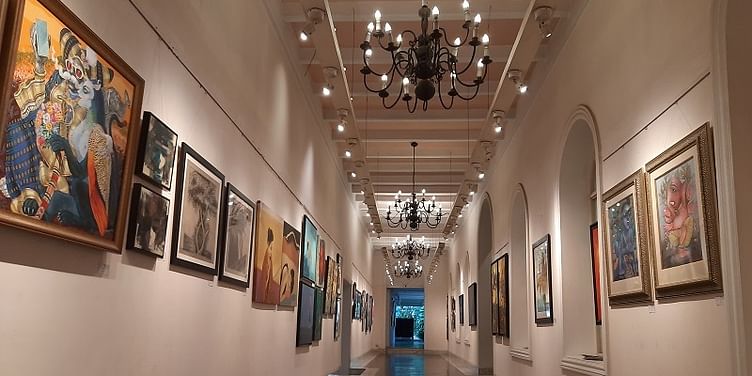 In this two-part photo essay, we feature creative works from the exhibition themed ‘Hope with Unity.’ Here are some pictorial highlights and curator insights – enjoy!

Being held this weekend in the Art Corridor at Taj West End in Bengaluru, the exhibition titled Kala for Vidya is a fundraising show for children’s education. It is organised by the Rotary Club of Bangalore, and curated by artist-curator MG Doddamani.

The artworks are priced from Rs 25,000 to Rs 6.5 lakh. See our coverage of Doddamani’s earlier Oorja exhibitions held in 2020 and 2018, with a special online edition called Unbound Oorja hosted online during the pandemic.

“The most important thing to me is the noble cause. Kala for Vidya is a fundraiser for educating the underprivileged children, and that to me was the biggest draw to curate the show,” Doddamani explains, in a chat with YourStory.

“As a curator, my aim was to bring all the artists and art lovers together to fulfil the hopeful dreams of those deprived children. It’s everyone’s responsibility to give back to society and help bring a positive change in any way we can,” he adds.

The exhibition features around 93 works on display across different genres, by 45 exceptional artists from across India. “I usually bring together a group of senior artists and promising artists, providing a platform where younger artists can get inspired by the seniors,” Doddamani says.

He specially chose nine senior artists to each create a piece of art in line with the theme of the show, Hope with Unity.

“The nine artworks were framed together as one artwork which was auctioned at the opening of the show,” he explains. “It was a unique idea which I came up with for this show, and it became the highlight of the show,” he adds.

“Be fearless in the pursuit of what sets your soul on fire! If you seek success, serve others,” Girish advises. By giving our time, skills and talents, we leave behind impact in lives and achievements.

Rotary Club of Bangalore runs its own school, Rotary Bangalore Vidyalaya. It has both Kannada and English medium, with 350 students from LKG to tenth standard. Rotary Club also supports over 40 government schools in villages around Bengaluru, and provides scholarship for B.Ed. students.

“Overall, I am very pleased that the show started off well, with paintings getting sold and the footfall was just overwhelming. I hope the trend continues for the rest of the duration of the exhibition,” Dodammani says.

“I request everyone not to miss this show. The collection will leave you with an outstanding, soul fulfilling experience,” he signs off.

Now, what have you done today to pause in your busy schedule and find new avenues to explore your creative core?