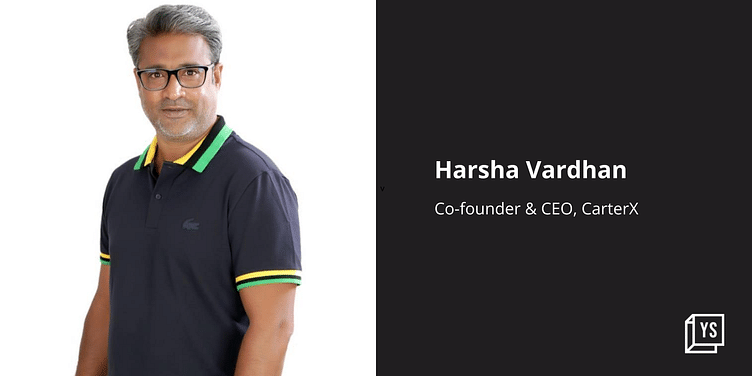 Started in 2017, CarterX serves as a door-to-destination airport luggage logistics solution provider, and has collaborated with major airlines including Indigo, Spicejet, AirAsia, and Vistara.

Nothing makes the passage of time feel slower than waiting at the airport baggage belt. Earlier this year, domestic and international passengers arriving at Chennai airport were forced to wait for more than an hour to claim their baggage. According to a study on Statista, transfer mishandling and loading failure were the biggest reasons behind delayed bags in the aviation industry.

With India expected to overtake China and the United States as the world's third-largest air passenger market by 2030, the problem is only going to get worse. This calls for the need for luggage services to aid passengers.

“Airport luggage transfer assistance is a significant new market in India. There is a lot of potential and scope, especially going by the new wave travel trends post-pandemic and newer airports coming up across India,” says ﻿CarterX﻿ Co-founder and CEO Harsha Vardhan who comes with a two-decade experience in retail, hospitality, construction, and logistics sectors.

Co-founded with Ramya Reddy, who comes with a 14-year experience in software, construction and investing, CarterX is a tech-enabled baggage assistance startup catering to air travellers across India. It offers an array of services for passengers such as assistance at the airport and pick-and-drop baggage services from the doorstep to the airport or vice versa.

“The service helps reduce passenger anxiety—be it for the long walks to enter/exit the airport, identifying the counters, queues at check-in counters, or congestion at baggage belts. We are currently a fully digital service operational at all terminals in Delhi, Mumbai, Bengaluru, and Hyderabad, and are soon going to commence services at Chennai and Kolkata,” Harsha tells YourStory.

Started in 2017, the Bengaluru airport provided the much-needed training wheels for CarterX before going to the market in 2018.

“There are multiple regulations that need to be fulfilled such as security clearances for services to be provided at the airport premises. We initiated these processes at the Bengaluru airport, and the product and internal processes were tested. Since we need to maintain perfect timelines to deliver the baggage at the airport, we had to test multiple routes at different times of the day to understand the traffic situation,” he says.

“Baggage is swiftly picked up and securely transported from the first mile to the last mile, with provisions for notification and tracking. One can book, move, and track their luggage online. It is stored ahead of time in our secure warehouses at each of the airports, allowing passengers in the post-pandemic era to travel light and stress-free, without the added weight and bustle,” Harsha says.

CarterX carts luggage of nearly any shape or size. It offers a 24x7 slot-based service for pick-up and delivery. Its other services include tamper-evident packing, complimentary insurance, 24x7 support, and free cancellation.

The startup has collaborated with major airlines including Indigo, Spicejet, AirAsia, and Vistara for baggage and airport assistance for their flyers through a single point of access provided by CarterX.

“We are currently a team of 34 operating at four airports as a 24x7 service. At the moment, we are a lean team of well-trained ground forces but our numbers are bound to increase with expansion,” says Harsha—an MBA graduate from the University of Madras who worked with Sangeeta Mobiles and Appcreche Business Solutions before co-founding CarterX.

CarterX was bootstrapped with an undisclosed amount for the first two airports—Bengaluru and Hyderabad—and has secured two rounds of undisclosed funding in 2019 and 2021 through Mumbai Angels Network and Venture Catalysts, respectively. The investment helped the company to expand its services to more airports and have synergies with leading airlines in India.

“We are in the middle of raising funds for the Pre-Series A round for an undisclosed amount, with participation from our existing investors VCATS and Mumbai Angels (MA),” Harsha says.

CarterX caters to both corporates and direct customers. It employs both B2C and B2B2C models of revenue and is looking to combine them to offer more with its one-access subscriptions across multiple airports. The subscriptions for corporate employees will be priced at Rs 1,999 to Rs 3,799.

“Our rates for consumers begin from Rs 599, and the prices are based on the number of bags combined with local services or distance-based outstation services,” comments Harsha. The price can go up to Rs 6,279 for outstation services. So far, CarterX has delivered 200,000 orders.

CarterX’s products are not only available on its website, but can also be obtained through airline portals as well as travel agencies.

“Due to the pandemic, the last couple of years have been difficult for our business. But, we are seeing a steady growth in traction and revenues over the past three quarters. We look forward to achieving the revenue of Rs 6 crore for FY 22-33,” he highlights.

As per the Directorate General of Civil Aviation (DGCA), the Indian air travel market is poised to be the third-largest civil aviation market by 2024. The industry is expected to grow at about 8-10% YoY, with the government looking to open more airports.

CarterX plans to take its services further to five more airports by 2023, and expand its presence to 15 airports over the next five years.

“We wish to capture about 33% of the market share over the next five years when it comes to passenger baggage transport service. There are fragmented service providers (such as porter services) at some airports offering a portion of the service we offer. International aviation services players such as AirPortr based in the UK and DUBZ based in Dubai, to name a few, offer similar services,” Harsha says.

CarterX says it is seeking collaborations with international players to expand its user base, and plans to roll out its first international service soon.