With its fleet of electric vehicles, can BluSmart solve commuting woes? 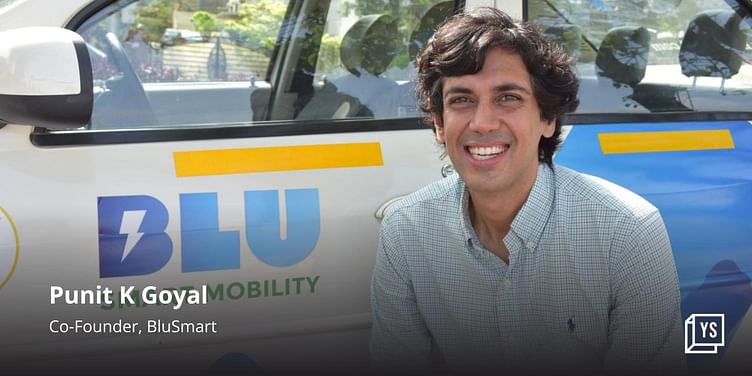 Instead of operating like a ride aggregator, BluSmart leases, owns, and operates EVs, thus removing the burden of asset ownership from drivers. The startup's ride-hailing service is available in Delhi-NCR and Bengaluru.

There are several reasons why there is a need for disruption in the ride-hailing segment—lack of rides, long waiting time, rides with surge pricing, drivers denying digital modes of payment… It is in response to these woes that the startup BluSmart was created, with its own fleet of electric vehicles (EVs).

“In recent years, the number of rides, the waiting time for the rides, and the price of the rides have been increasing. To top it, most of these are ICE vehicles. It is no secret that the carbon emissions and pollution levels across the world have been increasing. The vehicle emissions will keep increasing; the only way to reduce and stop that is to have an EV fleet,” says Punit Goyal, Co-founder, ﻿BluSmart﻿. “So we decided to bring about a shift in the market and introduce a newer mode of transport,” he says.

Punit Goyal and Anmol Singh Jaggi, founders of BluSmart, had previously founded startups in the B2B segment. Anmol is CEO Gensol Group and BluSmart and Cofounder at BluSmart.

After completing 2 million trips with over 2,200 cabs in Delhi-NCR, BluSmart recently launched its operations in Bengaluru. The company had started out with 70 EVs in Delhi-NCR in 2019. It currently has over 3,000 cabs across Bengaluru and Delhi.

BluSmart, which has raised $75 million until now, is now raising $250 million in a Series B round.

How the company operates

How is BluSmart’s ride-hailing app different from the others? According to Punit, BluSmart doesn’t work like a ride aggregator; he says it follows a full stack approach—the startup leases EVs from leading manufacturers such as Tata and Mahindra, owns the EVs, and operates them. The company has complete ownership and operating rights over the vehicles and hires the drivers, he says.

Zero cancellations, no surge fee, and on-time rides are the other features that the company is promising to subscribers. On the carbon footprint front, Punit says BluSmart has saved over 8,000 metric tonnes of CO2 with its EV fleet.

Apart from tackling the concerns of customers, the startup is also addressing the challenges that drivers face. The company founder says the startup is creating an “inclusive, equitable economic opportunity: wherein drivers don’t have to worry about asset ownership.

“Drivers essentially make much more money on the BluSmart platform. In the case of Ola and Uber, when drivers are micro entrepreneurs and they own a depreciating asset, they incur fuel costs, EMI, rent, or payments as commission. The driver ends up saving about Rs 450 on a bad day. And on a good day Rs 550,” explains Punit.

“We generate rides on the BluSmart app; we allocate rides to the driver partner, then we match a particular job with a customer and complete the ride. We take complete accountability and responsibility for each ride that we do here. Ola and Uber are a matching platform. They match a customer with a driver and the driver with the customer. If the matching happens, then they charge a commission of 25% on the completion of the ride, as a brokerage commission. A driver on the BluSmart platform can essentially make anywhere between Rs 20,000 to Rs 24,000 on a monthly basis,” says Punit.

BluSmart drivers have to pick up the vehicles from the designated BluSmart charging/parking stations.

“When you remove the burden from the driver, their behaviour and model changes automatically to help both the customer and the driver,” says Punit.

According to Blume Primer Report 2022, the company has dedicated charging hubs, leased vehicles, and an easy-to-use app. However, the small fleet size is of concern, as the availability and frequency of BluSmart rides aren’t high as of now. Punit explains that, as its fleet size expands, these challenges will be overcome.

Currently, the startup has deployed a few cabs in Bengaluru. It is looking to have 25,000 to 30,000 cabs in the city by the end of next year. It has signed an agreement with Tata Motors to deliver over 10,000 XPRES T EVs.

Vinod Murali, Managing Partner, Alteria Capital, a venture debt fund that has invested in BluSmart says, “While they are still growing, a lot of the newer age ride-hailing platforms are finding the niche of audience and have growing popularity across users. People want convenience and these apps provide them this that the larger incumbents are failing at.”

Experts say that, given the combination of a larger market share and a significantly lower cost structure, EV mobility providers will be able to compete with incumbent aggregators like Ola and Uber. In India, mYn and drife are BluSmart’s competitors.

Vidhya Shankar, a senior mentor and analyst, says, “(For) the sheer number of people today in need of a good public transport system, we need all kinds of ride hailing services, whether it is autos, bikes, cars, electric vehicles etc. This is especially true for a city like Bengaluru, where the commute time seems to be increasing. Just from a mobility perspective, there is a need for cleaner, affordable, and on-time public transport. The market clearly is there.”

According to Vidhya Shankar, the second wave of disruption is happening in the cab aggregator market globally. He refers to the DIEY app in New York, which is focussed on Manhattan and is 30% cheaper than UBer. “The algorithm has figured out most-used timings and locations. They bring in newer vehicles into the market. In India, the capacity and volume of vehicles is significantly high, giving room for more players to enter the market.”

To cater to this market demand, BluSmart has an ambitious goal of having over 1,00,000 vehicles by 2025 in the country.

(The story has been updated with new funding details and an infographic.)