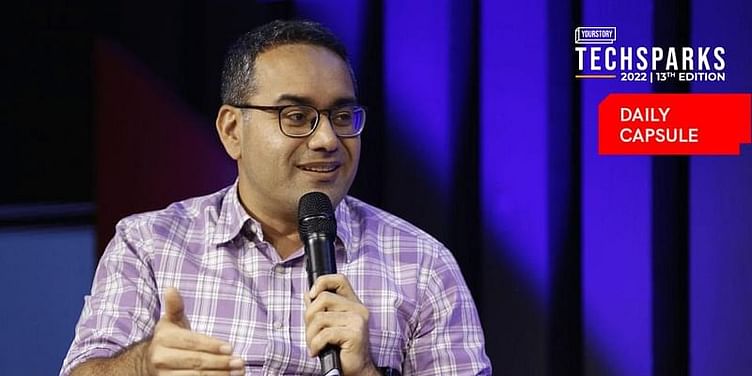 Day two at TechSparks 2022 was as eventful as it was promised. Here's a look back of today's lineup from the startup ecosystem, including the likes of Byju Raveendran, Kunal Bahl, Vani Kola, Kabeer Biswas, and more.

The second day of India’s most influential startup-tech conference–TechSparks 2022—began with a no-holds-barred conversation with Byju Raveendran on various controversial topics surrounding the eponymous edtech firm he heads.

We had Kalaari Capital founder Vani Kola discuss the potential pitfalls startups may face on the path to IPO, and the mantra for scaling up.

But, as they say, the best is kept for the last!

After two power-packed days, Day 3 will see Chief Guest Nirmala Sitharaman, Union Minister of Finance and Corporate Affairs, in a fireside chat with Shradha Sharma, Founder and CEO of YourStory. This is the second time that the Finance Minister will be taking the stage at TechSparks.

There are also sessions with Karnataka Chief Minister Basavaraj Bommai and Health Minister Dr K Sudhakar who will talk about Karnataka’s achievements as well as the state’s tech agenda for the coming years.

We also have Sequoia Capital Managing Director Shailendra Singh diving deep into the ongoing funding winter, while ﻿Zomato﻿ Founder and CEO Deepinder Goyal will share his insights on what it takes to run a successful food delivery business.

ICYMI: Video game company Atari has turned 50, and the company has released an anniversary-special pack of more than 90 games. Nostalgia abound!

Here’s your trivia for today: What is the oldest iPhone still in production?

Byju Raveendran is unfazed about his company's losses in the previous financial year and is confident that his edtech company will pull it back in FY 2021-22. The edtech company ﻿﻿BYJU'S﻿﻿ booked a staggering loss of Rs 4,588 crore in the latest financial year. But Byju expects revenue growth of 3X and losses to be halved in the 2021-22 financial year.

What is the oldest iPhone still in production?