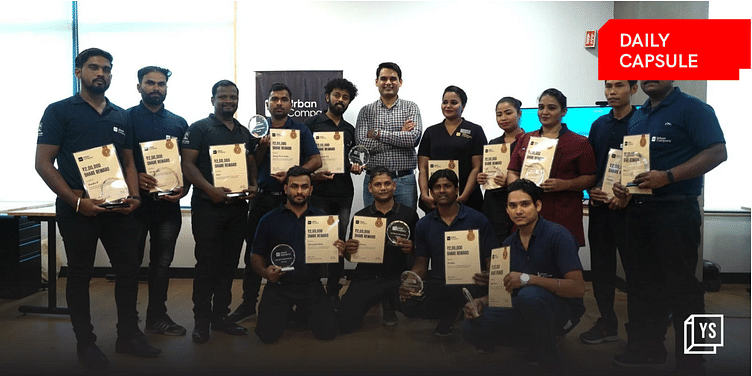 Seven partners, who were part of the first cohort of stock recipients in March, received it again for the second time, due to their consistently high performance.

For the fifth consecutive session, domestic benchmark indices ended in the green on Monday with both Sensex and Nifty50 hitting new highs.

One of the key reasons for this sustained rally is an increased buying interest, especially from foreign institutional investors that have put around $4 billion into the markets.

Meanwhile, ﻿BharatPe﻿ is back in the news as four key executives resigned from the company. CTO Vijay Aggarwal, CPO for lending and consumer products Rajat Jain, PostPe head Nehul Malhotra, and VP of Tech Geetanshu Singla have quit the firm.

ICYMI: Have you ever wondered how life would be if we had access to limitless green energy?

Here’s your trivia for today: How much is the biggest fine levied under the EU’s GDPR laws to date?

Urban Company awarded company stock options worth Rs 5.2 crore to around 500 partners across India under its Partner Stock Option Plan (PSOP) that was announced in March.

﻿TMRW﻿, the D2C-focused entity of Aditya Birla Group, has acquired majority stakes in eight brands in the fashion category. The group is expected to invest a cumulative amount of Rs 289 crore for the acquisitions according to filings with markets regulator BSE.

Accel has announced the second cohort for its Accel Atoms programme for pre-seed and seed-stage companies. Unlike the first cohort of 14 Indian startups, the new cohort has five companies from the US, Singapore, and Indonesia, apart from five Indian startups.

How much is the biggest fine levied under the EU’s GDPR laws to date?