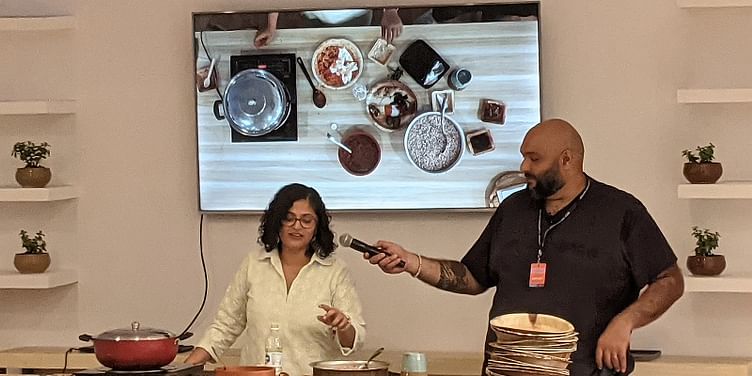 From this multi-disciplinary art festival in Goa, we feature more creative works and curator tips on art appreciation and careers.

The fifth edition of the acclaimed Serendipity Arts Festival (SAF) in Goa is wrapping up this week. See our earlier photo essays on the 2022 and 2019 editions here.

In this photo essay, we feature more artworks from the venues across the city, along with curator perspectives on festival highlights, art appreciation, and success factors for the creator community.

“This time around, there is amazing dance fare,” says curator Geeta Chandran, in a chat with YourStory. This includes Bharat and Sharat Prabhat’s 18 Days on the Kurukshetra war, Madhavi Mudgal’s Odissi dance in tandem with Gyan Dev’s lighting, and Santosh Nair’s Game of Dice.

Geeta also highlights Anita Ratnam’s relook at the Andal legend in Nachiyar, and Neena Prasad’s Mohiniattam. “Dadi Pudumjee’s Rumiyana is a balm for our polarised times,” she adds.

Other exhibits include Fresco Totems (wall plaster with embellishments). “Stairway to Kashmir showcases three types of Kashmir crafts in a single large installation,” she adds.

“To spur innovative thinking and willingness to experiment is what makes the Serendipity Arts Festival so special. The artists push boundaries and have the courage to undertake the execution of unexplored ideas,” Anjana affirms.

“There are several culinary workshops this year that we are proud to present,” explains Prahlad Sukthankar, curator of the culinary arts section. They include creating the perfect bite using traditional and modern cooking techniques (by Chef Aniket Chatterjee), using locally farmed seaweed in food (Chef Pablo and Gabriella D'Cruz), and mixology (Arijit Bose).

“At the Art Park, Chef Avinash Martins presents Tribal Table, with traditional fare made from indigenous tribal ingredients of the land and cooked by the tribal community,” Prahlad adds.

Sculptor and crafts curator Sudarshan Shetty was involved in shows titled Who is Asleep, Who is Awake. “It is an exploration into the liminal spaces between wakefulness and dream, between perceptions of fact and fiction, and individual representations of both,” he describes.

It provokes a number of questions: What is the relationship between fiction and imagination? What are we left with in an experience of fiction? Does it allow for us an interpretative space for imagination?

The curators also offer a number of suggestions on how art and crafts appreciation can be improved in India.

“Crafts appreciation can be increased by awareness. through showcases at such festivals where one is able to touch a large audience. People should be educated about the value of the hand-made,” Anjana Somany suggests.

“Crafts require a high level of skillset and the remuneration should be in proportion to the effort and skill,” she adds, advising people not to expect crafts to be inexpensive.

“The issue of art appreciation needs a longer and deeper engagement at all levels,” Sudarshan Shetty says. Artists should begin by asking who they are trying to address with their work, and who is their audience.

For crafts curator Anjana Somany, success would be in rekindling audience sensibilities. “Success would come from inspiring people to choose everyday sustainable materials, demonstrating that crafts are not mere souvenirs, and creating linkages between sensitised practitioners and the public at large,” she explains.

“Illuminating ways in which we can create beautiful, functional, and sustainable environments today through sensitive collaborations between designers and traditional artisans would also constitute success,” she adds.

“Success to me would mean if the performers and their performances are able to touch a chord in the hearts of their audiences, and create meaningful memories,” dance curator Geeta Chandran says.

She also wants audiences coming back to theatres to watch live shows. She asks: “That’s the essence of ‘performance’ isn’t it?”

The curators wrap up the interactions with messages to the audience and tips for aspiring artists.

“The poet AK Ramanujam wrote: “If you wish to be safe in love, court a mermaid. She's single-thighed.” Similarly, if you are looking for safe careers, then the arts are not for you,” dance curator Geeta Chandran explains.

“The arts are unpredictable, tiring, they wring both your body and soul. Yet, if you stay on, the arts can give you the highest of highs ever possible in human life. And that is the power of the arts,” Geeta enthuses. She urges: “Find that spirit. Get burnt!”

Crafts curator Sudarshan Shetty quips: “More than a message, I have a question – is it possible to be free anymore?”

“It is the best time to be in the food space today. I would urge aspiring food entrepreneurs to spend more time on research and acquire as much knowledge and exposure through reading, practicing their craft and travelling,” advises culinary arts curator Prahlad Sukthankar.

“Do not focus on becoming an Instagram chef, or run after fame, rather focus on honing your ability and your craft. While doing this, remember to take into consideration sustainability and preserving our biodiversity,” he adds.

“India has a very sophisticated culinary culture, but somewhere in the recent past, restaurants got complacent with churning out the same old popular recipes of the past, all in the name of ‘authentic’ desi cuisine,” Prahlad observes.

There is more to Indian culinary culture than butter chicken, tandoori, vindaloo, xacuti, and cafreal. “But things are changing for the better. The pandemic forced chefs to look inwards. Renewed focus on regional and indigenous cuisines and ingredients is on the rise,” he affirms.

“Chefs are getting more original with their flavours, using traditional and modern cooking techniques. It is truly wonderful to see Goa becoming a culinary hub of India with incredible talent from across the world who have made Goa their home today,” he enthuses.

“It is time to take India to the world and earn its rightful place as the global leader in culinary arts. It is up to this generation to set the right example for posterity,” Prahlad signs off, on an inspiring note.