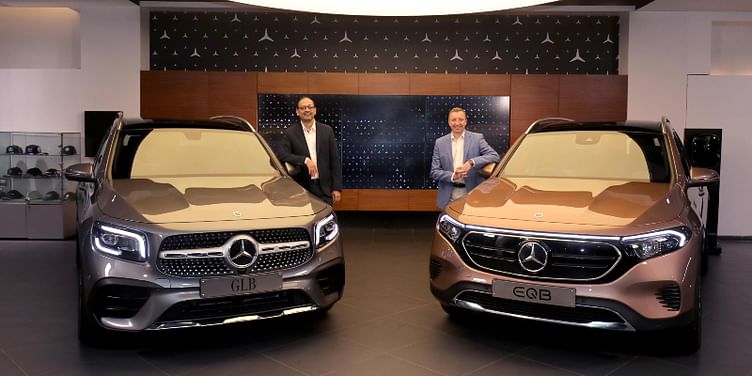 The all-new Mercedes Benz GLB sits in between GLA and GLC in the company’s lineup whereas the EQB is its all-electric cousin.

It’s not often that a manufacturer launches two new models on the same day. But ﻿Mercedes-Benz﻿ has done that, launching two new offerings for the Indian market– GLB and its all-electric derivative EQB.

GLB is priced between Rs 63.8 lakh and Rs 69.8 lakh, whereas the all-electric EQB is being offered at Rs 74.5 lakh (all prices ex-showroom). Both cars are being brought to the country as fully imported models under the CBU (Completely Built-up Unit) route, and hence, carry steep price tags.

Pre-bookings for the new SUVs opened last month, and customers can place orders by paying a token amount of Rs 1.5 lakh.

The GLB is offered in three variants– 220d 4Matic, 220d and 200, whereas the EQB is available in a single fully-loaded 300 4Matic trim. The SUVs are the smallest seven-seat models in the luxury car segment.

GLB and EQB aren’t very large SUVs but their boxy silhouette and upright stance, complemented by a muscular profile, help enhance their footprint. The internal combustion engine (ICE)-powered GLB gets a more traditional face, featuring a chrome-studded grille with 3D inserts and a signature three-pointed star at the centre.

The grille is flanked by rectangular LED headlamps integrated with LED DRLs. The side profile remains clean and understated while the rear end is dominated by a flat tailgate featuring wraparound LED taillamps and an integrated roof spoiler along with a chunky rear bumper housing twin exhaust pipes and a chrome-embellished diffuser. Thanks to its tall stance, GLB gives the impression of a ‘Mini GLS’.

The EQB, on the other hand, sports a similar silhouette and boxy profile as its ICE-powered sibling but with some noticeable aberrations. The electric SUV receives EV-specific design touches such as a sealed-off front grille, an LED DRL strip connecting the headlights, aero-specific alloys, and connected LED taillamps.

The cabin of GLB is marginally smaller than the GLC, which has a slightly longer wheelbase of 2,873mm as compared to 2,829mm in the former. That said, the interior layout in GLB is very much similar to the ones seen in GLC and GLA. The most prominent highlight is a twin-screen setup on the dashboard—a 10.25-inch touchscreen infotainment display and a 10.1-inch digital driver’s display.

In terms of safety, GLB is equipped with multiple airbags, electronic stability control, and ADAS (Advanced Driver Assistance System). The list of features in EQB remains the same as its fossil-fueled sibling. Boot space in GLB with all three rows up is limited to 150 litres, which can be extended to 570 litres by folding down the third-row seats. In EQB, the boot space is 20 litres more than in GLB.

Transmission duties are carried out by a seven-speed DCT automatic gearbox in the petrol variant and an eight-speed DCT unit in the diesel variants. As for performance, the GLB 200 sprints from 0 to 100 kmph in 7.7 seconds whereas the all-wheel-drive 220d variant is tad quicker, achieving the same in 7.6 seconds. The petrol-powered GLB clocks 0-100 kmph in 9.1 seconds.

Coming to EQB, the electric SUV is powered by twin motors, one on each axle, that draw energy from a 66.5 kWh unit battery pack. The powertrain delivers a peak output of 225 bhp and 390 Nm of torque and claims a WLTP-certified range of 423 km. The SUV can sprint to 100 kmph from a standstill in 8.0 seconds.