From Hermoine Granger to Jane Eyre: 10 women in fiction we absolutely adore 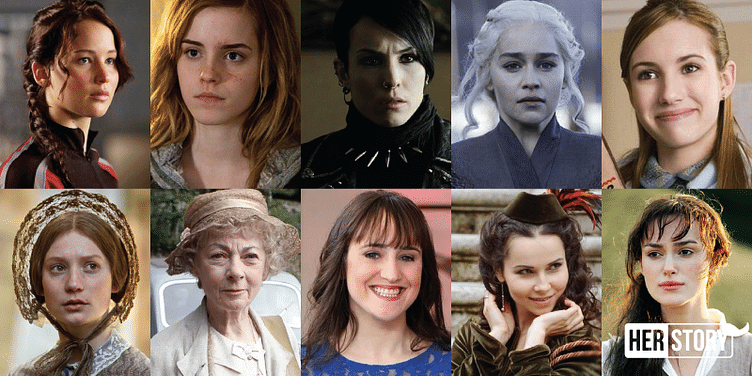 They’re sassy, beautiful, confident, brave, gutsy, and of course, feisty… We profile some of our favourite women in fiction…

No list of feisty heroines can possibly be complete without the spunky Katniss Everdeen! The protagonist of the bestselling Hunger Games series, Everdeen wowed readers everywhere when she took the place of her 11-year-old sister, Prim, to fight in the dreaded 74th Hunger Games. With her incredible skills with the bow and arrow, her keen wit and tough personality, this 16-year-old is a force to reckon with. Logical, stubborn, and delightfully blunt, Katniss breaks away from the emotional heroine we are all so very used to reading about! This is a woman who tells it like she sees it, and we can’t help but love her for it!

Favourite quote: "I'm not going anywhere. I'm going to stay here and cause all kinds of trouble."

The female lead in the Harry Potter series captured hearts everywhere from the minute she stepped into the Hogwarts Express and started gushing about her love for books. She may have started out as a bit of a know-it-all, but Hermione Granger evolved into a bright, brave, and fiercely loyal best friend. She’s not afraid to be who she is, even if it makes her completely unpopular and her careful, rule-abiding ways make her all the more endearing. This striking lead makes us want to embrace our inner nerd!

Favourite quote: "Me? Books! And cleverness! There are more important things in life like friendship and bravery!”

Fierce, intelligent, unapologetic, and bold, few characters are as intriguing as the striking Lisbeth Salander, the protagonist of the Millennium Trilogy. A computer hacker with a photographic memory, Salander’s skills make her an unlikely companion to journalist Mikael Blonkvist as they strive to solve a mysterious disappearance. Her emotionally unstable and unsocial personality makes her intriguing and irresistible, as do her morals and never-say-die attitude. Socially awkward, shockingly independent, and utterly unpredictable, Lisbeth Salander not only complements the book, she is the book.

Favourite quote: “Everyone has secrets.”

A key player in A Song of Ice and Fire, Daenerys Targaryen holds her own in the terrifying world of wars, castles, knights, and dragons. Although her house has been decimated over time, this young beauty managed to rise through the ranks rather quickly. Her keen battle wit, harsh sense of justice, and strong moral compass make her the ultimate leader - to be both feared and loved. Also called the ‘mother of dragons’ Daenerys knows exactly what she wants and is not afraid to go after it. And hey! Any woman who can inspire an entire army is fine by us! Ignore the show, we tell you!

Favourite quote: "If I look back, I am lost."

Having sold more than 80 million copies worldwide, been translated to over 45 languages, and having inspired five films, two television shows and a number of popular video games, Nancy Drew has long since proved that she is not a character to be ignored. Although her personality does evolve with different books, Nancy is beloved because of her innate ability to solve even the most complex of crimes, all the time remaining dignified, immaculate, independent, and bold. Widely considered a phenomenon, Nancy Drew managed draw readers in, in a way that baffled most publishers. With her knack of piecing together every puzzle, ambitious and driven personality and trademark strawberry-blonde hair, this is a lead that will not be forgotten anytime soon.

Favourite quote: “I just know that any time I undertake a case, I'm apt to run into some kind of a trap.”

She was one of fiction’s earliest representations of a passionate, complex, independent character who brooked ‘no nonsense’! Charlotte Bronte’s novel about a shy, quiet governess who becomes a tutor in a rich house and falls in love with its rich and mysterious master is one of the greatest classics of English literature. The portrayal of the female protagonist was way ahead of its time, perhaps even one of fiction’s early feminists! Over and over, Jane’s put into situations where she’s too young, too poor, or too powerless to win, but she has to try anyway. She always relies on her self-confidence and strength to get back on her feet and that makes her one of our top heroines to emulate!

Famous quote: “I am no bird; and no net ensnares me: I am a free human being with an independent will.”

In the age of guns, technology, and complex twists and turns, dear Miss Marple still foxes the newbie reader with her sharp intellect and gossiping ways. Agatha Christie brought Miss Marple to life in The Thirteen Problems (1927), serialised in the Sketch Magazine. She was an instant success, an understated character from rural picturesque England, and as Christie put it, ‘fussy and spinsterish’! From her small house in the village of St Mary Mead, she observes every aspect of human nature, because, ‘nothing is ever as it seems’! Christie went on to feature her in more than 15 novels. This old lady whose powers of deduction hid behind her three chief joys in life – knitting, gardening and gossip - still endures and endears!

Famous quote: “Everybody is very much alike, really. But fortunately, perhaps, they don't realise it.

If you haven’t gotten through childhood without Roald Dahl, you’ve simply missed some of the most loveable characters of all time. One of the greatest story-tellers of all time, Dahl her takes us through the life of a little girl Matilda, the challenges she faces in her life and her extra-ordinary skills. And who wouldn’t love to see a little girl take down all the bad guys – the classic ‘good over evil’ or something on those lines? This one’s all about a pint-sized girl who also happens to be a telekinetic genius. Unfortunately, most of the adults in her life don’t seem too keen letting that genius flourish. And what happens later is both fun and clap-worthy. If you haven’t read Matilda as a child, do not fret. You can read it now and like they say, there’s no time like the present!

Favourite quote: “I'm right and you're wrong, I'm big and you're small, and there's nothing you can do about it.”

The lead character in Margaret Mitchell’s Gone With The Wind, Scarlett O’Hara is a dark-haired, green-eyed girl from Georgia who struggles through the hardships of the Civil War and Reconstruction thereafter. She’s determined, feisty, and ready to achieve everything she desires by any means necessary. She embodies the combination of the old and the new and is a survivor who adapts wonderfully to the harsh and opportunistic world the South has become. She is manipulative, shrewd, and still practical in times of crisis. She tends to act on the spur of high emotions and so both her flaws and strengths are believable. She’s also a character one ‘would love to hate’! Totally unusual!

Favourite quote: "Tara. Home. I'll go home, and I'll think of some way to get him back. After all, tomorrow is another day"

The lead character in Jane Austen’s Pride and Prejudice, Elizabeth Bennet is the second child in a family of five daughters. Though the circumstances of the period she lives in may require her to seek a marriage of convenience for economic security, our heroine wishes to marry for love. She’s awesome, smart, funny, pretty, and loyal – so much so that you wish she was your BFF. She is a good judge of character and is not impressed by mere wealth or titles. Truly a woman after our own hearts!

Favourite quote: “There is a stubbornness about me that never can bear to be frightened at the will of others. My courage always rises at every attempt to intimidate me.”

Real women or fictional leaders? What the UN's appointment of Wonder Woman for empowerment of w...

How the author of the popular fiction book, Draupadi, bagged screen adaptation rights for yet a...