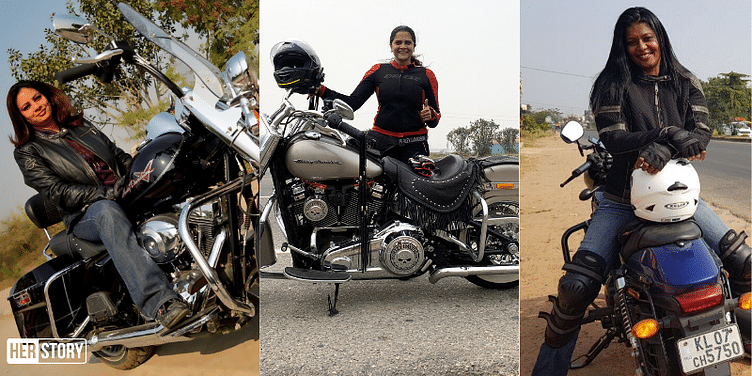 Ambika Sharma, Amanda Brown and Sony Mathew from the Ladies of Harley tell HerStory about their riding journeys and the community that is always a call away.

Riding on a bike through a picturesque landscape with the wind in your face gives you a sense of freedom that knows no bounds.

Through advertisements, movies, books, and TV series, bikes have been made synonymous with freedom and adventure. However, there is more to riding a bike than just freedom, especially for these women.

“Anything that you do that you actually like is some form of freedom and I think a motorcycle just makes that even more mobile,” says Ambika Sharma, a long-time Harley-Davidson rider.

Ambika is a member of the Ladies of Harley, a pan-India group of women Harley-Davidson riders. Women from the group tell HerStory about their motorbiking journeys, what it means to be a rider, challenges, accidents, and more importantly, the sisterhood of the biking community.

When Ambika was only 12 years old, her father taught her to ride a bike. As an army kid, she grew up in the army environment – a tomboy who never shied away from learning anything under the sun.

The two still share a strong passion for bikes and Ambika’s dad often rides pillion on her bike over weekends, chatting through Bluetooth-enabled helmets.

For Sony Mathew, a Kochi-based entrepreneur, the journey of riding a bike started all on her own sneaking away with her father’s scooter when he was not home. Then she started using her brother’s bike, her uncle’s bike, and finally to her friend’s bike when Sony was in college. Describing herself as an ‘uncontrolled rider’, Sony remembers being so obsessed with riding that no amount of falls, scraped knees or head bumps could stop her.

However, when an accident broke nearly half of the bones in her body, she had to stop riding for the sake of her parents. But not for long. At the age of 40, Sony returned to biking when an encounter with women riders reignited her passion. She gifted herself a Harley-Davidson without telling her family and kept it at the dealership for six months before finally telling them.

“I have had to fight for my right to do whatever I wanted. I come from a Malayali Christian family, and when a girl is born, it is decided that she will become a doctor or an engineer. That's why I studied to be a doctor. Luckily everything fell into place and I was able to get back to racing,” says Sony, who is a dental surgeon by education but runs a children’s events business.

On the other hand, Amanda Brown, AVP at Wizcraft, did not face a lot of challenges when it came to riding. She was in eighth grade when a boy in her neighbourhood taught her to ride a bike. However, it was only after she had an accident that severed her Achilles’ tendon and put her to rest for three months, she decided to buy a bike for herself.

With her son being the right age for him to be a pillion rider, she decided there was never a better time and bought a Harley-Davidson Iron 883. Apart from being a part of Ladies of Harley (LOH), she is also a member of Ladies of India, an all-women riders group who ride bikes above 650 cc.

The sisterhood of the travelling bikers

Harley-Davidson established its roots in India in 2009 and set up chapters for its riders. These chapters give riders an opportunity to meet and organise trips and rides, and create a biking culture. The Ladies of Harley is one of these chapters, exclusively for women who own Harleys.

Through social media groups and WhatsApp, women riders have built a tight knit community that is always a call away.

“If you get stuck anywhere on your ride, and you need to call another rider, it doesn't matter if it's nine o'clock at night or 3 am, someone will always be there to help,” says Ambika, the Founder of Pulp Strategy and Managing Director at Instappy, which is a cloud-based mobile app creation platform.

With chapters all over India, help is always available recounts Amanda. Her father was on a train from Mumbai to Bengaluru when he had a stroke. She received a call in the afternoon informing her that her father was in a railway hospital at Kurduwadi near Pune, a place she had never heard of.

She put out a post asking for help on the group and within 15 minutes, people were on their way to help her father. By the time she took a flight from Delhi to Pune, her group member had moved her father to Pune, admitted him in a hospital, assisted with tests while keeping her informed throughout.

“It’s an amazing group of people. People think of biking as a passion, as a mode of transportation, or as a club or cult symbol. It is a lot more than that. It goes beyond because the community is so close; people actually reach out and help each other without any strings attached,” she adds.

The groups are also a platform for knowledge-sharing as women reach out to each other for queries about bikes, spares, repairs, and more. Once you drop a post, there are thousands of responses to help you, says Sony.

For Sony who mostly prefers to ride solo, the group of women are a source of inspiration and encouragement to keep pushing and achieving more.

Meet Lani Zena Fernandez, a Puducherry-based biker who is revving up for an exciting career in motorsport

For the love of riding

Biking, for these women, is a means to different ends. Ambika rides to combine her love for travel and bikes. She says that travelling on a motorbike allows her to interact with different environments and people at her own pace. Every year, she picks one state and travels for 15 to 20 days, visiting heritage sites on her Harley- Davidson Road King. Later this year, she plans to explore Orissa.

Amanda has clocked over 45,000 kilometres on her Harley. In 2017, she rode from Gurugram to Kanyakumari to Rameswaram and onto Madurai, finishing the ride at Coimbatore. She frequently rides out to nearby trails such as Himachal Pradesh on weekends.

“I think the sense of just being with yourself and experiencing the world around you because you are enjoying is the kick of adrenaline. You get to connect with people, with nature, and with new places. A bike gives you a sense of freedom, which doesn’t compare to anything else in the world,” she says.

For Sony, it is not the long distances, but just the riding that brings her peace and calm. It doesn't matter what she is going through, everything disappears when she is on the bike.

“As soon as my feet are off the ground, I am in my own world,” she says. On weekends, she prefers to take night rides to either the borders of Kochi, stop at a tea stall, chat with the owner, and observe people at toll areas, and come back home.

She also runs an NGO Raising Our Voices to help underprivileged children with education and provides employment skills to women. Through her bike riding, she says that she teaches children to dream bigger and overcome gender barriers. She also helps women in her neighbourhood to learn to ride.

“The bike does not see gender. If like a bike, we can also become like that, the world will be better,” says Sony.