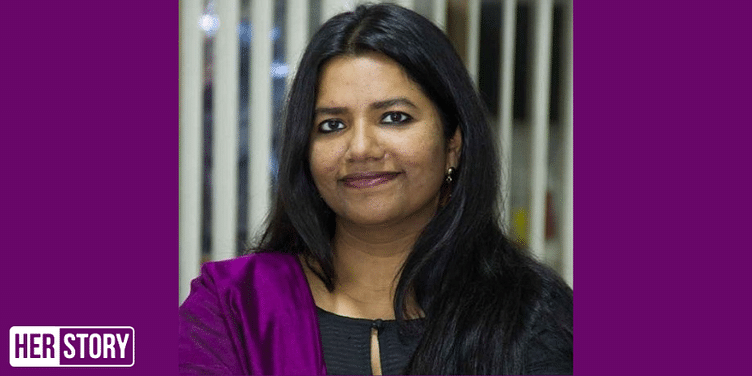 Among the many people who have inspired and influenced Surga Thilakan is her own Co-founder and IIM-A batchmate, Sreeraman Vaidyanathan. Together, the duo embarked on the path of entrepreneurship first with ﻿Istart﻿, a company that equipped entry-level sales and support staff with the ability to have better conversations with customers.

Over the next 10 years, they trained 20,000 sales representatives using technology-led interventions. This eventually morphed into an artificial intelligence (AI) and data science-led product used by corporate organisations to assist their inside sales engines. That is how ﻿SalesKen﻿was established in 2019.

“Sreeraman inspired me about creating something new, in forging one’s own path. I was also inspired a lot by Steve Jobs, Elon Musk, and what they said about building a business. Building a business is like eating glass while staring into an abyss,’ Elon Musk says and it can’t be truer,” Surga says.

The entrepreneur was raised in a South Indian family in suburban Mumbai. Both her parents worked in the government and had no business “connections”.

A gold medallist in her chartered accountancy exams, Surga began her entrepreneurial journey when she quit her job at Goldman Sachs in the US and came back to India with an idea to empower entry-level sales personnel to have effective conversations with customers.

She points out that sales is usually considered a “dark art”, where people with very high IQ are not necessarily able to sell well.

“It is not very well trainable in a classroom. It encompasses a number of aspects of human behaviour that are complex and hard to understand. Yet, it is the single largest job creator, employing millions of people worldwide. We wanted to bring science, particularly data science, into selling.

“We wanted to understand patterns on a number of dimensions - emotion, trust, sales playbooks, best rebuttals - and create a scientific way to foster human connections in a commercial context,” she says.

Surga explains, “Our conversational AI platform uses real-time insights and cues to help sales teams improve conversions across calls, webinars, presentations, and emails. The platform also allows them to gauge customer sentiment during a sales pitch and gives them unparalleled visibility into the performance of sales teams via qualitative analytics - revealing knowledge or skill gaps within their teams.”

It also claims to be the only conversational AI tool worldwide that not only diagnoses the problems sales representatives face in their calls, with analytics, but also fixes the problem through a wide range of cues that assist reps in real time during the call and help win more sales. What’s impressive is that it is able to deliver the cues in under a second of customer utterances across the entire range of the sales playbook.

The irony of toxic cleaning products led this woman entrepreneur to start a plant-based, eco-friendly alternative

According to Surga, Salesken handles over one million minutes of sales conversations every month and assists over a 1,000 salespeople every day.

“In August alone, more than 200,000 such cues were used by sales representatives. There is a visible surge in sales numbers that customers have observed using the insights,” she reveals.

In India, Salesken's marquee customers largely come from three segments - education, finance, and software. With the help of a mobile app, Salesken has been able to help customers continue selling during the lockdown, as not every company can provide its salespeople with a laptop and desk phone to work from home.

Its target audience is sales teams anywhere in the world selling over a device - phone or video. The startup is currently focused on India and the US market.

Salesken follows a SaaS model and charges customers on a per user, per month basis. It recently raised a $8 million Series A funding round led by Sequoia Capital.

Surga says what works in Salesken’s favour is that it does not have too many local competitors focused on conversational intelligence in the sales space.

“Globally, we compete with Gong.io and Chorus.ai. The moat is that we are embedded deeply into a company’s sales operating system and workflows. It is hard to get salespeople to change habits and processes, and this makes the product really sticky. We also have intelligence about what playbooks or strategies work in our customers’ sales pitch. This intelligence is built and refined over time and becomes a strong data moat for any competitor to replicate,” she says.

She adds that the company is growing at 200 percent year on year and is serving customers across edtech, banking, and SaaS companies.

COVID-19 has also meant more business as its analytics provides sales managers with deep insights on how the team is conducting sales conversations remotely from their homes.

She adds, “Our mobile app has enabled a distributed contact centre to be set up very quickly. You just have to download the Salesken app and get calling. Our real-time cueing has greatly assisted sales folks during live sales calls in the absence of team leaders or mentors on a calling floor.”

Their biggest challenge, however, has been to find good talent, especially in data science NLP roles.

“We want to expand into the US as that remains the largest and most mature market for a product like ours. We also need to strengthen our customer base in India. There is also an opportunity to tap more traditional industries like pharmaceuticals and logistics through our product, which we would like to in the future,” she says.