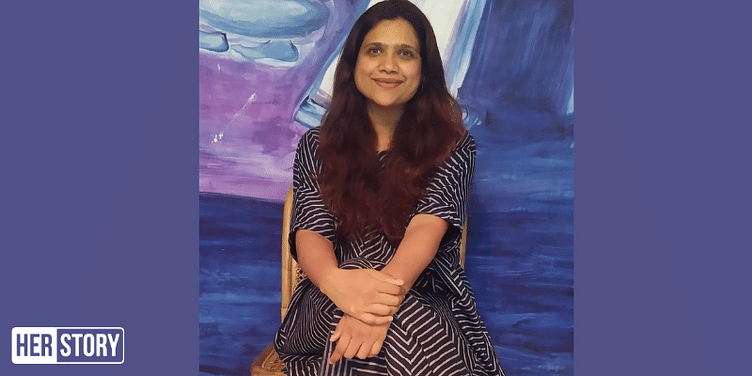 Pooja Rajput founded Chidiyaa to follow her passion for art and craft. The brand offers a range of sarees, blouses, kurtas as well as menswear.

Being a computer engineer with an MBA in marketing is a sure shot way to a corporate life and climbing the success ladder.

Pooja Rajput followed the same path before she decided to start ﻿Chidiyaa﻿, an apparel brand that arose from her passion for traditional art and craft.

However, Pooja believes there was no particular pain point for starting Chidiyaa in 2015, especially when the apparel business is a fairly crowded marketplace.

“Entrepreneurship for me merely came from a place of doing work I thoroughly enjoyed. I’ve always loved visiting bazaars and dastakars, and always visited small villages and explored the root of traditional handicrafts and techniques,” she says.

Workwear with an ethnic twist

During her corporate days, Pooja used to gravitate towards buying handcrafted apparel as workwear. She used to constantly be on the lookout for clothing that was minimal and unique, with a contemporary twist yet ethnic in its basic nature.

“Traditional is beautiful, and I have always preferred the understated, less-is-more look with a unique design language. This is the driving force behind Chidiyaa as well."

"We make clothing that is niche in terms of the motifs we use, the fabrics we procure, and the processes we follow. We use age-old techniques, but we are giving them a contemporary twist and placing them in the 21st century context. We’re playing with colours, silhouettes, weaves, and with printing itself and creating unique art that you can wear,” adds Pooja.

The brand offers a wide range of sarees, blouses, kurtas as well as menswear. The process, Pooja says, commences in the design office in Gurugram. These are then brought to life in the homes of weavers, artisans, and block printers from across the country.

Linens are sourced from a small village in West Bengal called Phulia; blocks are made in Ahmedabad, Gujarat; and the printing process unfolds in Ajrakhpur, Bhuj. The stitching is completed in Delhi and the final product is a plethora of arts, crafts, and techniques that our vibrant culture has to offer.

A niche of its own

Presently, Chidiyaa retails through an independent, online platform www.chidiyaa.com. The brand gained popularity when Pooja did a pop-up of Chidiyaa in Gurugram.

“This was the brand’s first physical interaction with consumers and the thought of that resulted in a sleepless night. The hall we were set up in was fairly big, and I just remember that after a point, it was just not big enough for all the people who wanted to know more, browse, and shop Chidiyaa. There was a such a long queue that I had to scuttle to find helping hands to set up two extra billing counters. This experience was an eye-opener for me - it showed me that Chidiyaa is truly loved and supported by many,” she says.

The brand targets an audience of women in Tier I and Tier II cities.

Chidiyaa is bootstrapped with Pooja’s savings and the founder ploughs back the profits towards building awareness and intrigue around traditional art. It also creates a handful of SKUs per garment and launches multiple styles every month.

Chidiyaa today boasts of over 190,000 followers on its social media channels and also has a loyal base of patrons and supporters in celebrities like Ratna Pathak, Kiran Rao, Maria Goretti, Smriti Irani, and others.

While there are a lot of brands in the ethnic wear space, Pooja says she doesn’t consider them competition.

“In the last four to five years, Chidiyaa has developed a niche of its own, taking up a space in the market that is uniquely ours. We have our own offering, a loyal customer base and an exclusive design language that is now recognisable at first glance. So, while we admire many brands in this space, we aren’t competing with them,” she says.

Whether it’s designing, working with weaves with artisans in West Bengal or the block printers in Bhuj, Gujarat, or shooting all the campaigns, Pooja is a hands-on founder.

She believes running her own business is an advantage as a woman entrepreneur as her “emotional quotient” gives her an edge to understand the needs of customers, vendors, artisans, and partners better.

COVID-19 has also impacted her business, specially in the offline segment. “While Chidiyaa’s main retail channel is online, at www.chidiyaa.com, we also used to do a lot of pop-ups, events, and exhibitions, which have all come to a stand-still. Our focus on digital has increased two fold, be it marketing, social media, or even retail. We’re constantly adding new collections, product categories and expanding our scope in terms of fabrics used and techniques employed,” she says.

The choices we make determine who we are

How Akshali Shah is giving her father’s 1,500cr milk business a modern makeover