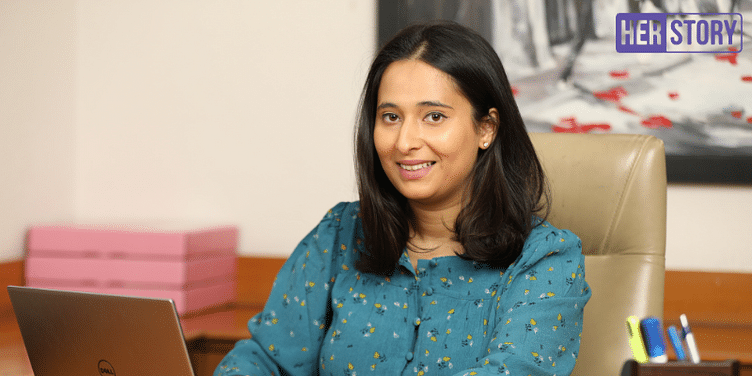 Based in Hyderabad, Hunar Online offers more than 30 skill-based courses and aims to help homemakers in India achieve financial independence.

The difference in opportunities for men and women and the consequent financial inequality became apparent to Nishtha Yogesh early in her life. What also became obvious was most women’s determination and willingness to work and earn.

When she was still in school, Nishtha used to intern as a receptionist at a creative design learning centre, where she saw many women come to learn and walk out with a “renewed sense of confidence and belief in themselves”.

“I thought how great it would be to have such a service across the country. I have always believed that education and technology are the two biggest equalisers and together, it could really level the playing field,” she tells HerStory.

Nearly a decade later, in 2016, while pursuing an MBA in entrepreneurship from Babson College in Boston, she started building a platform to offer skill-based courses. This would later become ﻿Hunar Online﻿.

Two years before this, she quit her job as a Chartered Accountant at KPMG in Hyderabad to start Project Prefix, an app for aspiring CA candidates.

Nishtha says, “There are over 200 million literate women in urban India out of which 148 million are not employed or studying. These numbers are staggering, and the factors causing this include family and household responsibilities, the lack of flexible work opportunities, cultural prejudices to women working in India, and the lack of flexible re-skilling learning opportunities. This is not a India versus Bharat problem, but is true for women from different income segments, from different geographic segments and socio-economic segments.”

She adds that most of them are homemakers whose lives are dedicated to performing unpaid care work, ensuring their family members are on the clock.

According to Delhi-based non-profit Initiative for What Works to Advance Women and Girls in the Economy (IWWAGE), unpaid work imposes cost in form of missed opportunities for education, skill acquisition or improvement, and public participation.

Overseeing the work from Boston, Nishtha focussed on building quality content for two years to design courses that will truly benefit its target audience — homemakers. The end goal, she says, is to help them become financially independent.

After completing a course, Hunar Online assists the women for two to three months to build their collection and market them through its My Boutique programme.

Starting up funds from friends and family, the startup formally launched its operations in May 2018 and claims to have trained more than 6,000 women (paid users).

With more than four lakh users experimenting with the app through free trials, the startup claims to be on track to achieve 20,000 paid users by the end of this financial year. Its mobile app has been downloaded more than 500,000 times.

The startup has teams of experienced faculty members to build curriculum, technicians to shoot the course content and to work on post-production work involving video editing and graphic designing.

The courses are certified by NSDC and approved by four-time National Award winning fashion designer Neeta Lulla, who has worked on more than 300 films in India.

Nishtha says every woman who has taken a course on Hunar has her own unique journeys and the way they engage with the platform increases her belief in the product.

The entrepreneur says homemakers are a unique audience and a lot of features are incorporated through their feedback. She adds, “They don't spend frivolously but only when they are sure and on brands they trust.”

Priced between Rs 3,000 and Rs 12,000, the course fee can be paid in two instalments. Most women do not prefer online payment as they would have to request their husbands or fathers.

To address this, the startup provided the option for cash payments while delivering a one-time starter kit. For example, a student opting for embroidery design will receive a basic stationery containing fabrics, needle set, motif designs, threads, and embroidery frame. However, they would need a device with internet connection to learn on Hunar Online.

Nishtha says they often have specific needs due to restrictions at home. “One woman from Visakhapatnam kept calling our sales team and said the kit could be only delivered between 2 and 3 pm on Thursday because it is the only hour she's alone at home,” she recalls.

The courses are self-paced pre-recorded videos, available in English, Hindi, and Telugu. The startup is working on facilitating more vernacular languages.

"The convenience of doing this from home — without having to go out, in your language, at any time that works for you — is really great for women who have a lot going on. Homemakers are one of the busiest people in our ecosystem," Nishtha adds.

She says there are no other entities providing similar services to this target audience in India, besides few organisations teaching creative courses through classroom education or government programmes.

“There is no platform designing high-quality creative courses that are purely online and offer video-based classes,” affirms Nishtha.

The entrepreneur says building confidence in homemakers to reskill themselves and trust Hunar Online was the most critical challenge. Most women who complete their courses have become entrepreneurs, and these stories encourage others to join.

Nishtha shares several examples, including Samiksha Tiwari, a government school teacher from the outskirts of Lucknow who earned a salary of Rs 15,000 to Rs 20,000 to run her family. After a Hunar course in fashion illustration, she now works with a local tailor to design garments and presented her first collection at a local fashion show earlier this year.

“An 18-year-old girl from outside Indore took three courses and has become the go-to person for all wedding-related garments,” narrates Nishtha.

Then, there is Indu, who got married and moved to Visakhapatnam after completing her education, was getting frustrated with her life in a new city with little opportunity. After a course in styling and garment creation, she now designs for local anchors and celebrities in the city.

After COVID-19 broke out in India, Nishtha says many Hunar women have gone on to supply masks to the frontline workers in their communities.

She says, "Homemakers are willing and driven. With the right opportunity and direction, they can do wonders. And they are a largely forgotten audience where not many are looking to reskill them.”

As an online platform, she says that Hunar Online is enjoying the edtech boom in the pandemic and saw 100 percent increase in revenue every two months since May 2020. However, the team’s internal operations was disrupted with a 180-degree shift to remote working.

Additionally, as the economy is reeling from the impacts of COVID-19, she says many women with genuine interest in reskilling are waiting until they have some clarity in their family’s financial stability.

While requests for cash-on-delivery (COD) service have reduced, the startup continues to offer the COD option through its third-party logistics vendors who ensure safety procedures.

Headquartered in Hyderabad, the women who are signing up for Hunar’s courses hail from 12 cities in India. Moving ahead, Nishtha hopes to increase the platform’s course offerings and presence across the country.

Speaking of Hunar’s long-term plan, she says, “I hope to make sure that every single homemaker has access to this opportunity. If I can pull this off, a large part of our country will become financially independent.”