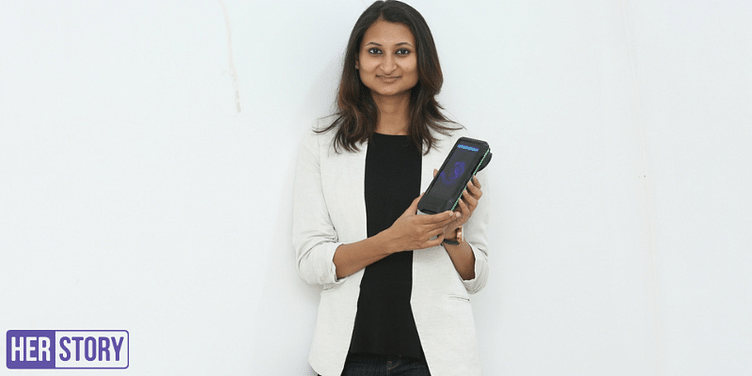 Geethanjali Radhakrishnan grew up in the Western Ghats as her father was a researcher in a tea research institute.

Born and raised in Munnar, Kerala, she pursued a bioengineering degree from the Sastra University, Thanjavur. Recently, Geethanjali completed her MBA from BITS Pilani. She worked as a researcher and software developer before founding ﻿Adiuvo﻿Diagnostics in 2015.

Explaining the pain point her startup is trying to address, Geethanjali says, “In the hills, access to healthcare is at least miles away. I always wanted to contribute towards early screening and disease diagnostics in low resource settings.”

She got introduced to Dr Aayush Gupta, an associate professor and dermatologist at Dr DY Patil Hospital Pune.

“We met a farmer from a remote village near Pune who was treated with antibiotics for a few years for a fungal infection. His wound became chronic, and he had visited DY Patil as a last resort. This helped me get insights into the global problem of acute, chronic, and traumatic wounds, where understanding infections early on is very important. There was a dire need for a rapid, affordable screening device to detect and classify both bacteria and fungus in wounds,” she says.

Geethanjali realised the need of the hour was a non-invasive and label-free diagnostics solution. With experts in optoelectronics as part of the team, she wanted to work on a screening device that aids in contactless imaging and the detection of bacteria. Thus, she established Adiuvo Diagnostics.

Adiuvo addresses the global problem of acute, chronic, and traumatic wounds, which affects over 420 million people around the world.

Geethanjali says the problem is more compounded in developing countries like India, where there is no established wound management protocol.

She elaborates, “About two-thirds of lower limb amputations are due to ulcerations on the foot that are not treated by predominantly rural poor working-age group, the annual burn incidences in India are six-seven million (four out of five are woman and children), 7-10 percent of hospitalised patients develop hospital-acquired skin infections in ICU wards, and secondary infection at the site of surgery is the third most reported nosocomial infection.”

It takes automated measurements in under two minutes when compared to the gold standard culture method, which takes three-seven days for a definitive result.

The platform has a wide range of applications — from antibiotic susceptibility testing to cancer screening.

Backed by mentors and experts

Geethanjali single-handedly works on project R&D, finance, and fundraising, and is backed by a team of mentors.

“With the right team and mentor support, I was able to handle many shortcomings. They came in with various expertise from embedded hardware, machine learning, optoelectronics, operations, to marketing experience at various stage of product development,” she says.

Her childhood friend John King, Aduivo’s lead product developer, was her first hire for the startup.

“The current method of infection management of different wounds requires a swab or tissue biopsy sent to the microbiology lab for definitive diagnostics, which requires a BSL-2 facility and trained manpower, and also takes two-seven days. Illuminate screens infections in real-time and classifies pathogens within two minutes, providing an evidence-based assessment,” Geethanjali adds.

Catering to both urban and rural settings

The startup caters to government hospitals, multi-speciality hospitals, and individual clinics. It offers various models that include outright purchase, capex model, and even installing the device on a pay-per-test model. The latter two models can cater to both rural and urban areas.

The entrepreneur declined to reveal details of initial investment, price of the product, and cost per test.

After commercialising its products, Adiuvo is seeing wound patients relying heavily on the device against culture test, who cannot afford a regular test. In fact, hospitals and clinics are also accepting the device widely where diagnostic labs are not nearby.

The startup was initially supported by Birac, Nidhi Prayas DST, and Villgro Grants during its early stages of product development. It is also supported by social impact investors Menterra Venture Funds and Lesing Artha Limited towards commercialisation, regulatory certifications, IP, and other R&D activities.

It is also part of the QDIC program (Qualcomm Design in India Challenge) and Geethanjali says that QDIC mentoring during various stages of hardware development using the Qualcomm chip has been useful.

Adiuvo used the lockdown period last year to work on parallel applications that can support companies working on COVID-19 solutions to support its runway.

“Our future plan is to promote and market the product, and make a significant contribution in early infection detection on wounds,” Geethanjali says.