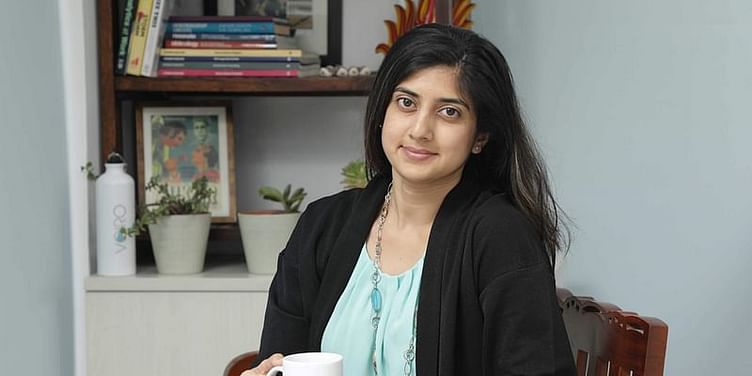 Kavita Shenoy donned many hats — as a mystery shopper, a prosthetic makeup artist, and a video editor — before she ventured into the world of advertising. At the heart of all this was her passion for media.

“From being unaware of where my interests lie in living with this deafening roar of passion, which gets the whole team and the firm on its feet, has been an unbelievable experience for me as an entrepreneur,” Kavita tells HerStory.

As a former advertising executive with Lowe Lintas and later with YouTube, she witnessed that several publishers struggled to use their network talent and resources.

During these 17 years, Kavita saw that media companies had a system of filling up the ad spots using referrals, and the publishers, too, found it difficult to effectively manage it.

Thus, she decided to tackle this underserved segment with new-age technologies.

The Bengaluru startup enables content companies to deliver high-quality work and helps them understand the “importance of the right perspective.” With several fast-growing OTT and video platforms in the market today, many content platforms need to understand how revenues can be generated.

In fact, publishers, too, were aware of this gap in the adtech space and how technology could help them change the way they work.

It is, therefore, common for content owners and aggregators to now look at non-TV platforms to generate reach and revenue.

Thus, Voiro partners with publishers and provides them with solutions to make internal revenue operations and associated data management smooth and scalable.

Kavita says Voiro had the first-mover advantage of sampling content over the internet. “When we started this company, we began with producing content to understand the pain points of content producers and get a deeper understanding of what goes on behind the scenes,” says Kavita.

Voiro automates the processes and different infrastructures in the publisher and OTT space and helps companies gear up to the ever-changing content world, with domain expertise that spans across the leading OTT players in the industry.

“All our solutions enable companies and publishers to produce high-quality work that is consistent with the goals of the company, and as always, RoI is the mantra that every business is built on,” adds Kavita.

While working as a media manager with YouTube, Kavita accompanied one of the partner managers to a local Bengaluru TV channel.

“Soon the ad space on YouTube got democratised, and the world of video changed forever,” she adds. While the TV industry was dying, the team pumped in resources and had faith that YouTube would enable them to make a mark in their field. This was the inception of Voiro.

Kavita had known Anand earlier, who also shared her passion for making a positive impact to solve challenges for customers. She says this problem-solving attitude is the ‘Holy Grail’ of the startup’s operations.

“Anand was an expert data scientist with limited experience in media, and he came along with me to understand the adtech world. We still talk to each other at least 10 times a day — there is so much to learn, do, and build,” Kavita says.

In March 2021, the startup had raised $1.8 million in a pre-Series A round led by Mela Ventures and early-stage VC fund and angel platform 1Crowd. 1Crowd had also invested in Voiro in a seed round in 2019.

Over the last six years, the platform has become the preferred revenue management partner in the media space, earning its spot in the core technology stack.

It has driven monetisation teams in key media companies and publishers, including marquee live events like the IPL, the Oscars, Bigg Boss, and Flipkart's Big Billion Day.

After completing her studies in economics at the University of Mumbai, Kavita started working with Lowe Lintas, where she managed some of the country’s largest consumer brands, including Google. She later joined Google’s YouTube team.

“Another milestone was working with a company that changed the face of advertising forever — Google. I led the launch of its in-country support of Doubleclick YouTube in India and replicated it in South East Asia,” she says.

Adding, “My job was to translate Google media platform policies through advocacy and governance frameworks to deliver compliant launches and programmes. The recognition of being singularly responsible for the IPL programme execution was a turning point for me.”

While working for large advertiser programmes for Google, Kavita realised that digital publishers were constantly playing catch up with technology. They were sitting on a mine of data and were probably using only 10 percent of it.

The team took its time to find the balance between leaning into their understanding of the problem statement and finding scalable solutions that had a razor-sharp focus and drove an uptick in revenue.

Another challenge was finding the right product-market fit as the adtech market is highly volatile. Kavita explains that the team had to stay ahead of the market and develop solutions that can truly make a difference to the media workflow.

“We relied on a bunch of advisers from the industry, family, and friends. We had to look at the bigger picture and figure out our goals. It was difficult to understand how to build and scale, especially when we were serving the largest OTT player in India. We had to consciously look into how the market worked and where we had to widen our horizons,” says Kavita.

Another major challenge was raising investment for the company. Kavita says there are several pros and cons to being a bootstrapped company or getting external investments.

“We had two options before us. Either we had to live on the edge and stay bootstrapped and constantly under pressure, or make a case with the investors in an environment which was not friendly to the adtech organisations. Raising funds is also a seal of approval for a startup as they are perceived to be on a growth trajectory,” says Kavita.

According to Dacast, overall video ads grew by 46 percent last year, with live content doubling in market share. In fact, consumer spending for streaming services is expected to reach nearly $17 billion in 2020.

After a decade in the PR industry, this woman entrepreneur launched a fintech advisory platform for women

“On a lighter note, I would like the Voiro brand to be seen as “the Ferrari of business intelligence,” says Kavita.

Advising women entrepreneurs, Kavita says, “When the chips are down, when you feel like giving up, and when you face anything that makes you want to stop, just breathe and jog on the spot!”

“This has served me well for over 17 years. Whatever the problem is, always think about the long game. Doesn’t matter if you’ve lost your promotion, job, people, faith, money, or everything that matters. Just jog on the spot and you will find a way out,” she adds.

“Ask for the raise, pay, or sabbatical that you have been looking forward to. We owe it to ourselves to be vocal about what we want and go after it. Be persistent, resilient, and don’t give up until you get your due,” she concludes.