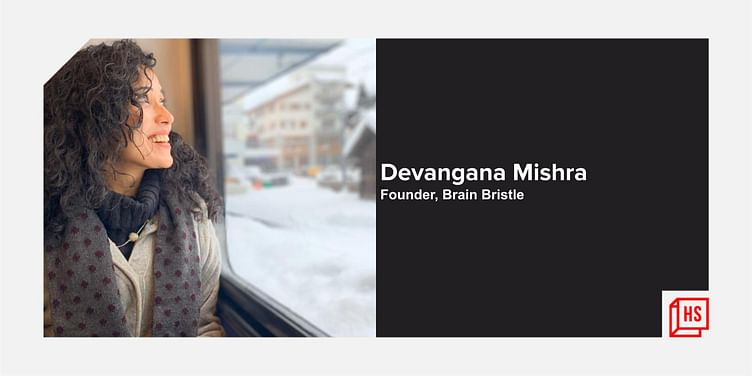 Devangana Mishra, CEO and Founder of Brain Bristle, works with children on the autism spectrum. In this conversation with HerStory, she shares her motivation, persistence, and how she made it her life’s mission to work with autistic children.

Devangana Mishra was 19 when she joined Vasant Valley School as a learning specialist. One day during the school assembly, she saw a boy named Sahil breaking down and starting to scream.

“The school administration handcuffed him and took him to a room where kids with special needs, or those who are on a spectrum of autism, were familiarised with the rest of the school. This traumatised me because all my life autistic children have been my friends,” Devangana tells HerStory, adding her mother is a psychologist who treated children with autism spectrum or learning disabilities and other undiagnosed needs.

“I just hung out with them like my best buddies, asking for nothing in return, just friendship, camaraderie, and fun,” she recalls.

Disturbed at the way autistic children are handled in schools, Devangana, the CEO and Founder of Brain Bristle, sought permission from the school administration to work with Sahil after school hours.

“He was non-verbal, so I brought him home and asked him to type out the music he would listen to. I introduced him to music around the world. Today, he plays the guitar, and recently, he graduated from high school and went on his prom dance,” she says.

This experience pushed Devangana to pursue a Dual MA in Autism and Intellectual Disabilities from Columbia University, New York, in 2009.

She was also the Learning Enhancement Specialist at Jakarta International School, where former US president Barack Obama also studied, and Hong Kong-based school, before she returned to India in 2018.

“I met varying neurodiverse children who wouldn’t fit into any regular high schools, threw tantrums, and were violent, but were extremely intelligent. I helped start a school in Hong Kong where I was an advisor. I helped create a curriculum focused on autistic children and inclusive classrooms to get these kids at the same age and pace as the rest of the children in Honk Kong,” Devangana says as she recalls her work in China.

In November 2021, Devangana launched Mumbai-based ﻿Brain Bristle﻿ to work with autistic children individually at a deeper level to bring out their best of abilities.

“I didn’t want to give them a standard course, which teaches them how to behave normally like other kids. Instead, I wanted to understand their strengths and bring them out in a way they can feel confident and motivate themselves. Autistic children are different for a reason. They can shake up systems if given the right guidance,” she says.

Devangana believes practitioners, teachers, and therapists need to be careful while diagnosing children with any disability or label because it can become their lifelong identity, breaking out of which can be extremely hard.

“This keeps children either oppressed by their label, or has them use it as a crutch, or they're found rebelling against it, instead of finding their way through it peacefully at their own pace, time, style, flow, and tact. Brain Bristle works on gently facilitating the journey of these children in whichever direction they like, rather caging them in compartments, checklists, or stereotypical rulebooks, or sanctuaries,” she adds.

At Brain Bristle, Devangana works with every child for at least 16 weeks using the Reggio Emilia Approach — an educational philosophy that recognises strong potentialities in a child, which can be developed through language and helps in their growth along with others.

She claims to build strength, courage, confidence, and expertise in a nuanced area while balancing it with other “worldly” acceptable qualities and traits through knowledge building.

Challenges of working with autistic children

Working with autistic children can be tricky and painful as they can be violent and stubborn. Devangana says there have been times when children have completely refused to be functional members of society. In the beginning, they have bitten her, abused her, and spammed her with pornography in that process, but it didn’t stop her work.

“To bring them from complete darkness to light is always a challenge. While families try to institutionalise them and make them robotic with the help of therapists and instructors, I push them to recognise their intelligence,” she says.

Bridging the gap for autistic individuals

While Devangana has a strong determination to work with autistic children — not shaken up in the last 14 years — she says she is prioritising her physical and mental health to maintain her sanity.

“I meditate for two hours and exercise every day, so when I get smacked emotionally, I do feel the push, but after 30 minutes, I can see it logically rather than personally,” she says.

At present, Devangana is focused on recruiting more kids with autism in her cohorts by working with schools in Mumbai. She aims to build voice and advocacy for her work worldwide.