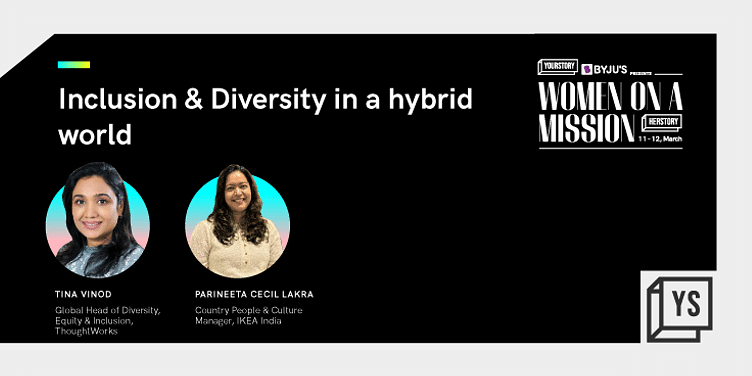 IKEA’s Parineeta Cecil Lakra and ThoughtWorks’ Tina Vinod talked about how they are working away tirelessly to build a diverse and inclusive workplace in a fireside chat at HerStory’s Women on a Mission 2022 summit.

The Covid-19 outbreak made the professionals turn their homes into offices. Working from the couch became a norm and the hybrid workplace has become a globally accepted trend. But building a thoughtful, inclusive culture with gender equality in a hybrid workplace is the next milestone that companies are now striving to achieve.

“We can say historically things are better for women today. But I would argue that there needs to be so much more change. And there's a lot of data to prove that as well,” said Tina Vinod, Global Head of Diversity, Equity and Inclusion at ThoughtWorks.

Tina was speaking at HerStory’s Women on a Mission 2022 summit along with Parineeta Cecil Lakra, the country people and culture manager at ﻿IKEA﻿, as YourStory’s Senior Editor Ramarko Sengupta steered an in-depth conversation.

Speaking about ThoughtWorks, Tina highlighted that with its offices spread across 17 countries, 48 offices, a number of programs and initiatives have been undertaken to create an impact as an organsation both within and outside.

A few of these initiatives include Vapasi – free technical training for women who have taken a career break and want to get back to tech, Interning with Pride for the LGBTQI+ community, Women at the table–a gender gap application development project for an organisation associated with the UN, among others.

Parineeta on the other hand focused on IKEA’s vision of being a humanistic place and hiring based on culture and values. IKEA has been present in India since 2014 and has had retail operations active for three years. This year, IKEA is looking to strengthen its presence in Mumbai while also starting with a physical presence in Bengaluru.

“As we hire for our roles across Bengaluru, we are looking for future coworkers, who not just bring passion for home furnishing, but also find an anchor in our values. And that's when I think the magic will happen to build an inclusive, equal, diverse culture and a workplace,” she added.

Tina believes that a key aspect of ensuring diversity, equality and inclusion goals in an organisation is to integrate these within programs and initiatives. From the last two years, ThoughtWorks has been working towards the UN Sustainable Development Goals (SDGs) including good health of the company, education of daughters of sex workers, equipping female students with access to affordable technology, among othe things.

“When it comes to PoSH (prevention of sexual harassment) policy, our policy has always been gender neutral and it supports every individual's… an employee's right to work in ThoughtWorks. That is the approach that we've taken. There is a zero tolerance approach to harassment and sexual harassment in the workplace,” she added.

Parineeta echoes Tina’s sentiments and believes that India stands among the few countries in the world where there is a clear ruling on prevention of sexual harassment at the workplace. She further emphasised that the starting point for prevention is actually awareness.

“I think it's a mindset. It's about understanding the gravity of the challenges that we face in the workplace in context to prevention of sexual harassment at workplace. So that's where we are, and we open it up for all our co-workers irrespective of gender, we ensure that we also include our vendors and our partners who have their co workers either working on our premises or working for us, at holistically as a community as well, we can lift and improve the experience at the workplaces,” she added.

Parineeta has one key advice to the youth who want to enter the workplace and women or post retirement people coming back to the workplace – “Be unapologetic of what your needs are? Be vocal and be verbal about your needs.”

She further urges the community to redefine the way we've traditionally known workforce contracts to be in. Organisations should remember that they have a responsibility towards societies and should work towards supporting and minimising the impact on livelihoods for the co-workers.

A shout out to the sponsors of Women on a Mission Summit 2022, an Initiative by HerStory, by YourStory - BYJU’S, the presenting partner, and other sponsors - ﻿Kyndryl﻿, Sequoia Spark, ﻿Zilingo﻿, ﻿Atlassian﻿, ﻿Akamai Technologies﻿, ﻿Freshworks﻿ for Startups, and Netapp Excellerator.