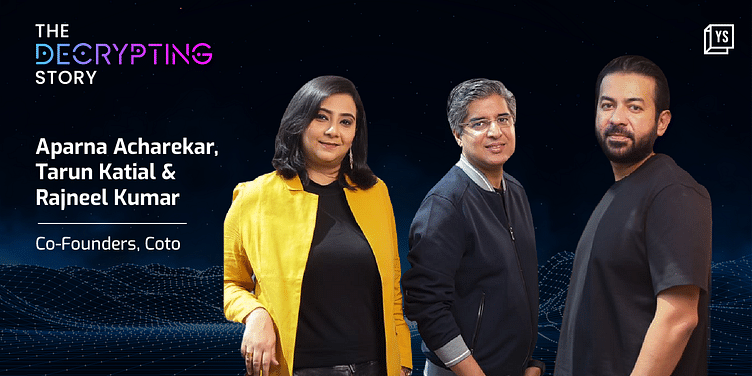 Most of us live terminally online. We often rely on the internet to get things done, so much so that being online has touched even the more traditional parts of our spaces today, like offices being replaced with video conferences.

While it can be an exciting place to be, the internet can become an extremely hostile space. A recent report by Forbes found that cyberbullying still continues to plague the internet. In recent times, it has also been viewed as a catalyst for severe mental health concerns like body dysmorphia, especially among young women. Minorities, especially those who belong to the LGBTQIA+ community, people of colour and women are often targets of slander, which is why a safe space for these communities comes up in conversation regularly.

For ex-Zee5 Chief Executive Officer (CEO) Tarun Katial, these issues became clear when his wife found herself at the centre of a relentless troll episode. “In April, a stranger started stalking my wife and sending her offensive messages on WhatsApp,” Tarun tells The Decrypting Story. "I urged her to report the incident, but Monisha replied that many women encounter similar trolls every day and what real action would the police take even if they found the offender," he adds.

Soon after this, Tarun approached his colleagues Aparna Acharekar and Rajneel Kumar on building a safe space for women, which is when coto came into being. “The very thought of building an empowering platform for women appealed to me because the internet with everything it has to offer has also become one of the biggest propagators of toxicity that surrounds women. I quit two decades of my corporate life, in a bid to address the challenges that women face online,” says Aparna.

At the outset, ﻿Coto﻿ is a Reddit-like forum. It can be simply described as a community platform offering support, resources, opportunities and interactions for anyone seeking it.

Members can join various communities such as Unstereotype Us, where users discuss periods, menstrual health, careers, relationships, achievements and moments. Just like any other social media platform, they can also post content, comment, clap, report, discuss and connect with other users and are encouraged to share their life stories with others.

Besides the social media functions, they can set up online merch stores and sell products to other users through this app. Users can also use it to offer courses, consultations, boot camps and workshops and earn money.

Helping users monetise their work is essential to the company’s mission, “We rarely get rewarded for the content we post on social media, we want our community members to monetise through coto,” Tarun expresses.

While there are several web2 communities like Sheroes, Idiva and others, there are not many apps where women can share, curate and earn simultaneously.

“Today, social media feeds are flooded with pretty pictures, and little is discussed about the important topics that women want to talk about. Even if it is discussed, a lot of women are subjected to trolls for voicing their concerns. Noticing this, through blockchain tech we decided to create a safe space for women, where they can have conversations on sexual health, menstrual health, harassment at work, online sexism, and others,” says Tarun.

Of course, the idea to create a monetisable web3 space isn’t new.  Other web3-native social platforms like Wall.app, Chingari, and CrowdPad, already offer these services. But what sets coto apart is that the app is exclusive for women and non-binary people. The focus is on ensuring that users generate content across all formats through picture videos, memes, GIFs and others, says Tarun.

Bringing in the users

For any new social media platform, the goal is to bring in as many users as possible. When coto went live on Play Store recently, it offered 5000 Non-Fungible Tokens (NFTs) for anyone joining the platform. To make its NFT offering stronger, it onboarded Vishakha Singh, former Vice President (VP) of WazirX NFT Marketplace.

“During my time at WazirX, I wanted to do more in terms of educating women about web3 spaces and introducing women-centric programmes. I wasn't able to accomplish that,” she says, adding that this was also why she was motivated to join coto.

“As an NFT artist or creator you just have to create your artwork and sell it and that is otherwise impossible in the real world where safety is the biggest concern. If you are a female singer and you are looking for a chance from a music composer and we have heard enough #MeToo stories. If you are a female artist you need to be the beck and call of a curator or art gallerist. These are very gender specific,” says Vishakha Singh.

Estate Protocol wants you to own land via NFTs, here’s how

Safety is an important feature for coto. This is why it is employing Polygon’s Zero Knowledge (ZK) technology for an added layer of security. (It is an Ethereum Layer 2 scalability solution that uses cryptographic zero-knowledge proofs to offer validity to the off-chain transaction).

“This will ensure that we do not steal your biometric data, your identity data, it will only be on the chain, and we will only confirm who you are,” says Tarun.

In order to keep the service exclusive to women, it is enabling measures like two-factor tests. Here’s how it will work: users will be required to submit a government ID while signing up. Once they do this, they will be required to complete a video recognition test which will be cross-checked with the government ID. After multiple thorough checks, a user can be allowed in.

Safety for all of its users is critical to coto. Central to its philosophy is ensuring a safe space for trans and non-binary people. In this regard, it is working on a referral programme to help onboard new users on the app.

It has tapped, researcher and social worker, Sai Bourothu as coto inclusivity advisor who will look into all matters related to transgender and non-binary users.

Through Sai’s referral code, members from the community can join the app. “Sai will also look after moderating homophobic conversations on the app and will help us with setting up community guidelines,” says Tarun. It also offers moderation rights to all users in a bid to keep the spaces on coto safe.

However, while coto can ensure several checks and balances, there is no way to ensure the platform is entirely foolproof. “I cannot assure that this will be 100% safe space, but we control recommendation engines, we control who can come on the platform,” says Tarun.

A large chunk of coto’s security processes is conducted with artificial intelligence (AI), which has been developed with the help of Amazon Rekognition services. In order to train the AI to mitigate bias, the company says it is working with Rekognition’s databases for gender detection. “So we're trying as much as possible to create a space that is far better than what we've seen on social media today,” he signs off.

Recently the startup raised an undisclosed amount of funds from Jungle Ventures, a Singapore-based Venture Capital firm. In the future, the startup also has plans to launch its native token.

(The story was updated to correct a typo.)