There’s more to the BengaluruITE.biz 2016 than a 3-day event 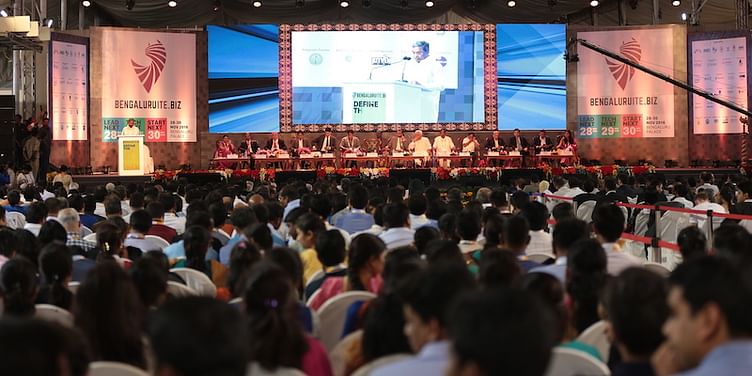 The recently-concluded 19th edition of BengaluruITE.biz set the tone that the Karnataka government hopes to play out in 2017 -- that of digital inclusion. As IT, BT, and Tourism Minister Priyank Kharge says, “There is a lot of work to do to meet expectations.”

With its theme of ‘Define The Next’, this year’s event encompassed the entire gamut of new-age technology from gaming, virtual reality, animation, robotics, cyber security, artificial intelligence, big data sciences, and startups.

Kharge, who spearheaded the three-day event, was a busy man as he successfully co-opted the industry across the country, signed meaningful MoUs, launched challenges, facilitated the launch of the Grameen wi-fi scheme, and announced partnerships and centres of excellence.

The minister lauded Bengaluru’s startup-friendly ecosystem and added that the Centre also acknowledged the state government’s work in this sphere. He added that the Karnataka government wants to retain Bengaluru’s number one position in the country in IT and related industries.

Here are some highlights and takeaways from BengaluruITE.biz 2016

Visitors and speakers: A wide variety of speakers were on hand to discuss how technology can be a creative disruptor. The event clocked 2,000 plus visitors every day.

Startup awards: The government recognised new-age entrepreneurs through the Startup Karnataka Top Tech Awards, and 25 tech startups from across the state, including tier 2 and 3 cities, were awarded in different categories.

Agri-startup funds: After the tourism department which set aside Rs 2.5 crore for funding startups , the department of agriculture has come forward with a Rs 10.5 crore special fund for startups in the agricultural sector which can make a social impact.

Creativity World Forum (CWF): The forum was started in Belgium in 2003 as a platform for showcasing entrepreneurial innovation. Karnataka is the only Indian state on this list which features Barcelona, Catalonia, Flanders, Oklahoma City, Ireland, Rio de Janeiro and others. The CWF is all about creative industries and how to create an ecosystem where local governance includes these. For example, the forum studied how Karnataka’s Channapatna toy industry and its accompanying culture could be included in the state’s governance.

MoUs galore: The state government signed many MoUs at BengaluruITE.biz 2016. The most successful one was with Japan under which students from across the state identified and selected for skill development will visit Japan for training and even get a chance to be employed there.

An aerospace agreement was signed with France. Incidentally, Karnataka was the first in the country to notify an aerospace technology park in Belagavi.

An agreement was signed with Netherlands’ The Hague city. The MoU focuses on collaboration in the fields of technology for elderly care, genetic research, startups, and cyber security.

Making dropouts employable: According to the minister, only 7 percent of graduates in the state were employable, and the state government was planning to roll out a programme with industry help to make these students and dropouts more employable.

Home-grown support: As startups require broadband with excellent speeds and efficient bandwidth, ACT Fibernet, India’s third largest fiber-optic broadband provider, has partnered with the government to connect startups at a concessional rate. This has prompted many other telecom companies to come forward with similar schemes.

Awards: IT major Infosys bagged the IT Ratna of Karnataka award for the company’s consistent and outstanding performance in IT exports in the above Rs 10,000 crore category, and for being the highest exporter and employer in Karnataka.

Apart from Infy, 22 other companies were awarded for their respective contributions to the state, with 10 bagging the IT Pride of Karnataka awards given away by STPI and the Karnataka government.

Contribution to national exports: Exports from STPI units in the country in the IT sector amount to about Rs 3 lakh crore, of which STPI units from Karnataka have contributed about 40 percent, or Rs 1.25 lakh crore. STPI units of tier 2 cities such as Mangaluru, Hubballi-Dharwad, and Mysuru have contributed to IT exports worth Rs 4,000 crore.

Grameen wi-fi: Karnataka Chief Minister Siddaramaiah launched a first-of-its-kind Grameen Wi-Fi as a pilot in 11 gram panchayats. The rural Wi-Fi services can be accessed by people at low costs starting from Rs 30. It is a pilot by Keonics, a state government unit, along with BSNL and will soon be available in all parts of the state.

Grand challenge: The CM also launched the Grand Challenge Karnataka — a government initiative under the multi-sector Startup Policy to scout for new technologies and innovations that can offer solutions to some of the problems in the state.

Centres of excellence: Three important initiatives were launched with centres of excellence being set up in the aerospace, big data sciences and cyber security sectors. Their focus will be on research and development and training.

BengaluruITE.biz 2016 has truly created a new benchmark. And, the expectations too have gone up. “We will deliver,” the minister promises, speaking about the initiatives that the government is expected to come up with next year.

YourStory is a social media partner for BengaluruITE.biz 2016