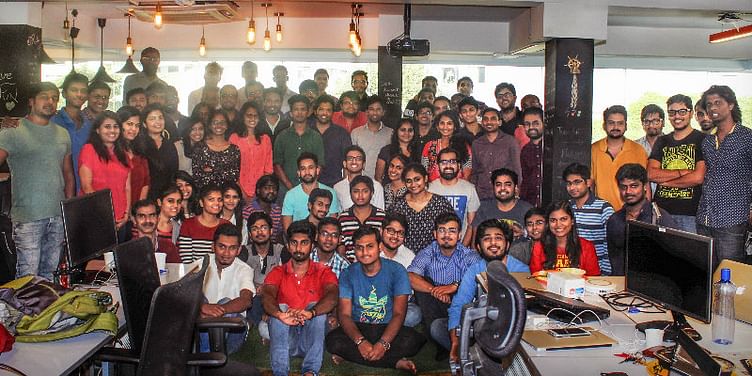 Finomena is the only fintech company from India to have made it to "International Innovator of the Year award" by LendIt USA 2017, the world's largest show in lending and fintech. Finomena has also been featured among the top 10 mobile startups from India at YourStory's MobileSparks 2016

When Riddhi Mittal and Abhishek Garg met through a mutual friend, a casual conversation about themselves led to the issue of loans and how Abhishek was refused one despite having a good academic and professional background. Upon further discussion, they came to the conclusion that the issue is, unfortunately, widespread in India. Banks provide loans to people who have good CIBIL scores, while those with mediocre scores, or none at all, are not considered credit-worthy at all.

Twenty-six-year-old Riddhi, who did her graduation and post-graduation from Stanford University, wanted to solve this problem of credit access by leveraging the potential of big data, machine learning and artificial intelligence. According to Riddhi, while one might not have the data required for risk assessment through traditional methods, he or she leaves behind a massive digital footprint. Utilising such data to enable the provision of loans appealed to Riddhi.

Abhishek, meanwhile, has had experience in unconventional finance in the past, having worked with Muhammad Yunus, who has pioneered the concepts of microcredit and microfinance, to set up the Grameen Foundation’s impact funds. It was in October 2015 that the duo translated their vision of solving the inaccessibility of credit into reality with the birth of Finomena.

Bengaluru-based Finomena uses data and machine learning to reassess the creditworthiness of borrowers for the disbursal of loans. It provides small ticket loans with small tenures. Traditionally, a lender gauged creditworthiness mostly on the basis of the credit score of the borrower; Finomena, however, wants to change that, by making use of data points beyond simply a credit score, laying emphasis on the approach to payment as well.

Instead of relying purely on a credit score, Finomena assesses the creditworthiness of the borrower based on more than 22,000 data points analysed by their algorithm. They can collect the data from the very beginning of a loan application process.

Though Finomena offers small ticket loans with small tenures, it was often mistaken for a payday loan or P2P player. A payday loan comes with an average term of two weeks, with loan values typically ranging from $100 to $1,000, depending on state legal maximums, and a typical annual percentage rate of almost 400 percent.

“We are handing out small-ticket loans to these people by evaluating their creditworthiness using alternate data in the absence of any credit score,” says Abhishek (28), an alumnus of IIT Delhi who worked with UBS Investment Bank in Hong Kong, spent two years in BCG’s Financial Services, and then worked in global PE fund Bain Capital with a focus on investing in FIs in India.

The startup had, in March 2016, raised an undisclosed amount of funding from Matrix Partners in its first round of capital infusion. Finomena was supported by eight to ten industry veterans who joined that round as angel investors.

One can visit the Finomena website and go through the form and upload documents on the website itself. The startup is also launching the offline dealer’s empowerment programme, through which they will hand out tablets to laptop, phone and consumer durables dealers; people making purchases at these stores can apply to Finomena, upload the required documents and get a loan in the offline store.

“We use only Aadhaar biometric authentication at these stores to ensure complete compliance and no fraud on KYC norms,” says Abhishek.

Finomena acquires borrowers both through online (web and app) and offline (point of sale) channels. The Android app has seen more than 250,000 installs in the last four months. The startup is present in about 300 stores offline and will be scaling its offline PoS footprint to around 1,000 stores in the next six months. Finomena generates about 8,000 applications a month for small ticket loans with its $1.5 million in bank accounts.

Apart from the funding from Matrix Partners, Finomena is also backed by angel investors from industries like banking, NBFC, MFI and global hedge funds.

The ticket size of the loan ranges from Rs 5,000 to Rs 3 lakh for buying electronic devices like laptops and phones. The maximum tenure of Finomena for providing loans is 12 months.

Most of our users are under the age of 30, have never taken out a loan before, earn less than Rs 30,000 per month, and are typically buying their first appliance/device on EMI,” says Abhishek.

Finomena has a team of 75 people. The venture claims to be the first SME lending startup to provide loans through a paperless process. Currently available pan-India via its app, the startup is planning to increase its offline presence in 10 cities by next year.

P2P lending plays a crucial role in addressing the financial gaps in the country and thereby minimising the constraints potential borrowers face in accessing fast and cheaper finance. The lending market has now gone a few steps further with the emergence of a handful of startups who allow shoppers to buy products without credit cards.

Bengaluru-based ZestMoney gives instant EMIs to online customers, thereby enabling shoppers with no credit card history to shop as much as they want. Mumbai-based Kissht provides collateral-free loans for products that consumers want to purchase, like mobiles, laptops, jewellery and furniture. Bengaluru-based Quicklo, meanwhile, uses more than 1,000 data points to build an underwriting and management strategy. The startup is catering to a segment that does not have a credit history or a CIBIL score.

With so many entrants passionately seeking to change the sphere of consumer loans for the better, the future of lending indeed looks bright.