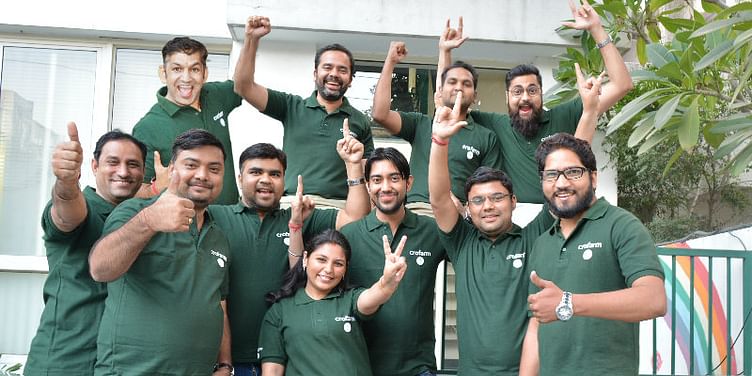 Delhi-headquarted agri supply chain startup Crofarm buys fresh vegetables and fruits directly from farmers and supplies them to online and offline retailers in an efficient manner.

The agricultural supply chain in India is marked by inefficiencies at all levels and is exploitative as well. A recent estimate by the government pegs the preventable post-harvest losses of foodgrains at 10 percent of the total crop output, which translates to 20 million tonnes of foodgrains. The quantum of losses for perishable farm produce like vegetables and fruits is considerably higher. Adding to everyone’s woes is the presence of layers of intermediaries who serve to deny the farmers a fair price for their produce.

Aware of the massive losses on account of the logistical mess in Indian agriculture, Varun Khurana and Prashant Jain proceeded to address the problem with Crofarm, a technology-backed farm-to-business (F2B) supply chain startup they founded in May 2016.

Pursuant to its goal of providing better price to farmers and supplying businesses with the freshest produce in the most efficient manner, Crofarm procures fresh fruits and vegetables from farmers and delivers them to both online (Big Bazaar, Metro Cash & Carry, Bigbasket, Grofers) and offline retailers (neighborhood fruit and vegetable shops).

Crofarm currently supplies nearly 8-10 tonnes of fruits and vegetables from its two distribution centres in Delhi NCR. In the last one year, it has built a network of more than 100 retailers and more than 5,000 farmers that use their services.

They built expertise and systems in handling perishable fresh produce to cut down on wastage.

“Our revenue model is pretty simple -- we procure fresh fruits and vegetables from farmers and deliver them to retailers after marking it up with our margins. Our only direct competitor is the mandi and we are better by at least 10 times,” says Varun.

Headquartered in Delhi, Crofarm has offices in Mumbai and Bengaluru. The startup will soon be opening regional offices in cities like Hyderabad, Orissa and Jaipur to expand business.

Varun and Prashant were running Mygreenbox, a smartphone-based grocery delivery platform. Their work entailed managing the supply chain for procuring fruits and vegetables from the mandi and then distributing the same through Mygreenbox. It was here that the duo became very deeply interested in what happens behind the mandi.

The duo invested a significant amount of time visiting farms across Punjab, UP, Uttarakhand and Haryana, and became familiar with the challenges the farmers faced. They even attended various agri-based conferences, and in one such conference, they came to know about a bunch of companies that sold fertilizers, pesticides and farm machinery to farmers.

According to Varun, the topmost challenge for any startup is making sure there is enough funds to take it through the take-off stage.

Fortunately for the Crofarm team, Mukul Singhal and Rohit Jain, former SAIF Partners principals, along with a couple of angels -- Rajan Anandan (MD, Google India), Jitendra Gupta (MD, PayU India) -- invested about $1.5 million seed fund in the startup when it was barely a few months old. What helped was the duo’s experience in setting up their previous venture, Mygreenbox (which got acquired by Grofers in April 2016).

Last month, Crofarm raised Rs 5 crore in a pre-series A round led by US-based venture development firm Factor[e]. Rajan and Jitendra again invested in this round.

Like most startups, Varun and his team made mistakes initially by betting on multiple things at a time. Typically, they tried to outrun themselves by spreading across geographies and trying to pursue multiple models at the same time. But they soon realised they couldn’t go on like that with the limited resources at their disposal.

“As a startup, I think it is very easy to get distracted and lose focus. We hired a few people from this age-old trade and realised after a while that the old way doing things will not cut it for us. We want to re-invent this industry. We are now hiring people with a passion for what we are doing as well as those that have the knack for problem solving.”

Crofarm has closed its first financial year at a topline of Rs 6 crore in FY 2016-17.

A number of startups have mushroomed in the agri space, with each working in niche segments. BigHaat, an agri-commerce startup, empowers farmers by providing them with quality agro inputs and accessories through a marketplace platform.