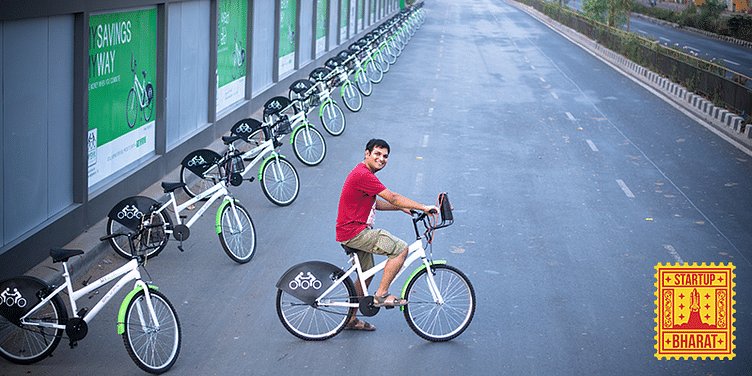 Arjit Soni’s Mybyk has 4,000 cycles on the road in Ahmedabad. The startup, which aims to make urban transport greener, more accessible, convenient, and economical, is now eyeing the next 100 smart cities.

When Arjit Soni was doing his articleship at PricewaterhouseCoopers (PwC) in Mumbai from 2007 to 2010, his commute worsened the daily grind. His hostel was in Andheri; the workplace was in Dadar. Despite offering more than the metered fare, he would never get a rickshaw or a cab to cover the short distance.

One day, he took matters into his own hands and bought two bicycles: one to go from his hostel to Andheri station; the second cycle to go to office from Dadar station. He did this for a few days, but couldn’t continue due to the lack of secure parking spots at Andheri and Dadar.

In 2011, he moved back to Ahmedabad to join his father’s chartered accountancy practice, but the idea of bicycle sharing had stuck. The successful implementation of this system - Citibike in New York and Barclays Cycle Hire in London - fueled his hopes of replicating the idea in Ahmedabad.

After research, Arjit decided to take the entrepreneurial plunge. He quit his father’s consultancy and in 2014 started Mybyk, an Ahmedabad-based premium bicycle-sharing and renting service. The sustainable cycle-sharing service aims to make urban transport more accessible, convenient, and economical, help people switch to a healthier lifestyle, and create a green future for the next generation.

However, Arjit was surprised at how expensive these solutions were despite large subsidies from the government and funds from the likes of Citibank and Barclays. “Being a chartered accountant, I worked out the business model myself. I soon realised that bicycle sharing could be a self-sustainable social venture in India,” he says.

Arjit claims to have built the first large-scale bicycle sharing network in conjunction with the city’s Bus Rapid Transport System (BRTS). Combining convenience and technology has helped address the problem of first and last-mile connectivity, he says.

One of Mybyk’s biggest successes has been community building and selling the idea of cycling-as-a-practice but not cycling-as-a-medium. “Before talking about#Bike2Work, you need to have people #GetBackToCycling and we organised rides every week for this,” he says. On-ground community activities like these are now a huge marketing boost for the company, leading to organic acquisition of customers.

Speaking of investing diligently into the assets of the company, he says:

“It is a very challenging business unlike Ola/Uber. Here, you have to own the asset, maintain it, secure it, and redistribute it, something that we have mastered. This is not a hardcore tech play where you can push an update and correct past mistakes. You are investing in an asset here. One wrong decision and you have to live with it throughout the asset’s lifecycle.”

He takes pride in the fact that he bootstrapped the company for the first three years, which gave him enough time to optimise the operational model to scale up.

Recalling that Mobike and Ofo raised large amounts of funding but could not operate in the Indian market, Arjit says many players only tried to replicate what other companies did but didn’t try to learn from their mistakes.

Bengaluru-based dockless scooter riding platform Bounce acquired the India assets of chinese bike-sharing giant Ofo last year, and had launched the cycling services in the city. There is also Yulu, started by one of InMobi’s co-founders, Amit Gupta, and RK Misra, Naveen Dachuri, and Hemant Gupta in 2017.

Mybyk has grown from a lean team of seven to a staff strength of 60 members now. Arjit says their business model is simple: they sell the experience of cycling, but not cycles as a commodity.

Why start up in Ahmedabad?

“The reason to start up in Ahmedabad was simple. I had the home advantage and I could garner the needed support to start with a pilot at BRTS. However, the city is infamous for being a retailer’s graveyard and the weather isn’t as conducive as Bengaluru’s,”  Arjit says.

“I never saw any issues regarding acceptance. Contrary to general perception and the social stigma surrounding bicycle sharing, it is now a lifestyle statement.”

The user needs to download the app and sign up to use the service. When a user gets off at a BRTS station, they can unlock the bike from the station using the app. While returning, the user can ride back to the same BRTS station and end the ride. The rental charges get deducted from the wallet automatically, depending on the selected plan.

“We charge Rs 19 for the first hour and Re 1 for every hour thereafter. Thus a round trip (BRTS– office–BRTS) ends up costing just Rs 30. That’s just Rs 15 one way,” Arjit says.

For the B2B model, the company offers two services: SmartBYK and Hire. With SmartBYK, the company has a fixed billing cycle for businesses for services like bicycle rental (comprehensive rental including repairs and maintenance), tech, customer support, and bicycle redistribution.

He adds, “The client gets the discretion to decide the pricing, which can be free or chargeable. We collect that revenue on behalf of the client and pass it on to them. In other words, the system pays back.”

Arjit says Mybyk has been an EBITDA-positive company since its second year. Their fleet size is now at 4,000 cycles; he aims to grow it to over 10,000 cycles in the next two years.

Mybyk’s B2C offering is now available in Ahmedabad, Mumbai, and Udaipur. As far as B2B is concerned, the company claims to have customers across India. It currently counts Reliance Industries Limited (900 cycles), ISRO (300 cycles), Adani Shantigram, and Baxter among its clients.

The startup is eyeing expansion to all BRTS stations in Ahmedabad with a fully automated, IOT-enabled dockless bicycle-sharing service.

“With only four stations covered currently, we are very excited at the upcoming opportunity to expand our BRTS pilot to 300 cycle stations in Ahmedabad; of these 30 will be BRTS transits. Subsequently, we want to replicate the same to all other cities. With 100 smart cities coming up, the opportunity is huge,” Arjit says.