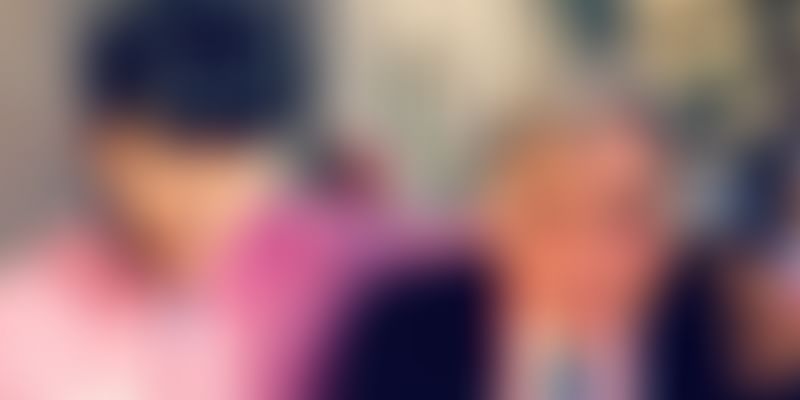 Shantanu Naidu has been working in Ratan Tata's office for the past year-and-a-half and says the experience is full of learning every minute, every day.

It is a job profile that any Ivy League professional would give a tooth and nail for. But for 27-year-old Shantanu Naidu bagging an enviable executive position in Ratan Tata’s office was the unplanned result of ‘giving’ of another kind.

Shantanu has been working with the legendary business leader, investor, philanthropist, and Chairman Emeritus of Tata Group Ratan Tata for the past year-and-a-half. His job includes assisting Ratan Tata in his startup investments and providing executive assistance.

What better learning could a young millennial ask for? Though Shantanu graduated with an MBA from Cornell University, for all practical purposes he may as well be onto his PhD under the tutelage of Ratan Tata.

In a telephonic conversation, Shantanu tells me, “It is an honour and a once-in-a-lifetime opportunity to be working with Mr Tata. It is full of learning every minute, every day.”

As everyone knows, the 81-year-old doyen of the Tata Group is a passionate believer in India’s startup ecosystem having invested in more than a dozen startups in his personal as well as official capacity.

In June 2016, Ratan Tata’s private investment company RNT Associates and the University of California’s Office of the Regents (UC Investments) joined hands to fund startups, new companies, and other enterprises in India as ‘UC-RNT funds’. Around the same time, RNT Associates also made several investments to back Indian entrepreneurs and build the startup ecosystem.

Although most of Ratan Tata’s investments are undisclosed amounts, startups that succeed in getting Ratan Tata on board are excited about reasons that go beyond financial benefits. After Ratan Tata’s investment in Ola was declared, CEO Bhavish Aggarwal said that it was "a huge endorsement from one of the most respected business leaders of our times and reflects Ola's commitment towards the future of mobility in India.”

It is no wonder then that Shantanu has never felt any cross-generational gap in his interactions with Ratan Tata. “That’s because he is in touch with all the latest trends in technology or otherwise and there is little opportunity where I go and say, ‘Oh! I need to show you something new.’ He has probably seen everything,” says Shantanu, adding, “I do add my millennial perspectives on a lot of things, which he really appreciates, but what I have seen in this relationship is what a fine businessperson, a refined gentleman, and an empathetic individual looks and acts like.”

An act of kindness

And what better example of how Ratan Tata acts than the backstory of how Shantanu came to be working in his office.

In 2014, Shantanu was working as an automobile design engineer at Tata Elxsi in Pune. During his late-night commute that took him through the Viman Nagar highway, he would encounter carcasses of dogs on the road that had been run over by speeding vehicles.

This disturbed him making him wonder how he could save the lives of the street dogs. “I spoke to citizens who have been in road accidents involving dogs, and the issue wasn’t just visibility; it was visibility with enough time for the driver to decide which way to go without risking his life. Since I was an automobile engineer, an idea struck me to make collars for the dogs that would make them visible in the night even without streetlights,” he says.

After various trials, Shantanu came up with a dog collar made with the best industrial-grade retro-reflective material on a bed of used denim that he and his student volunteer friends collected through a donation campaign. “I was 23 years old then and my friends and I did not have the funds to go big with it,” he tells me.

But this small effort, which they call Motopaws, did not go unnoticed.

Shantanu’s idea of reflective collars for street dogs was saving their lives in the night and people were sending constant feedback saying it was an innovative idea and that it helped them avoid running over a life because of low visibility.

This small but important feat was written about in the Tata Group of companies newsletter and came to the attention of Ratan Tata, himself a dog lover.

“People told me to write to Mr Tata about this.” Shantanu did, and for a long time, nothing happened. “It was understandable; I mean it’s Mr Tata! But my father was hopeful.” One day, Shantanu received an invitation to meet Ratan Tata at his office in Mumbai.

“Mr Tata expressed a lot of love for what we were doing given his immense love for street dogs and asked me what kind of support we would like. I said we were not looking for any support but us being students, he insisted and made an undisclosed investment in our endeavour,” says Shantanu.

Motopaws was funded not from any investment engine, but from Ratan Tata’s own pocket owing to his love for dogs and the innovative concept of saving their lives from speeding vehicles.

With the investment, Motopaws has scaled to 11 different cities in India. “Recently, we received requests from Nepal and Malaysia. We already have an all-women team in Nepal. We are also exploring larger animals like cows, etc, which also lose their lives when they stray on the highway,” says Shantanu. In addition, Motopaws is now training their cadre of volunteers in advanced first aid for street animals.

This self-taught vet in Kolkata has treated over 2,500 stray dogs in his own home

In a month, Motopaws manufactures 500 to 1,500 collars, which have been updated in design recently and is water- and fungus-proof with a new buckling mechanism that has been recently upgraded.

Motopaws keeps evolving its design after receiving credible feedback from the animal welfare community. It has trained volunteers in all the 11 cities that help with the collaring. "There is always a waiting line-up for being a Motopaws volunteer and it's touching to see so many people wanting to be a part of this," adds Shantanu.

Following this association, Shantanu kept in touch with Ratan Tata, often seeking his advice and mentorship. “I am the fifth generation in my family working with the Tata Group mostly as engineers and technicians. We weren’t executives, and we have never met a Tata. There is this sentiment towards serving a group that has such high ethics and corporate responsibility. I always imagined myself ending up working in a high social impact organisation like the Tata Trusts,” says Shantanu.

“After his investment in us, I continued to stay in touch with him and would talk to him about different topics and issues, and our friendship developed. One day, I told Mr Tata about my plans to leave for an MBA at Cornell. As soon as I was accepted at Cornell, I informed Mr Tata about returning to India after graduation to find an opportunity to contribute to the Tata Trusts. "

In his second year at Cornell, Shantanu focused entirely on entrepreneurship, investments, startups, preparing pitches for interesting business ideas, how venture capitalists think and operate, how to identify credible startups, and the key industry trends, etc.

"Cornell has a very grassroots entrepreneurship programme and several incubators that give you a thorough entrepreneurial orientation. I interned with the Tata Trusts and with Cornell University on Mr Tata’s pet project of building a veterinary hospital in Mumbai. I was put in that team before I graduated which, incidentally, is coming along very well now. By the time I came back, I had the additional qualifications of the entrepreneurial world, which I felt very passionate about,” he says.

Thus, when Shantanu returned with his degree, it was expected he would work on the same veterinary project. “But it turned out that Mr Tata had other plans. He asked me to join his office instead. That was in 2018. And, since then, I have been working in his office,” he adds.

For Shantanu, it has been an intensive training. Having observed Ratan Tata from such close proximity, he says, what struck him the most about Ratan Tata is his refined personality.

“The refinement part is very important. A lot of accomplished people share motive, intention, and passion. But the chiseling and polishing, and not cutting corners is something that is worth learning from him. These are things he teaches intentionally and sometimes it is a by-product of what he does. That is priceless. The finesse, the articulation, and analytical thinking that he brings to the table is something I constantly learn from.”

Shantanu hopes to compile his list of learnings from Ratan Tata sometime in the near future, but nonetheless shares some of it here.

“Mr Tata's mind is extremely sharp and to be in his presence and see how he makes his decisions is an education of its own. The best part is his wit and humble nature. You will never feel like you are working with Mr Tata, because he does not have that barrier that says, 'I am this and you are that'. He has never made me feel intimidated or threatened or scared about learning something. He is always encouraging in that sense. Not just to me, but to everyone that comes his way.”

Through all this, their friendship and the bond they formed through a common cause still grows. “It is a product of several years. I would say anyone who has worked with him has been a friend to him to some extent given how easy he is to work with,” says Shantanu.

Who would have thought that to land one of the most sought-after jobs in the country all he had to do was follow his heart?

Will only invest in ideas that excite me: Ratan Tata