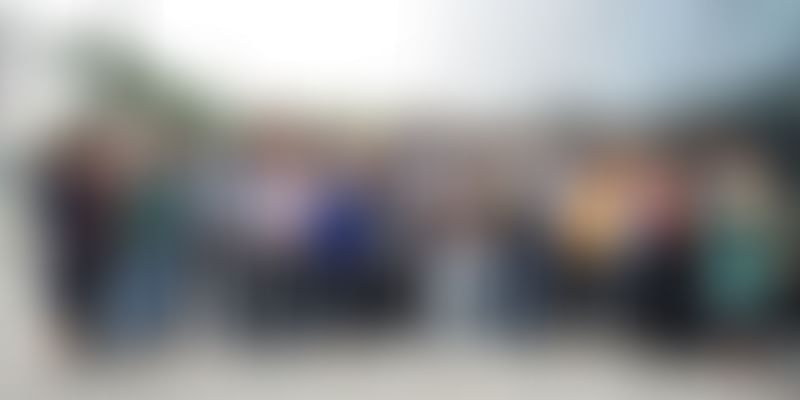 One of them is Noida-based Mall91, which won the government's recent Aatmanirbhar Bharat App Innovation Challenge in the business category. Founded in 2018 by Nitin Raj Gupta and Shubham Paramhans, ﻿Mall91﻿ seeks to fulfil rural India’s online shopping aspirations.

But what is social commerce? As the name goes, social commerce is when social media enables commerce, i.e. businesses leverage platforms like ﻿WhatsApp﻿, ﻿ShareChat﻿, YouTube, etc., to curate, promote, and sell products.

When you look up ‘Mall91’ on Google Search, the results take you to a Hindi website and a Hindi app listing. When you dig deeper, more local languages show up.

And that captures the essence of the platform, which calls itself 'Bharat Ki Dukaan' and plans to reach 400 million first-time internet users in India’s Tier III, IV and V towns and villages.

Co-founder and CEO Nitin Gupta tells YourStory, “Most of the consumer internet in India has been built for metros and Tier-I cities. Businesses were cloned and copied from China and elsewhere. We saw an opportunity to build for small-town India, where content consumption was happening due to the smartphone and data revolution. But, there was no unique indigenous commerce model until now.”

Using an innovative concept of group discount buying and last mile agent-driven community logistics at pincode level, Mall91 is able to bring locally manufactured products at cheapest prices to this new cohort of users making their life's first ecommerce transaction and taking ecommerce to the nooks and corners of India.

Mall91 also has an unique approach of deeply engaging its users through multiple additional high engagement, high frequency use-cases in the form of mini-apps around social gaming, social content, utilities and entertainment.

“We follow a direct B2C aggregation model where people bring in their families and friends. We call it network commerce and it happens in micro-clusters. Even a mohalla can be a network. When you bring in more users and the buying happens in groups, you pay a discounted price for the product.”

A lot of live interaction happens within the app, with users “luring and convincing” each other to buy a product. For two hours every day, a live host demonstrates the product catalogue and users can enjoy a TV-like shopping experience too.

That startup claims to have a presence in over 2,000 locations across India. Since launch, it has witnessed a 5X growth in “all business metrics”.

“We hit a single-day peak of 10,000 orders in November 2019. We managed to grow more than 100 percent in December and January. In the last two months, the topline has grown at about 50 percent.”

Going forward, Mall91 is confident that it can post monthly revenue growth of 50 percent in FY21, and increase app downloads by three to four million.

The massive opportunity presented by 400 million vernacular internet users has turned social commerce into one of the busiest sectors in India’s digital economy.

India is already Asia’s leading social commerce market, according to a recent PayPal survey. The vertical is projected to be worth $100 billion by 2025.

Mall91 competes with the likes of Meesho, DealShare, CoutLoot, Bulbul.tv, Simsim, Shop 101, GlowRoad, and others, in an intensely competitive market.

The sector was actually validated in June 2019, when Bengaluru-based social commerce startup Meesho became Facebook’s debut investment in India, compelling the investor and entrepreneurial ecosystem to sit up and take notice.

By the end of the year, social commerce became the fastest growing segment of online retail in India, with startups raising over $100 million in 12 months.

Mall91 raised $7.5 million in a Series A round, led by Go-Ventures (the investment arm of Indonesia’s Gojek) in October 2019. The round also saw participation from its early backers Beenext, Kalaari Capital, and AngelList India. Prior to that, in December 2018, it had raised a seed round of $1 million.

The startup plans to use the capital to expand its business domestically and internationally. It also looks to ramp up its product, engineering, and supply chain, and add more languages to the platform.

At the time of funding, Go-Ventures’ VP Investments, Aditya Kumar stated, “Mall91's vision and approach can be successful in emerging markets across the world, and we look forward to supporting the company's growth going forward."

Despite ecommerce activity dropping to sub-zero levels in the months of April, May, June, Mall91 has been able to recover in July and hit “close to prelockdown ecommerce volume” in August.

The startup has strengthened its unique community commerce and community logistics model at the APPNIRBHAR BHARAT 59 pincode level, and is taking to scale up the business via that route.

It has also been among the Top 10 apps in the ‘Business’ category in the last few weeks.

In an upgrade released last month, shortly after the government’s ban on Chinese apps, Mall91 added social and communication features to its platform. These include:

a) Wall91 - It lets users create and upload short videos, GIFs, viral clips, and aims to offer a platform to “creators” from banned Chinese apps such as Helo, Vigo Video, VMate, etc.