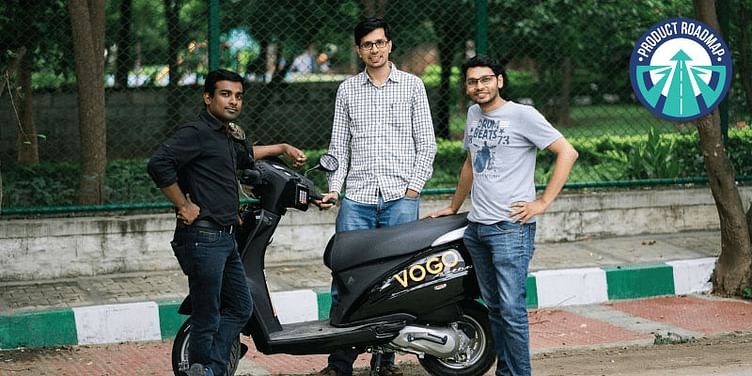 A product roadmap clarifies the why, what, and how behind what a tech startup is building. This week, we take a closer look at Bengaluru-based bike rental startup Vogo, which claims to have grown over 60x and clocked five million rides.

Bike rental startups across India hit a roadblock amid the coronavirus pandemic. Now, as the country unlocks, people are looking for a safe way to commute.

Bengaluru-based bike rental startup ﻿Vogo Automotive﻿ aims to tap this market – in hibernation till for the last couple of months – by using technology. The focus on technology has helped Vogo, which lets you pick up a scooter from anywhere and drop it off once you’ve reached your destination, make a mark in the crowded market.

Explaining how technology and Internet of Things (IoT) helped them, Anand Ayyadurai, Co-founder and CEO, Vogo, says: “From the very early days, we invested heavily in building IoT technology for our scooters. This serves a twin purpose – it makes the entire booking process automated, enables faster scale, and allows us to remotely monitor and control the scooter, ensuring the security of the asset.”

Operating in a post-COVID world

IoT has also allowed Vogo to offer "keyless” vehicles to customers in a post-COVID world. This ensures there’s no human intervention as users no longer need to exchange keys. Once they register with the app, they can use their phone’s Bluetooth to connect with the IoT device on the scooter, and operate the vehicle without a key.

Vogo was started in 2015 with a vision to “democratise access to personal transport in India”.

Realising that all common commute options were either too expensive, time consuming, or unreliable and inconvenient, the founders - Anand, Padmanabhan Balakrishnan, and Sanchit Mittal - thought of making a personal vehicle easily available whenever a person needed to travel.

Today, Vogo competes with the likes of ﻿Bounce﻿, ﻿Rapido Bike Taxi﻿, ﻿Drivezy﻿, and Zoomcar. It is operational in Bengaluru and Hyderabad, available across 500 points, and claims have clocked five million rides. The startup recently raised $25 million in Series C funding.

“After the COVID-19 pandemic hit India, the subsequent lockdowns had a major implication for micro-mobility in cities. We realised that a long-term scooter rental could substitute personal scooter ownership and launched Vogo Keep, which saw a great pull in the market. Over two months after the lockdown, we tried to enhance Vogo Keep with features like home drops and easy renewals; these saw immediate traction,” Anand explains.

To make the Vogo service much safer for customers, the bike rental startup also started a four-step sanitisation process for every scooter. There also is a timestamp of the sanitisation on the app to provide complete information to users before they make bookings.

"We have retrieved 40 percent of our pre-COVID volumes post lockdown, which is highest in the mobility industry so far, and have also introduced two new products, Vogo Now and Vogo Keep, which offer short-term and long-term rentals and a home-drop service. Until now, around more than 50 percent of the customers have booked renewals and 30 percent of them have ordered for home delivery," Anand says.

From a manual model to IoT

Vogo’s first app was Android only and powered by a SaaS app, Planyo, which is a reservation system as a service. The simple Android app, without any maps or fancy animations, simply asked the user to choose pickup location, time and duration, and pay online.

“It took us a couple of months to build this first version with two people, Sanchit and Pawan (android developer, first tech employee at Vogo). They both brainstormed on the technical architecture and developed the app, including UX, UI, Android, backend, and infrastructure, within a few months,” Anand explains.

The founders immediately decided to scale up. Anand says they realised the need to put certain fundamental building blocks in place if they wanted to grow and become a vital part of the daily commute.

“In 2015, we had a manual operating model where a field executive would hand over the keys of scooters to customers. We only had about 200 scooters then; the choice was to push the accelerator on expansion or invest in IoT. Our expansion was critical, but we decided to invest in IoT at that stage. We built a team around it and developed a completely automated Bluetooth-enabled IOT model, which allowed keyless start and automated operating, and ensured zero human intervention,” Anand says.

This exercise took close to six months, but Vogo was then able to scale expansively.

“Today, we have more than 20,000 scooters. We believe investing in technology and building a sustainable operating model early has held Vogo in good stead.”

Since its inception in 2015, Vogo has covered over 13 crore km (highest among all players in the 2W rental industry) and expanded its scooter base to over 20,000+ bikes spread across 500+ docks.

Anand says the team needed to automate scooter pickup and drop, operate with minimal ground staff, and ensure that it maintained and safeguarded the ever-growing scooter fleet.

“We needed robust and scalable technological solutions for this. The app received a major update in August 2018. We hired our first Product Manager, Anmol Deepak, in May 2018; he worked on the revamp. As the number of stations increased around the city, we needed a simpler flow for the user to select pickup and drop stations. Most users are comfortable understanding map views and we decided to go with that,” he says.

They had started with a mandatory round trip flow where users had to return the scooter at the same station, but this ensured flexibility as it offered people the convenience of dropping the scooter at a station close to their destination.

As Vogo scaled up stations, it seemed impractical to have people only for handing over keys. The startup also needed robust solutions to get data related to fuel level, battery level, location etc., and “decided to explore various options”.

With this in mind, the founders hired Abhimanyu Goyal as the lead of their IoT vertical in April 2017. Abhimanyu had previous experience in automation technology and had worked for Sony in Japan. Within six months, he built a team of 80+ engineers by reaching out to his personal and professional network.

The IoT team built an in-house Key Lock Box, which would open by using an OTP that was shared with the user.

“This solution was scaled up to 3,000 scooters in mid-2018, but we realised that it had challenges of its own: users often forgot to return the key after finishing rides, fraudulent users made duplicate keys, and the box was often vandalised as it was outside the scooter,” Anand says.

Given these challenges, the team decided to explore Bluetooth technology as a solution to make Vogo truly “keyless”. Many ready-made solutions from China, Europe, and Israel were looked at, but nothing worked in the Indian use case.

Vogo decided to hunker down and build its own IoT technology.

The operations team would scout for high visibility spots for new stations. To build in IoT, the tech team gathered inputs from several automotive industry experts.

“We studied various electronic, electrical, and mechanical components, and met vendors to figure out what suited our needs. We had to read a lot of vitals from the vehicle, which meant we reverse-engineered several scooters to understand speedometer, odometer, fuel sensor, alternator, battery characteristics, etc. Finally we zeroed in on Honda Activa and built an IoT device that worked well with it,” Anand says.

In the next six months, the team built its first prototype. It was launched in December 2018 and soon scaled to 1,000 scooters. The team did extensive on-ground testing, and analysed user feedback to ensure that they were on the right track.

Anand says, “Basis our learnings, a revised IoT design was piloted in another 1,000 scooters. The feedback was overwhelmingly positive.”

Some of the key takeaways were: super convenient for the user (no need to safeguard keys), safer for Vogo (no duplication of keys possible), and reduced vandalism (IoT box located inside vehicle).

Next, the team realised that instead of scaling the business to lakhs of scooters, it was important to invest in building the right hardware/IoT and automating the entire booking process.

“On average, users were taking 10+ rides a month – a big sign of approval for our product and on-ground service,” Anand says.

Building a referral system to grow

Vogo devised a referral programme in early 2019 and introduced it to high-frequency users. Over the next few months, referrals were a big source of user acquisition.

Apart from referrals, the startup’s on-ground presence at stations has been a huge driver in acquiring customers.

Anand says the data science team considered several parameters around traffic, presence of colleges, student accommodations like hostels and PGs, tech parks, and population density to decide on new areas where stations could be opened.

“Recently, we launched India’s first one-click booking experience for scooters where riders can connect phones to Vogo scooters via Bluetooth, and directly start and stop the vehicle from the app. There is no manual interaction with the scooter anymore,” Anand says.

What comes next for Vogo? The team is closely looking at the electric vehicle space, Anand says.